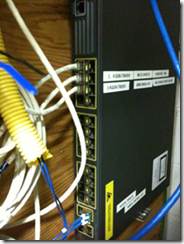 When I was a young boy, my father woke me up one Saturday to assist him on an errand. He was a mailman, and a woman on his mail route needed to have her rural style mailbox replaced after it was damaged by a snow plow. At first, I thought this was part of a mailman’s job, but my father explained that we were simply “doing the right thing.” The woman was a friend; she lived alone, and didn’t have anyone around who could do this task for her. My father reasoned that since we knew how to do it, had the time to spare and owned the necessary tools, it was something we should do. He dragged me along to help, to learn about digging post-holes removing broken posts, and more importantly, about helping others. I have had many opportunities as an adult, to use all of those lessons.

Partly because of that lesson, and the way it and others like it shaped my outlook on life, I found myself in a most unbelievable situation a few months ago. Several businesses in our building were suffering from an Internet outage due to the failure of a fiber switch that we all share. In addition to this group, a technician from the carrier was on site as well as a representative of the building owner. I am being purposefully vague, for reasons which will reveal themselves as we proceed. The switch was bouncing between a powered-on state and a powered-off state. The carrier technician explained the problem as likely being related to the building electrical circuit, despite the fact that other devices plugged into the same outlet, were not affected. Nobody accepted that conclusion, but he would not budge. He said “I would have to see the switch fail while connected to an UPS, before I could recommend swapping out the unit.”

That seemed to everyone present to be the best way to proceed. If there was an intermittent power supply issue, the UPS would probably be able to keep the switch alive during the failures until an electrician could be called. If the switch failed while connected to the UPS, the carrier would swap it out. Great, all in favor of installing an UPS raise your hands – no hands raised. One by one, the people involved invoked the barrier du jour these days “I need to check with legal.” In similar fashion, legal(s) concluded not to proceed. The rationale was simple: “at this point, the problem belongs to the carrier, whether they plan to act on it or not. As soon as we unplug the unit and plug it into our UPS, the problem(s) extend to us.” Scenarios possible and bizarre were offered: “what if the UPS fails?” “What if the UPS damages the switch?” “What if the switch fails to power back on when we plug it into the UPS?” No, we weren’t heading down that road, unless everyone agreed to indemnify everyone else.

I’m not sure if this is the case for you, but for most employees, indemnification is the third rail of business contracts. Indemnification takes otherwise logical arguments away, and substitutes an indefensible hit to your company’s bottom line. I am not even allowed to sign a contract that includes an indemnification clause.

When did this happen? When did we become so afraid of the litigious spirit of our neighbors that we simply stopped cooperating? In CT, we have a Good Samaritan Law (CGS § 52-557b), that protects “certain” individuals while providing “some types” of emergency medical aid. A quick read of the 2,500 odd words making up the law and its caveats didn’t turn up any references to Uninterruptable Power Supplies or Internet connections. Do we really need to create a Good Samaritan law for problem solving? Do I have to worry about jump-starting a stranger’s car at the grocery store? What about the advice I gave local high school students at Career Day, is that going to haunt me when they don’t get into the college of their choice or they don’t get the job they want? What if my neighbor needed his mailbox replaced?

I wonder if all the businesses that send their managers and wanna-be managers to problem solving seminars tell them “…but always check with legal before actually solving any problems.” I guess they don’t have to; five people, from five different companies, representing a broad cross-section of skills and responsibilities; all knew not to solve the electrical problem described above. Even though we all agreed that the solution involved a device that one of us had and even though the device in question was made by a company (APC) who is arguably the best in the business. We were afraid (or made to feel afraid) of the potential cost of doing the wrong thing. Ironically, nobody – none of us and none of the lawyers – was interested in considering the very real cost of doing nothing.