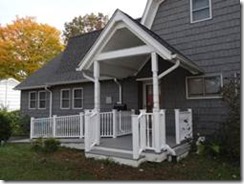 For the past two weeks, I’ve been installing a railing system on the front porch and my work, and the pictures I’ve been sharing have rekindled the questions about the ramp. “Why did you build a ramp?” “Did something happen to one of you?” “Are you planning on needing a ramp soon?” Popular opinion seems to indicate that ramps are only built when necessary.

That seems crazy to me.

Even crazier, most people aren’t impressed by the “logic,” when I explain that we built the ramp so that if we ever do need one, it’s here and it looks good. Apparently, a lot of people think the ramp says something about our house – “ramp people live here” or something sinister. This sentiment is supported by the number of people who ask “are you going to plant some shrubs in front to hide it?” I guess I screwed that up by installing the railing. Either that or we will have to plant some very tall shrubs.

There rationale for the ramp begins with the roof over the front entryway – it’s too close to the street. It would have to be, since our house is too close to the street. Our house was built before the town established a ‘setback’ requirement and they didn’t bother to check with us. Actually, the setback was established before we bought this house as it was revealed to us during the mortgage application process.

“Well, the house is too close to the street, so if it ever burned, you would probably have to dig a new foundation in order to rebuild. We (the bank) are approving the loan, because there’s enough room on the lot to move the house back.”

Of course, the insurance company doesn’t like the idea of having to pay for a new foundation. In practice, only one of these houses has burned that I’m aware of, and the town let them rebuild on the existing foundation.

Anyway, back to that roof. We wanted the roof because the house faces north and we get those pesky Nor’easters that pummel the house with rain and drift up huge amounts of snow at our front door. When I added the roof, I included plans for the porch and ramp. The Building Inspector said that he liked the plan because I was bringing the entryway “up-to-code.” He was referring to the part of the Building code that requires at least 42” at the same level in front of a door (like our storm door) that opens out. That way, there is no danger of falling as you open the door and step backwards off a landing. He also liked the ramp, but he’s a Building Inspector and he’s all about access and egress and stuff like that.

The main reason we wanted the ramp stems from the fact that during our marriage, my wife and I have both been on crutches for six weeks while our respective broken feet mended. We remember how hard it was to get up the stupid little steps at our doors. In other words, we knew that you don’t have to be in a wheelchair to benefit from having a ramp. In fact, in the year that it’s been there, I have liked having a ramp on a few occasions when my knees hurt and friends and family members have liked having the ramp to use. Of course, if we ever ended up needing a ramp, someone or some organization would build one, or we could rent one (yes, you can rent ADA compliant ramps) but we wanted something that would look good. We didn’t know about the whole “hide that ramp from view thing.”

The weird thing about the people who question the ramp is that they don’t question the stairs (steps) at the front and side of the porch. The steps go nowhere, no sidewalk in front and nowhere to go off the side, yet nobody has asked:

“Why do you have a big step when a) you don’t have a sidewalk and b) there’s a tree stump right in front of it?”

That would seem to be a good question.

In case you’re curious, the front step is for the UPS and FedEx men and women who ignore the lack of sidewalk and the stump and walk straight to the door from the street. The side step is for our regular mailman who walks from house to house through the lawns and bushes. Besides, if you read this blog on the website or if you’ve been to the Facebook page, you’ve seen the cover photos and you know that I’m comfortable with meaningless stairs.

Maybe the ramp implies age. Maybe having one of your friends or neighbors adding a ramp to their house reminds you that you too are getting older. Maybe we are frightened or worried about the day when we will need a ramp. I’d rather remember how much fun ramps were when we were kids. In fact, my daughter loved ramps. When she would go with me to Wickes Lumber, I could wander the entire store comfortable in the fact that she was playing on the ramp leading up to Plumbing and Electrical. If you are uncomfortable with ramps, watch the episode of The Twilight Zone “Kick the Can.” I checked to see if Paul over at Shadow & Substance had written about that. He’s mentioned it a few times but no definitive post (hint, hint Paul). I like this ramp, it’s a very comfortable way to enter our house. Maybe having the ramp to enjoy will keep me from ever needing it.