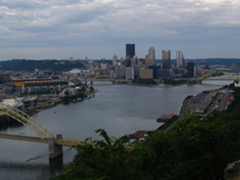 A blogger friend of mine recently wrote an article reflecting on A Sense of Place. I commented that despite having moved away from Pittsburgh, PA after college and having lived on both coasts between then and now, I still feel like I am part of my childhood community. In a response to that comment my friend said she was curious as to what helps me feel part of that distant community. It would have been easy to simply say “The Steelers…” but instead I told her that “it will take a blog post to answer.” In fact, it may take more than one. In fact, in many ways, it is the ongoing subject of this blog.

I thought this was “Random thoughts, life lessons, hopes and dreams” I mean that’s what it says at the top…

It is all those things, but many of those thoughts, lessons, hopes and dreams were established in Pittsburgh and not just in the sense that “it’s where I was born and raised.” The growing up, learning about life, becoming mature (we’ll see if my editor leaves that one in) and developing goals that set the foundation for my life are rooted in western Pennsylvania.

I was born outside of the industrial version of Pittsburgh. I matured, as it were, in a area on the skids. I graduated from a school in a region so racked with unemployment that I had no interviews with companies located in Pittsburgh.

I learned how to work in Pittsburgh. Of course most of those lessons came from my dad, but I can’t separate him from the city. Carpentry, auto repair, yard work and the basic work ethic that requires a job well done and a “good day’s work for a good day’s pay” (always in that order) were all taught to me by my dad or by his friends and relatives that he would lend me to for a day. His parting instructions, always: “eyes and ears open, mouth shut.” In addition to valuable skills, I learned the value of work and the value of learning. That is where / when I formed the “we can build that” attitude that I passed onto my daughter.

Pittsburgh is a city that built itself. We grew up

surrounded by bridges made with our own steel. We tunneled through mountains, crossed rivers, built inclines to traverse the hillsides and, by the time I came along, we learned to drive on roads that many cities simply wouldn’t have bothered to build. Trust me, if you learned to drive in Pittsburgh, you can drive anywhere.

When I applied to graduate school at The University of Pittsburgh, they were working hard to shake the dirty steel town image. A poster they gave me bragged about the 15 Fortune 500 companies that called Pittsburgh home, a world class symphony orchestra, amazing museums and places carrying out world renowned research. I lived there. I knew all that but I also knew that hard work still ruled the day and nights were still ending with a shot and a beer. The poster was cool, but it didn’t matter. I needed to remake myself as much as the city did; I was a chemist searching for a career in computer technology. I needed to be resilient and that was a Pittsburgh trademark.

Pitt and Pittsburgh were a good fit for me. I needed to be reminded that the first rule of dealing with bad times is to prepare for the good times yet to come. We’ll get ‘em next year. That’s the spirit. 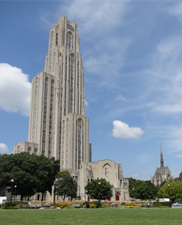 focusing on healthcare and building on the strengths of the city. Remaking me meant turning what had always been an underlying skill into a mainstream ambition. I had always loved problem solving, puzzles and building. I had never heard of the field of Operations Research, but it fit me well. Pitt gave me a chance to explore writing too. I had wanted to write since I was in 5th grade, but I never saw an opportunity. I was offered a chance to write a periodic Op-Ed page for the Pitt News. I had a byline. It felt good.

Most of what I learned before

leaving Pittsburgh, I could have learned anywhere, but there was something special about learning it in the Cathedral of Learning. Since I was a commuting student, I split my free time between the carrels ringing the 2nd and 3rd floor of the large Gothic commons room, the Carnegie Museum of Natural History and the Original Hot Dog Shop. I have a family connection to the Cathedral too; my mother’s grandfather was a construction foreman during the 1920’s when it was being built.

Throughout my career, I have used the concepts and techniques I learned at Pitt and I have benefited from the work ethic that was instilled in me during my childhood. I am happy to have been able to retain the resilient nature I absorbed growing up in that remarkable region. It didn’t hurt that on my way out the door, the Steelers had racked up a couple Super Bowl wins, the Pirates were playing championship ball and Pitt had just won its first ever national football championship.

friend, it’s not so simple. Pittsburgh sports teams have known great dominance as well as long periods of poor performance – both are taken in stride. The people from Pittsburgh are better at accepting the good, the bad and everything in between than the people of any other region in which I’ve lived.

44 thoughts on “I Am Pittsburgh”