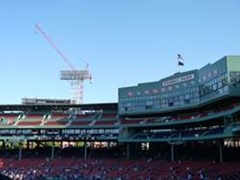 I don’t have a bucket list. There isn’t a group of things that I feel that I have to accomplish, see, or do before time and nature prevent me from accomplishing, seeing or doing them. I plan to just take advantage of the opportunities that become available. One of the opportunities that came my way recently was a chance to see a ballgame in Fenway Park. OK, “opportunity” might be a bit of a understatement in this case. A friend of mine from ADNET Technologies called in March and said:

“What are you doing on May 31st? …Nothing, OK good. We’re sponsoring a bus trip to Fenway and you’re going. Add it to your calendar.”

The Red Sox were playing the Rays (my friend is a Rays fan). I don’t actually care about either team. Despite our friendship, I wanted to see the Red Sox win. While it might have been cool to see him celebrating in the opponent’s ballpark (not to mention on the bus ride home), I wanted to see the Boston fans at their best. If you’re going to experience Fenway for the first time, do it on a night Boston is going to win.

The trip was one of the easiest things I’ve ever done. Get on the bus. Watch a movie. Eat. Watch a game. Get on the bus. Watch a movie. Go home. The event was very well organized – nothing was left to chance. Lists, tickets, times and directions were checked and disbursed. Noses were counted. Commands were given, and the DVDs that had been packed for the ride were perfect. Keep in mind; this was primarily a group of geeks and computer nerds. On the way up to Boston, we watched Office Space and on the way home we watched the Blues Brothers. Watched is another understatement, we participated in both movies. Almost everyone on the bus knew almost all of the dialog and lyrics. I don’t know how they arranged it, but the last of the Blues Brothers credits (very important part of that film) scrolled up as the bus entered the parking lot back in CT.

Fenway did not disappoint. Within seconds of walking through the gate, I felt like I was a child back at Forbes Field. The structure, the smell (yes, you can smell baseball history) the view, the closeness and the simplicity of the ballpark were comforting. No escalators, no big glass areas, no homage paid to modern marketing – this place was built for baseball. The view was probably the thing that most caught my attention. It’s not a view of Boston, it’s a view of the ball field. That’s why you’re in Fenway, to watch baseball.

The Red Sox didn’t disappoint either. They gave over 37,000 loyal home town fans and one fan-for-a-day a few special treats. We got to see two home runs and we got to see Rubby De La Rosa pitch his first game for the team. I think the Rays would have rather he had started a few days later; he kept them scoreless through 7 innings. We got to see a successful wave. I was impressed by the fact that the fans carried it through the Green Monster seats, I guess they know what they’re doing.

The viewing experience, like the stadium ballpark (my friend gets credit for noticing that distinction) is old school. Our seats were pretty far up in the right grandstand so high fly balls were blocked by the deck above us and pretty much every play was interrupted for a millisecond while the ball/runner/fielder was obscured by a steel beam. There are small video monitors attached to those beams, but watching them turned Fenway into a cold living room. It was fun to watch some replays but not the one of Jackie Bradley Jr. slamming into the Green Monster and then getting hit in the face with the rebounding ball. The video was scary to watch. The live action was worse because we could hear the thud

when he hit the wall.

Fenway was loud. According to my iPhone app, a home run set the max for the night at 101 decibels up under the deck (some sites label that the threshold of pain, putting it equivalent to a train whistle up close), Big Papi coming to bat registered 93 and booing what seemed like a bad call at 2nd base hit 89.

Now to answer the two questions some friends have. I don’t think that I will go back to Fenway to watch the Red Sox play unless it is another group event or if I happen to be in Boston. With the novelty gone, it’s hard to justify the four hour round-trip and additional hour or more in traffic, especially since I’m not a fan. As for which ballpark is better, Fenway or PNC Park, I’m going to say PNC Park. Keeping my friend’s distinction in mind, the Pirates built a new ballpark, not a stadium. PNC Park has the old-time feel of an early 20th century ballpark as well as slightly larger and more comfortable seats. 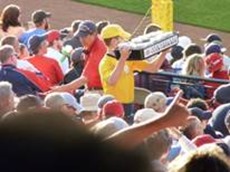 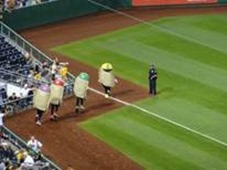