Back in May I wrote about purchasing a new band saw for my shop. The primary reason for selecting this particular saw was its resaw capacity. Resawing, in case you don’t want to revisit that post, is the process of slicing a board into two or more thinner boards. Resawing lets you make your own thin boards. It lets you make multiple thin boards out of one thick board and, if the one board is interesting, it lets you make panels that mirror each other.

I have almost always built a box to test a new tool, a new jig or a new technique. Boxes are the perfect choice because: 1) they don’t require a lot of thought. 2) They can be made in any size or shape and 3) my wife and daughter love boxes! I learned this the hard way.

When I bought my first dovetail jig, I made a box. I mean, that is what you do with dovetails; you use them to join together the sides of boxes. I pulled a few pieces of plywood out of the scrap bin and I made a box. The wood was the same species, but the sides weren’t the same width. I didn’t care, it was a test, an exercise and an example…until it became a gift. I brought it home to show my wife and she put stuff in it.

Ever since that day, I build my test boxes with care. When I built a jig to help me cut box joints in the Green and Green style, my daughter scooped it up before my wife had a chance. I felt like I should make another one. The day I bought a much better

dovetail jig, I made a box in the shape of a bed. I thought our cats might like it. One did, for a while but he stopped using it. We still have the box. My wife uses it to hold all the cat toys. If you build a box around here, count on it being here forever.

This time, the box needed to feature boards that were resawn. I decided to build a tote. I picked a tote because it would let me use

three boards cut from the same board, two for the sides and one for a divider / handle. I selected a piece of Ambrosia Maple because it’s highly figured and I happened to have a fairly thick piece lying around. I cut a nicely figured portion out of the board and I used the new saw to slice that into three pieces.

These thin boards looked good but that they presented a few challenges. The first challenge came when I assembled the basic box. I decided to use box joints because the wood was too thin to machine any other joints into. Box joints, like mitered corners need clamp pressure in both directions. I normally use a band clamp for these types of joints, but I couldn’t do that for two reasons. First, a lot of glue squeezes out of a box joint, and the band would smush that around. Second, since the sides and the ends of my box weren’t the same thickness, the pins were long. I wanted to wait and sand them flush after assembly. Then, I discovered a third problem – the wood was so thin that the clamps bent the sides in. I had to clamp some support brackets on the inside to keep the box square against the pressure. If you ever need a gift idea for a woodworker, buy him or her clamps. You can never have too many clamps. 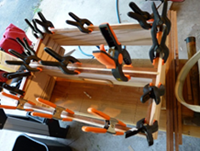 The next thin-board challenge came as I started fashioning the center divider for the tote. The idea was to leave that board a little taller than the sides and cut a hole in to serve as a handle. That would have looked nice, but it would have been way too fragile. It had to be reinforced. Also, the connection of that divider to the ends of the box had to be reinforced. I resawed a couple of thin slices of mahogany to augment the handle hole and to make reinforcing posts for all 8 corners. After that, I turned my attention to the bottom; once again, I was set back by the whole thin board thing. Fortunately, I had enough mahogany to slice up some support cleats.

Once I had a support system for the bottom, it was time to resaw a few more boards. I took a second scrap of Ambrosia Maple and sliced off a series of strips that I could make into shiplap flooring. The complete tote is made from two maple boards and one mahogany board. The long sides display the effect of matching up the grain nicely. 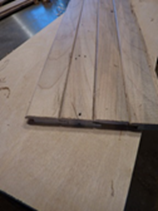 This project was fun. I learned a lot about the operation of my new saw and I was able to build an interesting wooden tote. My wife is planning to use it for all her dog grooming tools and accessories so it should have a long and useful life.