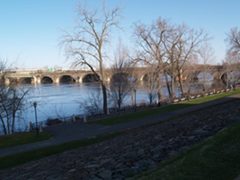 On most days I travel through 5 or 6 towns on my way to work. New England is like that; a collection of tiny, congested, parochial little towns with identities confined within boarders that fly by, one after the other. By contrast to my 17 mile journey, the 35 mile trip from Des Moines, Iowa to Ames, Iowa (where my brother lives) appears to take you through precisely one town. As I cross the Bulkeley Bridge, I move seamlessly from Hartford to East Hartford. The best part of my commute is the fact that I am usually traveling against the flow of rush-hour traffic. That wasn’t the case today. Joe Biden came to East Hartford today.

For the benefit of my readers in other countries, Joe Biden is our Vice President and we don’t see him very often. Nobody has ever characterized the office of Vice President as well as Tom Lehrer did on his satirical album “That Was the Year That Was” 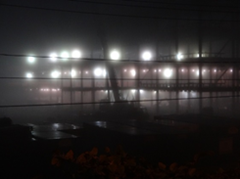 back in the mid-60’s. The song “Whatever Became of Hubert” (only 1:32 if you care to give a listen) highlighted the fact that the VP spends most of his or (maybe someday) her time in the shadow of the big man or (maybe someday) woman. But today Joe Biden visited Goodwin College to attend a “roundtable discussion” on Workforce Development and Skills Training. CT Gov. Dannel Malloy (not a typo, his name is Dannel) also attended.

For all intents and purposes, Joe could have been attending a roundtable discussion on congestion on undersized highways, like Rt-2, the road that Joe traveled en-route to Goodwin College. He wasn’t there for the discussion, Dannel is running for re-election. Congestion wasn’t a problem for Joe and Dannel because Rt-2 was probably closed for the Vice Presidential motorcade.

I’m not sure when they started closing major highways to insure the safe passage of visiting top brass politicians, but I recall being stuck behind President Clinton from Hartford to the airport (BDL). Since I practically live at BDL, I was following his parade for 90% of my commute.

According to the news reports, the roundtable:

Did you notice “State and Federal Government” in that partnership? No, I didn’t either but it was a chance for Dannel to have his picture taken with Joe – the Governor of the third-smallest state and the least valuable politician who is capable of closing a highway. This is why I don’t have to remove my socks to count the impressive political moments I’ve experienced.

Ironically, the most impressive act by a politician that I ever witnessed, involved none other than Hubert Humphrey. Hubert wasn’t VP at the time, he was back in the Senate. Hubert was visiting Pittsburgh to stump for John E. Connelly who was running for the US House of Representatives seat that was left empty when Robert Corbett died. John Connelly also happened to own the Gateway Clipper Fleet, where I worked. Technically, I worked for a catering company that supplied the Gateway Clipper fleet with food for the shipboard events.

For the nightly Captain’s Dinner Cruise, we served 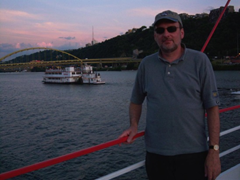 Roast Beef, Ham, Rigatoni and Au Gratin Potatoes. In addition to driving the food from the catering kitchen to the dock, I scooped out the pasta and potatoes. For John Connelly’s fund-raiser, we served franks and beans. I say “we” but professional waiters had been hired to dish out the weenies and beans to the people who had paid hundreds of dollars for the privilege. I, along with the kitchen staff and deck hands, had been instructed to remain in the kitchen or on the tug (the boat that pushed the Party Liner on its nightly journey).

After dinner and the speeches, Hubert Humphrey started walking toward the back of the boat. John Connelly’s eagle-eyed entourage intercepted him as he got within a few yards of the kitchen. Not close enough for us to see, but close enough to hear:

“I know where I am going”

“No, sir, that’s the entrance to the kitchen”

“I know that. If I’m going to be shaking hands, I’m going to start by shaking the hands of the men and women who made this night possible. You should remember that!”

They had gotten close enough to see that that last line was directed at John Connelly.

As Hubert Humphrey walked through the kitchen, he shook our hands and he said something to each one of us. As he shook my hand, he said:

“I work for the company that prepares the food.”

How I wished we hadn’t served hot dogs and beans.

John Connelly lost the election to John Heinz, the man whose family’s business probably made the franks and beans that we served that night. John Connelly wasn’t much of a politician, but he was a visionary businessman. He is credited with starting a movement to recapture the energy of the waterfront in Pittsburgh. That movement spread to many other fading industrial cities, including Hartford where Goodwin College is part of an effort to recapture the waterfront in the region.