About a week ago, I had the opportunity to watch a local fire department as they conducted a drill of rescue techniques. The invitation came as a result of my daughter having donated her car to be one of the subject vehicles. The car had also once been my wife’s ride, so it had served our family well but I think this may have been its finest hour.

Drills are conducted around a scenario; a particular set of circumstances conjured up to exercise specific techniques. The scenario last Tuesday:

“A woman had been texting while driving and rear-ended a 15-passenger van carrying school children. Both vehicles collided with the guard rail, which broke free and then bent up and over the car, and a small tree which collapsed on the van.”

I felt bad for my daughter when the person running the drill explained the scenario to the crew. She had been introduced as the prior owner of the car, and when the guy said that “the woman had been texting…” everybody looked at Faith. Faith assured the crowd that she does NOT text while driving, wasn’t driving this car and didn’t cause this accident. Humorous comments followed nonetheless.

The evening was full of interesting observations, learning experiences and photo-ops. The equipment that they were using was very impressive and if the circumstances were different, I might have been jealous. OK, I was jealous. They brought out a pair of hydraulic shears and cut the door hinges off! How could you not be jealous of equipment like that? But, for most of the evening my jealousy was suppressed by the serious nature of what was going on and what it represented.

One of the senior firemen who was observing from a distance explained some of what was happening to Faith and me. One thing that struck me was when he said:

“We try to make these scenes as realistic as possible but we really can’t replicate the kind of damage that you see in a real accident.”

The car and the van had been pushed together with a pay loader. They had been beaten with sledge hammers, the doors had been pinched and then welded shut and the roof of the car had been crushed with the bucket of the pay loader. This was the kind of damage that can’t compare to a real accident! 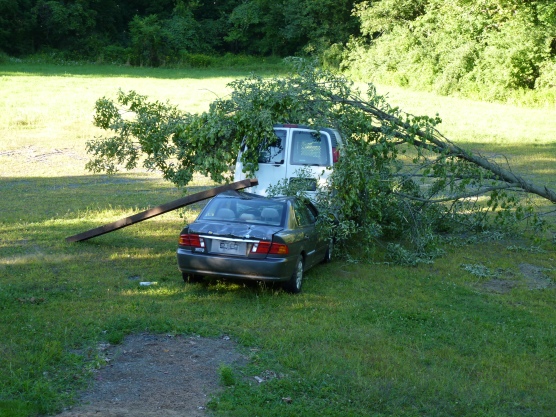 The senario is staged

Used to be her car 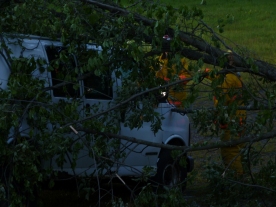 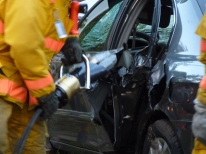 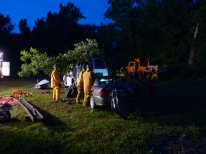 To keep the drill interesting, as the scenario played out, they “discovered” that the passenger’s foot was trapped under the brake pedal of the car. That fact necessitated tearing off the roof and “rolling” the dash assembly up. I put rolling in quotes because that’s a portion of your car that isn’t actually designed to roll.

In the face of an emergency situation, people don’t always stop to think about all the little things they should do. People, myself included, sometimes just want to act. I won’t give you a play-by-play, but I will share some of the things that these guys did in seemingly routine fashion that I might not have considered:

They stabilized the van and the car with wood cribbing. They didn’t want either vehicle moving while they worked on them. Such movement could further injure the people trapped inside and /or injure the rescuers.

They made-ready a fire hose. If something happened and a fire started, they wanted to be able to act fast to extinguish it.

They lopped some branches off of the tree and stabilized the steel I-beam representing the guard rail. They did this to create a safe work area and rescue path.

They worked safely. From the gear that they wore (which must have been hot) to the lights and the rigging, they did their best to make sure that nobody was injured during the rescue operations.

This was a learning experience. These men need to be able to work in that protective gear, with those gloves on, in the dark, in the cold, in the rain and when things go from bad to worse. This is how they prepare for real life, when a real person who is texting does rear-end a van carrying school children because stuff like that happens.

I have to admit, as I looked at the scene of this make-believe accident, it was hard not to imagine my daughter being trapped in that car. No, she wouldn’t have been texting, she made that fact abundantly clear during the drill. But, accidents do happen and I am very grateful to the men and women everywhere who volunteer their time to plan and practice for and respond to fires, accidents and natural disasters. Those men and women all have families. They all have other things to do with their time, but they freely give that time to be better prepared to help the rest of us. So, out of respect for those volunteers, here are three bits of advice:

1) Do NOT text and drive. Not even for a little bit.