A few weeks ago John Howell (one of my favs) wrote one of his “10 things not to do” posts on the subject of grocery shopping. Having violated several of those rules, I dredged up my notes on grocery shopping. I love it when other people decide what I should write about.

Up until the time I was about 10 years old, we lived amongst a handful of neighborhood markets. There was Jule’s, B&I, Gloria’s and Baldini’s. Jule’s was my favorite, because they had a very large candy display that was as easy to navigate as it was enticing. Penny candy was on the top shelf. Below that were two shelves of candy that sold for a nickel a piece and below that were the premium items – the Nestles, Hershey and other candy bars that were a dime each. My mother would often give into my “can I borrow a dime” pleas, so I could buy 10 pieces of penny candy. I preferred that to a single Mounds Bar.

Sometimes I went to Jules just for candy or a Popsicle but sometimes I was running an errand for my parents. “Run up to Jule’s and get a pound of chipped ham and a pack of Pall Malls” or “Go down to B&I (brothers Bernie and Izzy) and tell Bernie I want four nice pork chops, and a pack of Pall Malls.” Mom and Dad knew which store had the best meat, which had the products they liked, which were running sales and whose bread was likely to be fresh. They all had Pall Malls. We had supermarkets back then, Giant Eagle and A&P, but the corner market filled an important void, especially the ones with a good butcher.

Convenience took over my life when I arrived in Morgantown, WV for college. I lived on a hill above campus, and at the base of the hill was a Thorofare Market – yes, that’s how they spelled it. For most of my first year in that apartment I didn’t have a car, so I bought everything from the Thorofare. Did Thorofare have good meat? The right brands? Good prices? It didn’t matter, I wasn’t going anywhere else. I did my laundry at a grimy place in the next block. When you have to walk, your options are limited.

I let proximity guide my grocery store selection for as long as I was buying food. I was a pretty good cook, but a lousy shopper. I bought dinner on the way home from work; a clear violation of John’s rule – no shopping while hungry.

Fortunately, I stopped shopping for food about 32 years ago when I got married. Not only could my wife cook way better than me, she knew how to shop and she shopped for ingredients, not dinner. She could probably feed our family of three for a week on the amount of money I would spend in three days, two if I was hungry.

I say “fortunately” because 32 years ago supermarkets weren’t all that super. They sold groceries, but they didn’t fill prescriptions and process mortgage applications. You might pick up a bunch of cut flowers, but you went to a florist when you wanted something nice.

The other not-so-super thing about markets 32 years ago was that they were smaller because there were fewer things for sale. Oh, they sold the same stuff, but there were fewer choices – way – fewer – choices. I won’t go too deep into this subject, but if I were 10 today and my dad sent me to the store for “Triscuits” I’d never get it right. I’m 60 and I wouldn’t get it right if my wife sent me for Triscuits today. ‘Cuz there’s eight million kinds of Triscuits! And soup, and bread and English muffins – seriously, there’s an English – Muffin – Section in our grocery store! I probably couldn’t even get the right Pall Malls today.

Extra protein English Muffins? What has this world come to? 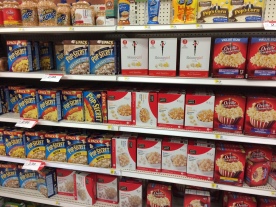 I blame Orville Redenbacher. Before him there was some store brand of popcorn and Jiffy-Pop.

If you haven’t been shopping lately, you might think I was exaggerating.

My wife shops at the smallest market around here but her favorite small supermarket went out of business about 10 years ago. Chester’s was as close as it came to B&I and Jule’s in Connecticut.

I did the grocery shopping once when my wife was on crutches and in a cast with a broken foot. I went to Chester’s, with a list and I still screwed up. I bought two tubs of ketchup because they were on sale “2 for $3” – the Mrs. explained that “they are always two for $3.” I was turned away from the checkout because:

“That’s not the brand of soup your wife buys.”

“But, this is way cheaper.”

The butcher was the best:

“What are you looking for?”

“My wife wanted pork chops but I don’t see any.”

“Don’t worry, I’ll cut some nice ones for her. How’s she doing with that foot?”

If I were shopping for myself these days, I’d be a prime target for the new trends in supermarkets. I’d either be shopping in the “Man Aisle” or I’d be buying nothing but prepared food.

The man aisle is actually a pretty good idea: put the chips, dips, salsa and barbeque sauce right next to the beer. Toss in a few brands of toothpaste and a razor or two and we’re good to go. The prepared food might be a problem though. Ever since Brad Lewis shared this article, I’d rather avoid buying the food that is about to spoil prepared food. It makes sense for the store, “cook and sell a chicken today or throw it out tomorrow” easy-peasy decision there.

This weekend is Memorial Day. I’ll be at the grill for at least one fine meal. I wonder what my wife is going to buy.