As I was researching the story behind today’s doors, I discovered more about the common thread between my adopted city and my home town. So, in addition to doors, today I am writing about the special relationship a city has with its river.

Although it’s always tempting for me to write about Pittsburgh, today I am writing about Connecticut’s capitol city, Hartford. The common thread? I had the privilege of living in both cities when they began to recapture their riverfront. In Pittsburgh, I know, I’m not writing about Pittsburgh, they had the idea to turn three struggling polluted industrial lifelines into a major tourist attraction well ahead of the national trend.

They began their riverfront recapture program in the mid-to-late 50s. John Connelly had the assignment to begin that process. Luckily, he also had the vision for a way to begin, by putting people on the river(s) for sightseeing and dining. Mr. Connelly founded the Gateway Clipper fleet. I worked on his boats for a while and I’ve been on them as a tourist when I’ve traveled back to see Pittsburgh’s thriving waterfront 60 years later.

About the time that Pittsburgh was trying to clean and rediscover its rivers, Hartford was busy building a permanent barrier between the Connecticut River and the city. Interstate 91, as it was originally constructed, ran atop a flood control dike that was protecting the city.

The highway would prevent people from accessing the river for about 40 years. Hartford began its own Riverfront Recapture project in the 1980s, but it wasn’t until 1999 that the City of Hartford was reunited with the beautiful Connecticut River.

Hartford’s recapture plan required lowering I-91 to grade level and building an elevated plaza over the highway to provide pedestrian access to the river for sightseeing cruises and concerts. Also, a series of walkways along the riverbank and across a couple of bridges would link the plaza to three different parks. It’s been over 30 years, but the work is almost done and the results are good. These days, over a million people are visiting the Hartford area waterfront each year.

You can read about all of the attractions in the descriptions of the photos. Riverside Park, the park with the boathouse whose doors are featured here today, is on the north end of the City of Hartford. The park provides access to the river via a public boat launch, as well as playgrounds, sport fields and picnic areas. The boathouse is the base of a significant community rowing program and the upper floor can be rented for social events. The lower floor houses about 65 rowing sculls and was designed to withstand the annual flooding that puts most of Riverside Park underwater during the spring. 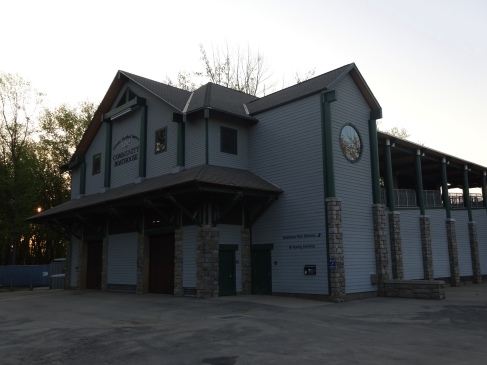 As you pull into the main parking lot to Riverside Park, you are facing the rear of the Boathouse but it’s a beautiful sight.

From Charter Oak Landing, you can climb these stairs and then cross the bridge to Great River Park.

The Park River used to run through Hartford’s Bushnell Park. It was buried in the 1930s to help control flooding. This is where it returns to the surface as it joins the CT River.

The riverfront plaza as seen from Great River Park in East Hartford. 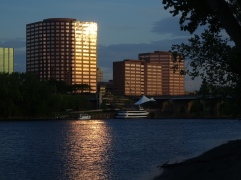 You can see the west end of the Founders Bridge as it carries cars into Hartford and pedestrians onto Mortensen Plaza.

From the Connecticut Convention Center looking out over Mortensen Plaza. the closest bridge is the Founders with a walkway to Great River Park. The distant bridge is the Bulkeley Bridge. 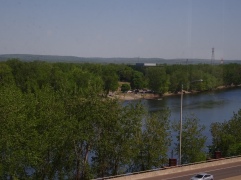 From the Connecticut Convention Center in Hartford, a look down onto the parking lot of Great River Park in East Hartford 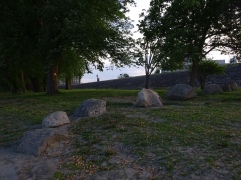 Looking up from Great River Park, you can see the flood control dike in East Hartford. 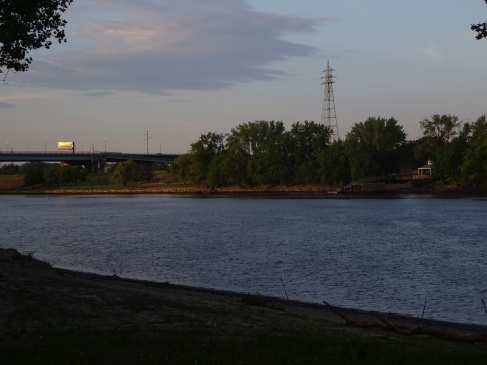 From Great River Park, you can look across to Charter Oak Landing. 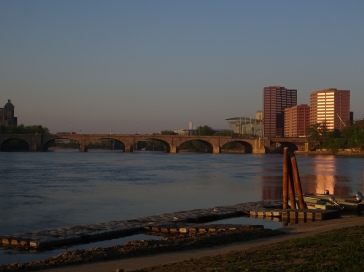 One of the oldest bridges in the US Interstate system and the longest stone arch bridge in the world. You can walk across the bridge from Great River Park but you can’t access the walkway on the Hartford side.

This is the front of the Boathouse. The lower floor is for boat storage. The upper floor can be rented out for events.

The rivers that had appeared to have outlived their usefulness to the cities that were built nearby, are once again playing an important economic role. Abused for centuries, we have finally reached a point where we appreciate the natural beauty of these magnificent waterways. It was a long time coming in Pittsburgh. The rivers that powered the industrial age in my hometown are now urban playgrounds. For longer still, Hartford had hidden it’s river from sight but has now welcomed it back into the landscape and the economy. Great River Park, where I begin many work days is apply named.

This post is part of Norm Frampton’s Thursday Doors series. It’s easy to participate, you really only need one picture of one door. See the link for more information.