I never thought that I’d have to preface a post with a disclaimer regarding how it’s not a post about gender identity. It’s not. The expression in the title is what my father used to tell me as he dealt with my injury du jour. He would look at my skinned knee, brush the bits of dirt out of the bloody scratches and say “you’ll be a man before your mother.” I won’t tell you how old I was before I realized the relative certainty of that statement. I like to think that I wasn’t “slow on the uptake” but rather that his words had the desired effect.

I always felt better after he said that.

My dad wasn’t one to mince words and he wasn’t one to shy away from a colorful expression when an ordinary expression would do just as well. I’m sure that if he thought I was about to bleed to death, he would have said: “we need to get your dumb ass to a hospital right now.” As it was, the times that my injuries required medical attention, my mother was on-duty.

Back in the late 50s and early 60s, there was no 911 to call. You could call the police, or an ambulance service, but mostly, you tossed your kid in the back of your car with a towel to keep the blood off the seat. “Try not to get blood on the seat” added for good measure. If things were really bad, you might ask a neighbor to ride along.

It’s interesting, but when I was taken to the hospital, a neighbor was usually in the car holding me, but my mother drove. I suspect that there was a greater sense of being in control when she was behind the wheel, instead of sitting there wondering why the neighbor stopped at the red light while her son was bleeding to death.

When I was about four years old, I fell down a set of steps and smashed my face into a stone wall. Nothing short of the Hand of God directed my face during that fall. I smacked into a stone with a V-shaped edge and I cut my face above and below my left eye. Stiches were required on both wounds. My mother grabbed a neighbor, a towel and off to the hospital we went. When my father came home, he was calm around me. He assured me that I would be fine, dispensed his signature comforting statement and then he took a sledge hammer and destroyed that wall.

Most of my cuts and bruises were less dramatic. In the little town near Pittsburgh where I was born, lots of things were “paved” with an evil substance called “Red Dog.” Red Dog was a byproduct of coal mining and was readily available on the cheap in the 50s and 60s to anybody that needed a few tons. Red Dog was used like gravel but since it was larger, flatter and had sharp edges, it acted more like glass. When you fell on/into Red Dog, you learned the meaning of laceration. 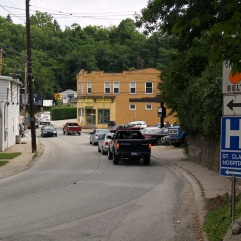 This sign is across the street from the house where we lived until I was about 10. The church is near the end of the street.

That was the (Red Dog) parking lot where we played ball. Charties creek is just beyond that car in the back.

We played Wiffle Ball in a Red Dog parking lot behind a bar a few doors down from our apartment. We rode bikes to a nearby park, the long parking lot of which was also “paved” with Red Dog. Sliding into base, falling off my bike and/or just running and falling because – clumsy, frequently ended with me sitting on the side of the tub while my father cleaned my non-life-threatening wound. Next came the application of Mercurochrome, followed by a clasp of my shoulder and the comforting “don’t worry, you’ll be a man before your mother.” All of that care mercifully rendered despite the fact that I had been told not to play in that parking lot and not to ride my bike through loose Red Dog.

In 1972, I asked my parents if I could go on a school sponsored ski trip. Knowing that 1) I had never skied, and 2) I was better suited to the role of spectator than athlete, my parents said no. I forged my mom’s name on the permission slip, lied about my plans for that evening, went skiing and broke my leg. On the way home, the school bus broke down at 2:00 am. They took me by ambulance to Homestead Hospital, on the other side of Pittsburgh and they called my parents.

My father came the following morning to collect me. I was in a cast up to my hip. For six weeks, he helped me undress, wrapped my leg in a bag, lifted me into the shower, lifted me back out and helped me dress, all before leaving for work at 5:45 am. He never once mentioned my deception.

Many years later, he confessed that he wanted to leave me in the hospital to rot. He was very angry, but he said that his anger dissipated the second he saw how pathetic I looked. He hoped that my having to receive his help would serve as a lesson. It did. In fact, I learned many lessons from watching his loving service to his family.

He’s been gone over 30 years, but he was right. Somewhere along the line, I became a man and I became a better man thanks to his example.

70 thoughts on “You’ll Be a Man Before Your Mother”