Last week, I featured a collection of decaying properties. Today I’m featuring doors and photos of a historic building in my town that barely escaped being torn down. The building survived, along with the legacy of one of the founding families in Connecticut, but a once proud company was dismantled by something far more destructive than fungus and termites. Dexter Corporation succumbed to greed.

Dexter, in one form or another has been a fixture in Windsor Locks, CT since the 1820s. Seth Dexter operated a sawmill and a grist mill in the area of Windsor known as Pine Meadows. The mill passed onto Seth Dexter II and then onto Charles H. Dexter. In 1835, Charles Dexter began making paper from manila rope, working out of the basement of the grist mill. In 1840, Charles built a paper mill on the east side of the Windsor Locks Canal (on the island between the canal and the river). The historic portion of the complex shown at the right was built in 1876 after the original paper mill was destroyed by fire.

The company changed hands, within the Dexter and related Coffin families. Until 1991, a descendent of the Dexter family served as CEO of what was then, the oldest company listed on the New York Stock Exchange. By that time, Dexter, which had been the first company in the world to produce tissue and toilet paper, had become a world recognized producer of specialty paper products including teabag paper and surgical gowns. In the late-90s, Dexter Corporation survived a hostile takeover attempt by breaking itself into three units and selling each to similarly aligned international companies. In 2000, Dexter Corporation ceased to exist. The facilities in Windsor Locks were taken over by Ahlstrom and incorporated into their “non-wovens” division.

Ahlstrom agreed to the demands to retain the historic portions of the mill complex as they constructed a more modern building on the industrial island. The result is an inelegant melding of the 1800s and late 20th century industrial styles which appears to have been built with emphasis on economy over aesthetics. The historic portions of the plant are bracketed by the new mill and a natural gas co-generation plant near the southern end of the island.

The Town of Windsor Locks, itself incorporated in 1854, took its name from the canal that was dug in the 1820s primarily as a means of servicing the transportation demands of the Dexter operation. In the 1990s, Dexter entered into an agreement with the State of Connecticut to maintain the historic canal, in exchange for the right to use and control the water for cooling purposes at the co-generation plant, then under construction. Dexter also entered an agreement with the Town to provide power from the co-gen plant for emergency purposes to Town offices.

These last acts of corporate stewardship were in keeping with a long and wonderful history of supporting the Town of Windsor Locks and the State of CT. The Dexter Corporation and members of the Dexter family combined to donate time, money and land, including the land where the Windsor Locks Town Hall and original high school (now a middle school) are located as well as the land for the Windsor Locks Congregational Church. In the 1940s, Dexter D. Coffin leased over 250 acres of former tobacco fields in order to build what would become Bradley International Airport. In addition, many Dexter employees serve as volunteer firemen and donate time to charities throughout Windsor Locks and neighboring towns. 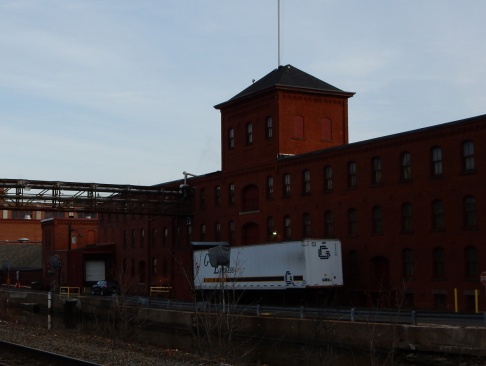 This is the original paper mill.

If you look through the stairs, you can see the CT River.

Well, they are doors, but the subject here is the thing with the cover. That’s an industrial bug-zapper. The canal is usually stagnant and attracts a lot of bugs.

That’s the Dexter-Coffin Bridge. It’s about 1/2 mile south of the mill complex.

Part of the original mill. Notice the decorative brick work. 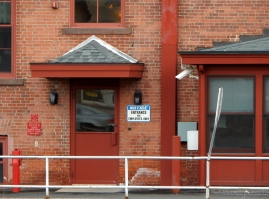 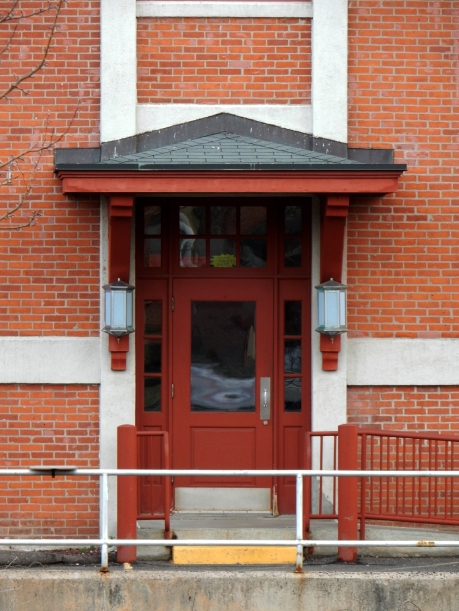 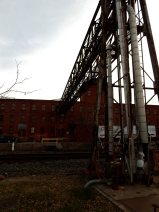 Carrying the utilities over the canal.

This is the original mill complex.

OK, the building is blocked by a train, but, well you know, I love trains.

The new mill is sided with metal, but it’s the colors of concrete and brick, so it kinda-sorta matches.

The red building behind the trees is the Canal Station

From the east side of the river, you get a feel for the size of the sprawling complex.

This was an early addition where concrete and brick were joined to the original all brick building.

The most recent addition is brick and concrete colored metal siding. At least they made an effort.

The Dexter Ahlstrom Non-Wovens complex isn’t the prettiest sight on the CT River, but its historic importance can hardly be exaggerated. If there is any doubt that the State recognizes the importance of this family, one only need look to the south to see the 8-lane Dexter-Coffin Bridge that carries Interstate 91 over the Connecticut River. The State of Connecticut and the Town of Windsor Locks owe much to Seth Dexter and his descendants.

This post is part of the fun and inspiring series supported by Norm Frampton called Thursday Doors. If you like doors, consider joining Norm and his friends on a weekly basis (actually any time before noon on Saturday) with a picture and/or a story of a door.