That’s the grown-up equivalent of “are we there yet?”

Last Friday, we had a snow storm in Connecticut. Actually, we had a forecast of 3-5” (for my overseas readers, “ stands for inches which would be 7.62 – 12.7 cm) of snow. That’s really not much snow for a New England state. I’m not sure I should use the S-word (storm). I don’t want to pull the old-guy card, but when I was a kid, they wouldn’t even had closed school for the possibility of 3-5” of snow, ending at 1:00 pm. My dad would have said:

“It will be over before you come home and you’ll have plenty of time to shovel the driveway before dinner.”

As for work, I grew up working for companies that would say: “we’ll close the office if the Governor closes the State.”

In 1982, we got a freak snow storm in early April. It started snowing hard in the afternoon. The managing partner of our office got on the intercom… (Before cell phones and text messages, we used to have speakers in the ceiling and people could say something to the whole office. Yes, I know, quaint). He got on the intercom and said:

“While we are letting employees leave early today, the smart thing to do would be to work late and wait out the storm.”

Six hours and 14” (35.56 cm) of snow later, he ended up springing for a bunch of hotel rooms and rumor had it that he replaced a few pairs of high heeled shoes. I threw caution to the wind and left right after his announcement. I was driving a Triumph Spitfire at the time, with four whole inches of ground clearance. I barely made it into the parking lot of my apartment building.

Although it’s a funny story in our house, (my wife worked for that same accounting firm), the decision to close the office, open the office late, let people work from home, crawl out of our holes and see our shadows or not, is never easy.

For reasons I won’t bore you with, the decision whether or not to close the office on Friday, was mine to make. I decided to ignore the weather and leave the “the office will be open during normal business hours today” message behind the voicemail/website/iPhone App versions of “Office Status.” I recorded that message, and I’m reasonably sure that it’s the sound that I make that frustrates more people than anything.

There once was a time when a melodious: “it’s a brand new day” frustrated my daughter enough to outweigh the combined frustration of 30 people who don’t want to drive in the snow, but those days are long gone. She now works for a company that closes when the Governor closes the State.

Personally, I like snow, and 3-5” is a great amount. It’s enough to justify firing up my snow blower, but is not enough to force me to run it at a low speed. When I think back on shoveling snow as a child, I feel guilty about owning this machine. My father didn’t buy snow shovels. He and my brother and I used coal shovels to move the snow around. Those things were heavier when empty than a snow shovel is filled with snow. By contrast, my snow blower is outfitted with a storm cab to keep the discharged snow from blowing back on me, track drive that goes through anything, a headlight in case I’m out early and a cup holder for my coffee.

My daughter drove to work on Friday. She has a short commute, but in Connecticut, any distance in the snow can be treacherous because…hmm, let’s see, how should I say this…Oh, right, people are idiots! Since we haven’t had much snow, most people in the state forgot how to drive in it. Some still want to go 65 mph, even though the traffic in front of them is going 20. Some want to go 15 mph even though the road ahead is merely wet. Some have cleared their entire car of snow, while others carved out tiny portholes in the snow on their windshield. Some quake with fear at the mere thought of driving in snow and others can’t wait to get out there. My daughter might be in that last group. That might be my fault.

When she was young, I owned a Dodge 4-wheel-drive pickup. It was large and red and it had large tires with aggressive tread. I could easily drive that truck through 12” of snow without worry. If we were lucky enough to get a lot of snow overnight on a weekend, we would get up early and go for a ride: “before the plows ruin it” as we were known to say. We would drive to a town park with a steep narrow driveway leading down to an unplowed parking lot in which we could do donuts (spin the truck wildly in circles – that’s for Sharukh, who lives in India). The park had a back way out through the woods which was perfect.

30 minutes after it stopped snowing, we had this to look at. 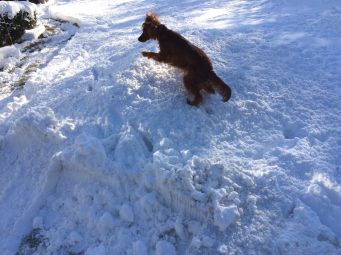 Maddie love the snow and she likes it when I make a pile for her. We call it Mt. Maddie. 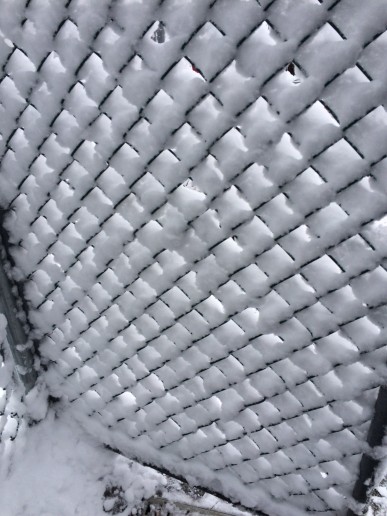 Sticky snow on the gate.

I’ve seen people driving with not much more than this cleared.

That’s eight plows, exiting the highway to get back on heading the other way. 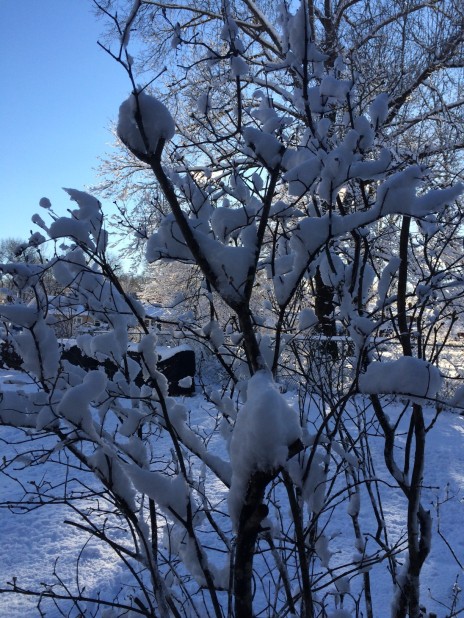 Snow stuck to a Lilac bush. 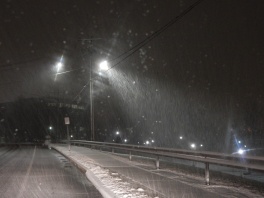 I pulled over prior to checking out Great River Park. The roads weren’t bad yet but it was snowing pretty hard. 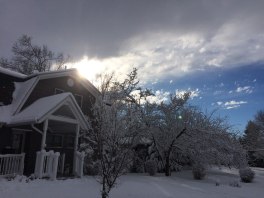 As I finished clearing the driveway, the sky was clearing too.

From my office, I could see that the snow was piling up nicely. 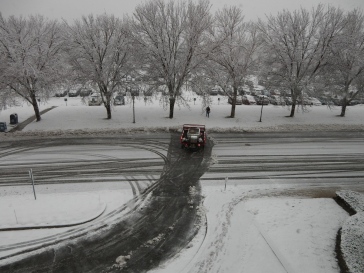 This poor guy was working non-stop throughout the storm 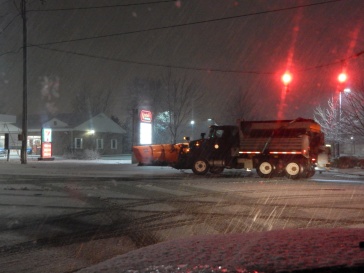 I stopped for some coffee on the way into work. This guy made a U-turn in the intersection, but I figured that was OK as I followed him to my office.

On Friday, we ended up with about 8” of snow, and we closed the office early to let people struggle with the ride home that was also threatened by snow.

If you haven’t see a snow plow at work, the video below shows a small one.