“We call this a trend that isn’t correcting itself”

Those are the final words in a Twitter stream ignited when one of my friends suggested that, perhaps the new Ultimate Banking edition of Monopoly would help end the chronic mistakes made by yours truly during games. This soon-to-be-released edition will use debit cards and an ATM to control the flow of funds during the game. Excuse me, but that’s just stupid.

Debit cards and an ATM?

Where’s the fun in that?

The whole reason for playing a board game is to step away from the technology that drives our lives. Granted, the only reason my friend knows that I sometimes confuse the bank’s money with my money is that my daughter Tweets about it, but that’s part of the fun. Otherwise her tweet would be:

Board games are meant to be played with people in charge, not computers. If we want to put our fines and taxes in the center of the board and let the first person to land on Free Parking claim it, that’s our choice. It is our choice, by the way. I’ve played with Free Parking money since my brother first cheated me out of my money taught me how to play the game in the 1960s. He didn’t really cheat, he just revealed the rules slowly and opportunistically. He also revealed a few rules that didn’t exist, but that’s what older brothers do. To this day, I don’t know if you can really collect rent while languishing in Jail.

My daughter plays Monopoly like her mother, with her money in neat little denominationally-restricted stacks, carefully and uniformly inserted halfway under the edge of the board. I put all my money in a heap. I put all my property in a heap too, along with the odd Get Out of Jail Free card. Every now and then, my wife will organize my money into stacks. It doesn’t last long. Within the space of a few transactions, there’s a pile again.

Monopoly can be interrupted.

My wife reorganized my money, but, as you can see, I don’t have much. that’s Faith being compassionate. 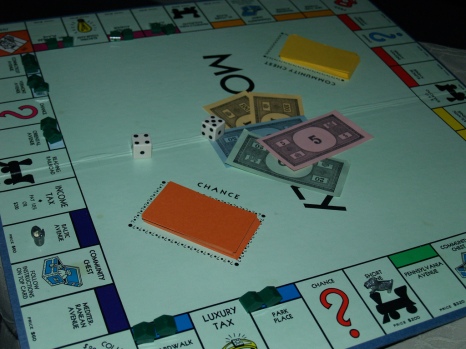 Free Parking – It’s how we play.

This post is part of Linda G. Hill’s One-Liner Wednesday series. If you’re not familiar with that, please slip on over to her site and join the fun.