If we were having a beer, you would start out by asking me about my recent trip.

“Hey, the traveling man is back. So, Ricky, given that you were in New Orleans all week, do you even want a beer?”

“I do. I’ll even buy, but don’t start any rumors about me traveling like Ricky Nelson. I’m a good boy. Cheryl, how about a Yuengling and a glass of wine for my buddy.”

“Actually, since you’re buying, I’ll have a Woodford Reserve, you know, in honor of your return from Bourbon Street.”

“I’m sure it’s less expensive than the drinks you’ve were buying all week.”

“That’s true, hotels and restaurants in tourist trap cities really know how to hammer you on alcohol.”

“Maybe that’s what they mean when they say ‘getting hammered’…or not.”

“Not in New Orleans, that’s for sure.”

“That does sound good.”

“So, did you start drinking on the plane, you know, try to get a head-start? ‘Cuz airline booze is really expensive.”

“Actually, beer on the plane was free but I only had one on the flight from Atlanta to New Orleans.”

“What? Are you some kind of fancy-schmancy-class passenger that gets free drinks now?”

“No, I paid an extra fee for more legroom. In addition to the extra 4”, I get to check one bag for free and I can have two beers.”

“I do it mainly for the legroom, I don’t usually have the beers.”

“A whole four inches. I don’t want to know what they bang you for that.”

“OK, apparently you’re as bad at recognizing direct statements as you are rhetorical questions.”

“No. I knew I’d end up shaking my head. $45, so you can have almost as much legroom as they used to give you in Coach. This is why I hate flying. If I paid that fee, I’d have two beers on every flight and I’d check a bag of rocks.”

“It is steep, but in Coach on this airline, my knees hit the seat in front of me.”

“OK, so not Coach but yet, not Business Class. Once on the ground, are you a taxi guy an Uber guy, or do you have a limo?”

“I’m a taxi guy, but New Orleans and Hartford could make me consider switching to Uber. The cab from MSY to the hotel was kinda gross.”

“Eeew! I understand how that would change your behavior in the Big Easy, but what’s wrong with Bradley?”

“I’m in the Flate-Rate zone, and they always want to make me wait.”

“They can’t do that; that’s illegal.”

“I know, but unless I tell them that I know that, and threaten to act on that knowledge, they’ll make me wait 45 minutes.”

“You could walk home in less time.”

“I have walked home, dragging my suitcase behind me.”

“There’s a good reason not to drink on the plane. Well, at least your hotel was probably a good deal, since you were attending a conference.”

“It was, but I paid an extra fee to get a room on an upper floor, with a skyline view.”

“Does your boss know you did that?”

“I paid that fee myself.”

“Does your wife know you did that?”

“She does. But, check it out. Look at the view from my room.”

“A construction site? What the…? Did you ask for your money back?”

“Are you kidding? Look at the cranes. I love cranes!”

“You’re nuts. Cheryl, since Ricky has a willingness to spend his money foolishly, pour me another Bourbon, please.” 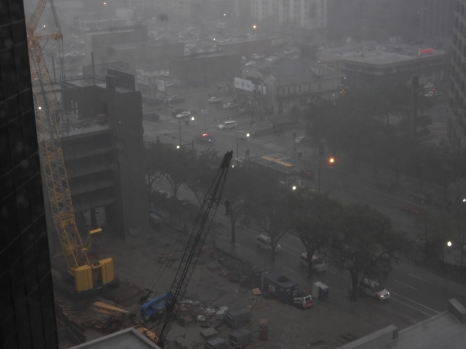 This was taken around 3:00 in the afternoon during a thunderstorm. 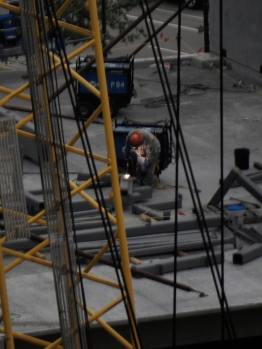 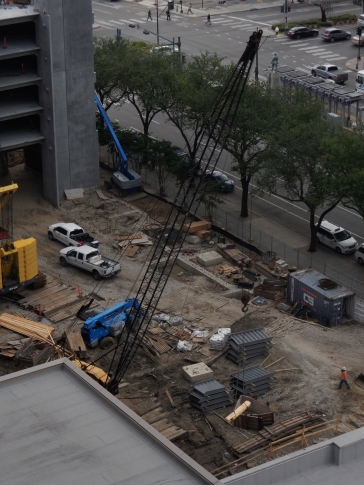 It was fun watching the crane pickup and deliver its load. 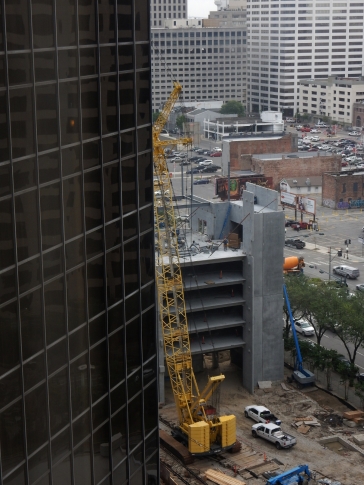 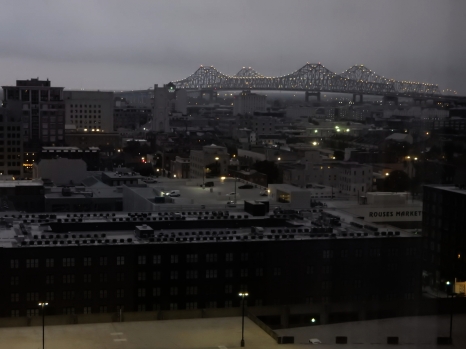 I did have other interesting things in my view. 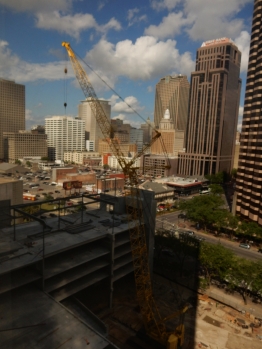 It’s a skyline view, it just has a crane in it. 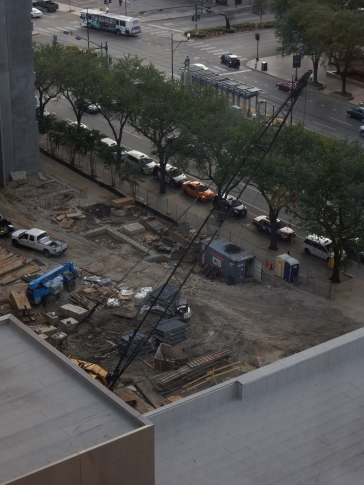 This is part of the view I paid extra for. I was thrilled! 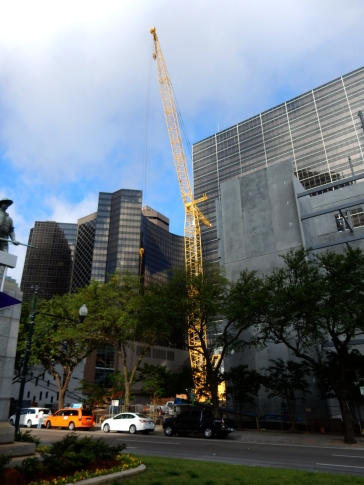 Here’s the view of the crane as I approached the hotel. 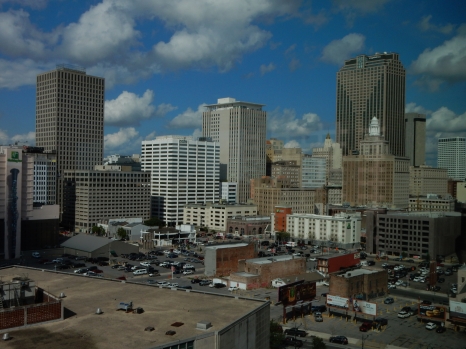 I could see parts of the city without a crane in the way. But what fun is that? 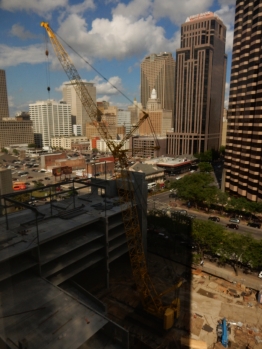 Much better view of the city. 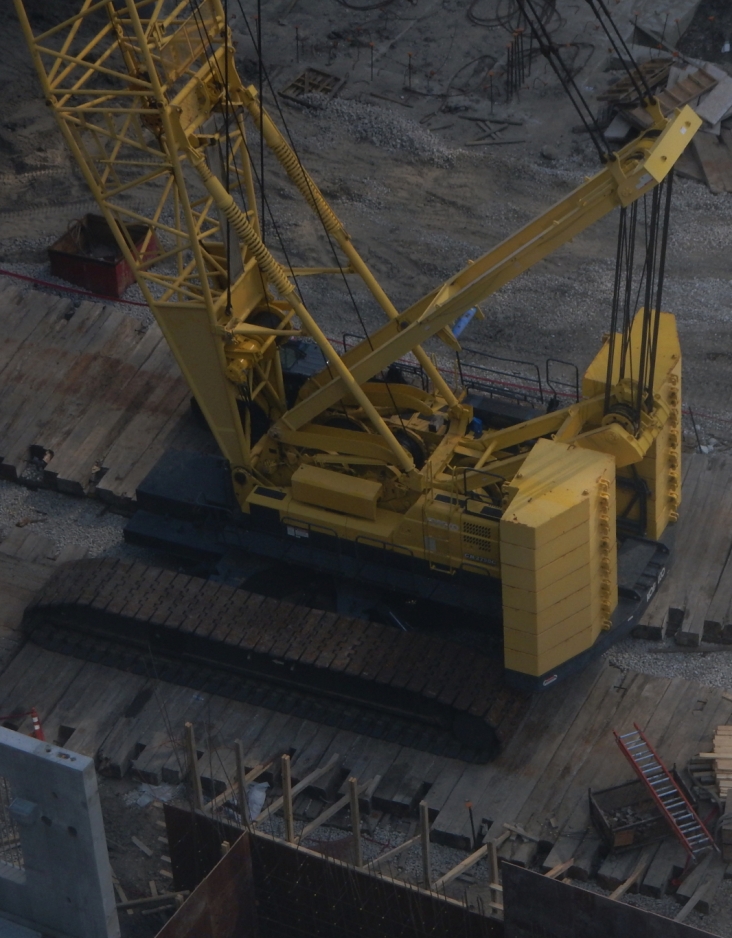 53 thoughts on “Fee-Fi-Fo-Fum and More Fees”