A need to research some building material for a project that we hope to undertake next month took me to Kelly-Fradet, my favorite lumber yard. You might remember them from a previous Thursday Doors post. While a very nice salesman was figuring out the specifications for a piece of engineered lumber we need to buy, I was taking pictures of doors. They sell doors. I thought I’d make a doors post about “potential” doors.

Then I headed home.

Then I saw Holy Trinity Church.

Three things caught my attention: First, the amazing brick work. Second, the red doors in, what I refer to as an Episcopal Arch (pointier), and, third, a shady parking lot. It was about 97 degrees that day. Walking around the church, I noticed a discrepancy, and an interesting bit of history. The name on the sign is Holy Trinity. The name on the plaque is St. Mary’s. The other name on the plaque was Augustus G. Hazard. Of course. The church is in Hazardville, a few blocks from the Hazardville Institute.

At first, I thought that I’d spend most of this post talking about Augustus G. Hazard. He was an interesting fellow, and there has been a lot written about him. I had assumed that the difference in the name was simply due to the church building being purchased as one congregation grew/shrank and another was looking for a home. Actually, the story about the church is more complicated, and I think more appropriate for the summer we’ve been having than the history of a man who made gunpowder. I’m sure I’ll have another occasion to talk about Augustus.

Holy Trinity church has always been an Episcopal parish, but 25 years ago, it was a struggling parish. It wasn’t alone. Calvary Church, in nearby Suffield, CT and St. Andrew’s Church, also in Enfield, were also struggling. Membership had dropped and it was becoming hard for all three churches to pay their bills and provide the type of service to their members and the community that they were known for. They decided to work together.

In 1992, they formed a cluster ministry of churches. Operating as a cluster, or regional ministry allowed them to share the expense of clergy and staff.

I don’t know if you have any experience with small churches, but sharing, i.e. not being in total control of the situation, is not easy. I’ve seen battle lines drawn that have eventually split individual congregations. The idea that three congregations could work together and share one set of resources, would not have occurred to me.

Not only were the three churches able to share, they actually came together as one body. In 2007 they merged into a single large, and stable, congregation. I particularly like this quote from the website of the relatively new Holy Trinity Church:

At a time when every story we read, watch and listen to is calling attention to the things that make us different and the things that drive us apart, I thought a story about coming together would be nice to read. Not that many years ago, these people were able to focus on what they had in common, and the ways in which they could help each other, and they were successful.

I love the details in the bricks and in the shingles and the little stations on the steeple. 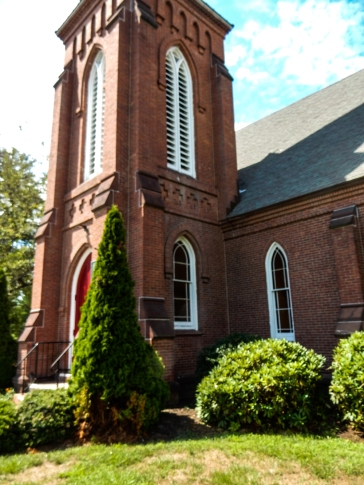 They really did a nice job with the bricks

I’ve read that the sharply pointed arches are meant to draw your eyes up to Heaven. 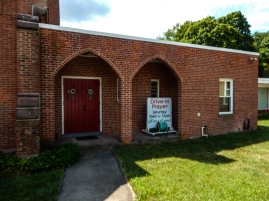 I’m pretty sure this is an addition, but the bricks match and I like how they mimicked the arches.

Simple red doors, but they look like you’re welcome to enter. 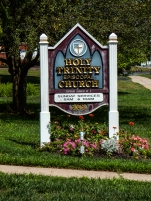 This parking lot offered me a few minutes in the shade

This story is part of an interesting and fun series called Thursday Doors. It’s facilitated each week by Norm Frampton. You can join the fun. Hop on over to Norm’s page and click the blue button. Be sure to check out Norm’s doors first, they’re always worth a look.