That would be as in “know your limitations” and find a way to work through life anyway. The actual one-liner was delivered by me to my daughter Faith, as she worked her way through a fairly difficult bit of woodworking. She gave me permission to post it here and to use some of the wonderful photos. So, I might just be making up for that sub-500 word Cherished Blogfest post.

“You are neither plumb nor level”

This started when Faith decided that she wanted to make a set of bookends for a friend. She liked the ones I had made last winter and was hoping to find a similar hunk of wood to use. The store where I bought that wood is 30 minutes north of our house and Faith is 45 minutes in the other direction. That’s a lot of driving to maybe find a piece of wood. So, we decided to use Facetime. I drove to the store and walked around the wood room pointing the camera at anything and everything interesting. They didn’t have much. This kind of wood comes to the market in waves, and, apparently, we are in a trough.

After ruling out all of the smaller pieces, I turned the camera to some large boards. We spied that mess at the right, tucked in with some thick slabs, and I took it out for a closer look. Faith was sold. She imagined that she could extract the interesting portion around those knots for the bookends. The remainder, she thinks, will make a nice bench.

Since Faith was thinking ahead to that bench, she wanted to preserve some long stock to use as legs. That meant cutting a rectangle out of the slab. The only tool I own that is capable of doing that is a jigsaw, and it’s barely capable. The first thing she needed to do was to drill two relief holes at the inside corners of that rectangle, so she could turn the blade 90° when she got there.

I gave her a cordless drill with a bit that was about half the size of the hole she needed. It’s easier to enlarge a small hole than it is to drill a large one in a single pass. I made today’s one-liner as she started to drill the first hole, holding the drill at multiple angles, none of them 90°

Realizing how critical it would be to have that hole perfectly perpendicular to the surface, she asked if we couldn’t somehow use the drill press. We wrestled the 60lb slab through the garage and up onto the drill press. Several clamps and outrigger supports later, she was ready to drill. Back on the saw horses, she missed the line a little, but she actually did pretty well considering that the blade only poked through the slab at the very bottom of its stroke. That causes vibration and makes the saw hard to control.

Once she set the target hunk free from the slab, she was on a roll. Surfaced, cut, arranged, cut some more, sanded, sanded and sanded, oiled and voilà, bookends!

This isn’t their home, but they are finished and ready to gift.

This will be perpendicular 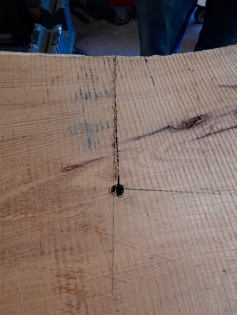 She missed the line, a little, but the blade landed in the relief hole, so…

We had to keep the chunk supported and the kerf open as she completed the cut.

This is looking pretty interesting 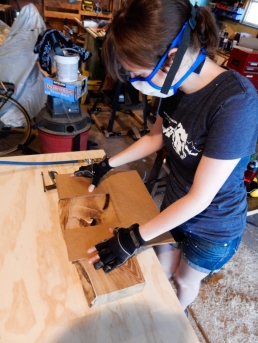 Trying to find the best looking place to cut this thing. 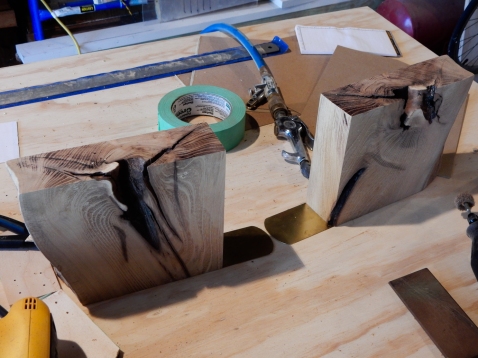 Done. They just need a couple coats of oil. 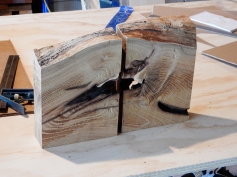 This was the original idea, but the ends are somewhat boring

It took a long time to decide where to cut this, but – it’s – done

This post is part of Linda G. Hill’s One-Liner Wednesday. Yes, I realize I exceeded 500 words. It felt good. You can check out the other entries, some of which are actually one line long over at Linda’s place.

If you have 7 seconds to spare, you can watch that slab make one pass through the planer.