Elm Street sits along the southern edge of Bushnell Park in Hartford, Connecticut and it boasts several of the city’s listed historic buildings. Today, several of these buildings are occupied by CT government departments – Hartford is the state capital, but these beauties began their lives serving Hartford’s signature industry, insurance. In the 1920s, Elm Street was known as “Insurance Row” boasting three major insurers along a small block. In the years since, the insurance industry has steadily fled Hartford for the suburbs and other states, and the state has grown from the ashes.

I use that metaphor because one of the buildings is the old Phoenix Mutual Life Insurance building. Phoenix hasn’t left Hartford; they moved their home office to an iconic structure, affectionately known as the Boat Building, near the CT River waterfront. The State Department of Environmental Protection moved into and eventually expanded the Phoenix building. I have to admit, considering the lowest-bidder mentality of the state, the addition doesn’t look too bad. They managed to come close with the façade and they did echo the window placement and even the mosaic panels.

A few years earlier, in 1914, The Scottish Union and National Insurance Co. building, was built at 75 Elm Street and became the first insurance company to sit beside Bushnell .Park. The company had an interesting lifespan, but sadly is no longer with us in any form. From the archive webpage:

An auspicious start, at least by American corporate standards. Also from their archive page, I love looking at some of the risks they insured against:

Despite their location in Hartford, I’m assuming they are still using the word “lift” in reference to elevators, an industry that also resides in the suburbs of Hartford. After 1927, Union Insurance merged, was acquired, and changed product line and names several times. Again, from the archive:

I’m not sure when the company abandoned the building at 75 Elm St, but it’s been the home of the State of CT Appellate Court since 2004.

The other buildings in the gallery are a little farther up Elm St from the CT-EPA offices. I was drawn to them by the presence of a blue door. One seems to be “in between tenants” while the others house a law firm and what appears to be private residences. The other major building on Elm St. requires a bit more research on my part and probably has enough history to rate its own post.

This really is a set of three buildings. The door on the left is blue, the middle is red and the right is green. 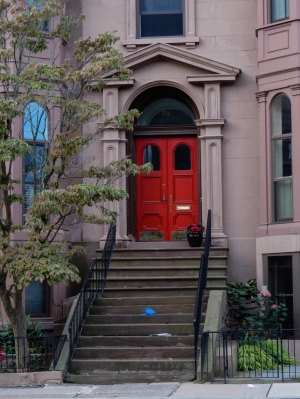 This building appears to be unoccupied at the moment. 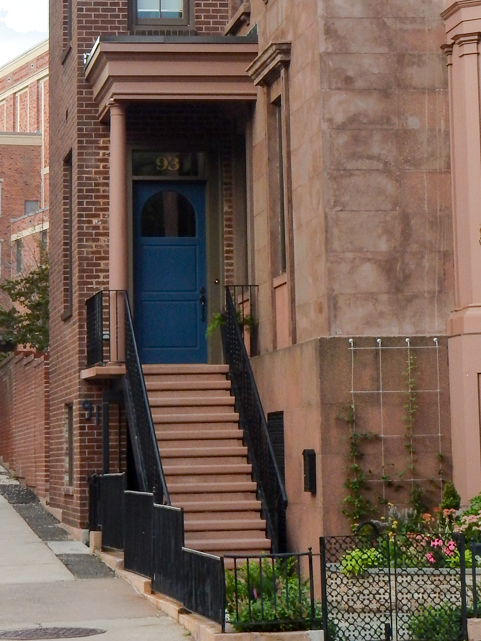 This appears to lead to a private residence.

For a state project, I think the addition turned out pretty well. It looks like they tried. 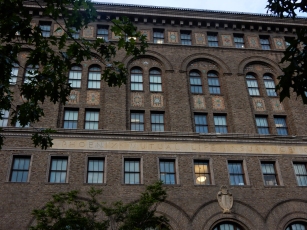 Of course, EPA would have a Smokey the Bear (I know, I know, Smokey Bear) and an electric car charging station.

So, the addition could have used a few arches. I love the original building.

I didn’t get a very good picture of this statues on both sides of the steps. This was the better of the two.

I think the official door guidelines of the Thursday Doors committee prohibits the posting of informational signs on glass doors. Whats’ wrong with these people?

Occupied, by a law firm, but not in as good a condition as the unoccupied building next door.

Appellate Court building. I’m not sure if the back 2/3 was a later addition.

I love te intricate brick work, the arches, the lamps and the mosaics.

Thursday Doors is a weekly opportunity to share and to see photos of doors from around the world. Facilitated by Norm Frampton, this web-based phenomenon is easy to participate in. Move on up to Norm’s page – look at his doors – ‘cuz it’s only right, and then click the blue button.