I’ve been promising the voices in my head that they could have a crack at Linda G. Hill’s SoCS prompt. They were pretty mad at me when I co-opted the prompt for a bar conversation last week. I’m going to give today’s prompt to them, but I’m not sure where we’re heading.

Your Friday prompt for Stream of Consciousness Saturday is: “bus.” Use it as it is, or find a word with the letters “bus” in it. Have fun!

It’s been a very busy week at work. Like most people in small businesses, I wear a few hats. One of them, the large hat, is involved with technology. I’ve been working on a mobile App for our customers. When I work on Apps – you know, I’m not really sure ‘App’ should be capitalized. It probably shouldn’t be, but “app” looks kinda dumb. The capital ‘A’ adds an air of importance, extends a kind of dignity to an otherwise ho-hum thing. I spend a lot of time building these apps and I don’t like to think that I’m working on ho-humery. Microsoft Word doesn’t seem to care if I use ‘App’ or ‘app’ but it clearly doesn’t like ‘humery’.

What do they know?

They also don’t like ‘kinda’ and, while ‘kinda’ is kind of an inappropriate contraction, you will find it in a few online dictionaries. Yes, I know: “online dictionaries and online grammar-reference sites are not to be trusted” That’s my editor talking, and she’s talking about you, Grammar Girl.

Anyway, back to the apps I work on, the ones for our employees are all iOS apps, i.e. apps for Apple devices. Apple needs to be capitalized, ‘cuz, you know, Apple. Maybe that’s how we got ‘Apps’ in the first place. Apple was the first smartphone vendor – I know, I know, the phones aren’t smart – they gave us apps.

OK, I looked this up. According to some omnibus site for spelling, ‘App’ should only be capitalized when it’s the first word in a sentence, and the scholars who answered this question suggested writing out ‘application’ instead of ‘app’.

What do they know.

In this case, the case of the app I was working on, it’s a webapp. Oooh, Word does not like webapp. It also doesn’t like oooh, but I needed more ‘ooo’ than ‘oo’ provided, so I’m sticking with it. Wikipedia defines ‘webapp’ as follows:

“In computing, a web application or web app is a client–server software application in which the client (or user interface) runs in a web browser.”

What do they know.

I know, Wikipedia is in the same not-to-be-trusted pool as Grammar Girl. In this case, I agree. In my case, ‘webapp’ refers to an app that runs in a browser but can also kinda/sorta (yeah, yeah kind of / sort of)…sheesh…be installed on your phone. It doesn’t have to be some fancy-schmancy client-server thingie. I write those too; I know what I’m talking about.

I came in bright and early Monday morning, only to find that the coffee maker was busted. Technically, it was leaking, but there’s no ‘bus’ in leaking. I called the coffee maker people and I had a most unpleasant conversation:

“Hi, we need service for our coffee maker.”

“The water line going into the filter is leaking.”

“OK, we will have someone out there within 48 hours.”

“That’s crazy talk. 48 hours is fine for a Fax machine or a copier or for that defibrillator thingie, but this is a CAW-FEE-MAKE-ERR – we can’t go 48 hours without coffee!”

I had to go out and buy Box o’Joes. Note: Box o’Joes are boxes of Dunkin Donuts coffee. Otherwise, I could be accused of abusing our employees.

After securing the Box o’Joes, I noticed that the refrigerator was also leaking. It was an appliance conspiracy.

I don’t know what was wrong with the fridge. Someone suggested that construction workers may have de-energized the power bus.

I work with engineers. They talk like that. I would have said “turned off the breaker” but…

The bottom of the fridge was full of slush. The ice in the ice-maker tray had melted and frozen into a blobish thing. The stuff in the freezer and fridge was all wet with condensation, but both compartments were cold. I told people that they might want to throw their food out, but most ignored me. I guess having no coffee and no food was too much to bear.

By Wednesday, we had coffee, ice and cold food, but I didn’t like the way the dishwasher was looking at me. 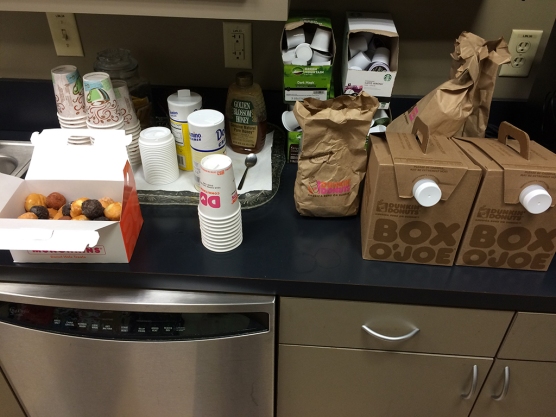 That’s what I’m talk about 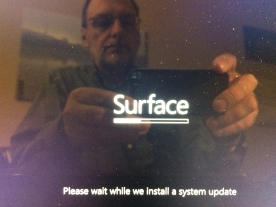 This process took about 45 minutes. 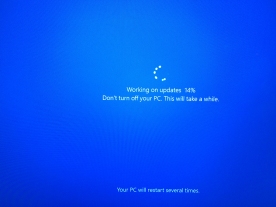 In addition to the appliances, my PC decided it needed major updates 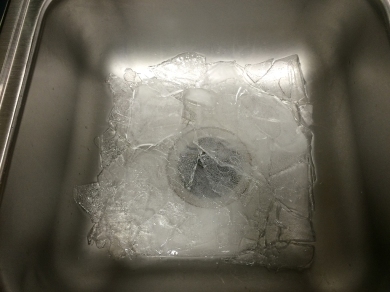 Previous pictures of the ice in the bottom of the fridge show a much more well formed ice sheet. 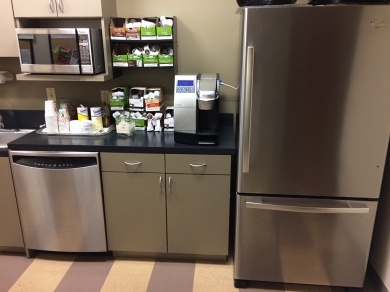 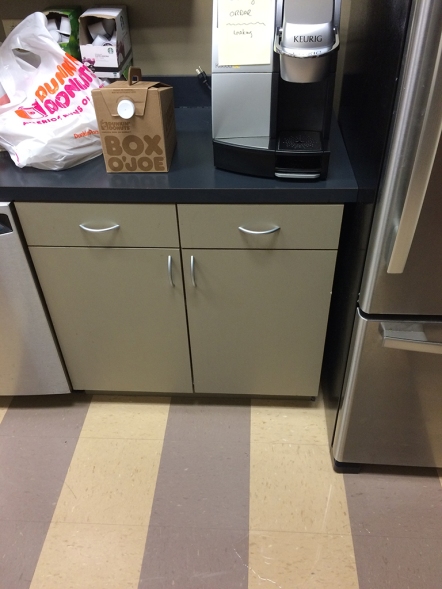 Coffee is OK – Fridge is upset at the attention the coffee maker is getting. 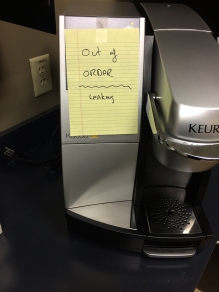 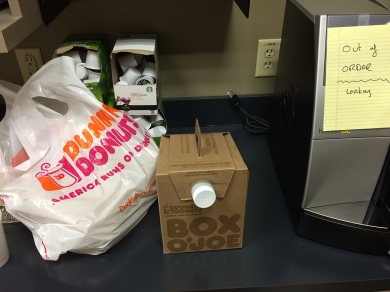 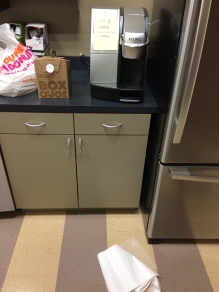