A few days ago, actually, it was over a week ago, but there’s no real time-keeper in the blog universe…is there? Anyway, whenever it was, I was reading a post from my blog-buddy Dan. You know Dan. Dan is the guy in southern California who is sometimes in Poland and sometimes in a pool hall and has been known to steal rescue plants from his uncaring neighbors. He debates all manner of things. He goes places I won’t go. Places angels fear to tread. Dan’s tough. He was a teacher in a Catholic school. You have to be tough to teach in those schools, otherwise, the good sisters will tread all over you and the angels you rode in with.

OK, so I was over at Dan’s place, and he was talking about the first presidential candidate’s debate. You should read his post, but you might want to continue here first. Don’t worry, I’ll give you the link again, later.

Dan mentioned that one of his Facebook buddies has turned on him during the election season. Dan didn’t say this next bit, well a ‘Dan’ said it, but not that Dan. Readers often confuse Dan for Dan when I reblog his posts. I’ll try to be more specific.

East coast Dan thinks losing friends because you don’t ardently support the candidate of their choice makes it seem like less of a loss. How good a friend were they in the first place? It’s also stupid. I mean, if I were only friends with people that think like me, I’d be in trouble.

“my buddy…Well , could be , more correctly stated , my ex-buddy , because his Facebook posts label me as various things :  an idiot , a coward , etc. , and ,lately , as a “sycophant”.  Not that I take it personally, but I’ll be sure to get that checked sometime soon.”

I didn’t really know what sycophant meant. I’ve heard the term before. I’ve deduced its meaning from context, but I wouldn’t be able to define it, or use it in a sentence in a spelling bee if one of the contestants asked. I’d probably say:

“One of west coast Dan’s friends thinks he’s a sycophant” – which wouldn’t help, but how does hearing the word in a sentence help you spell it, anyway?

It’s not like ‘sycophant’ is bandied around a lot at work, or used in the social circles in which I travel.

See what I did there? I did that whole preposition thing correctly to make it seem like I’m smarter than a guy who doesn’t know what ‘sycophant’ means. If I had said: “the circles I travel in” you might have thought, “sheesh, I’m not surprised he doesn’t know what sycophant means; he ended a sentence with a preposition.”

Maybe it’s just me, but a lot of the words I understand in conversation, are words I might not be able to define to a spelling bee contestant. Maybe it’s not a lot of words. Maybe that makes me sound dumb. I’m not. Go back and see that preposition thing.

When I see those words online, I look them up. I want to be able to use them correctly in my writing, or when I refer to Dan on Facebook.

Who does that? Who defines a word using a word that the kind of people who don’t know the meaning of the first word would have to look up? I mean, if I don’t know where Portland, Oregon is, telling me that it’s northeast of Beaverton probably isn’t going to help. Maybe if you told me that the blue thing is the Pacific Ocean…just sayin’.

By the way, did you know that Portland, OR could have been Boston, OR? Those were the two choices. They flipped a coin to decide and Portland won. I dunno, maybe that’s folklore, ‘cuz, Wikipedia, but it’s interesting and it lets me use ‘coin’ again. I wanted to use ‘coin’ again because this post is part of Linda G. Hill’s Stream of Consciousness Saturday thingie:

Your Friday prompt for Stream of Consciousness Saturday is: “coin.” Use it any way you’d like. Enjoy!

I decided to let the eggheads at Google have another shot.

Is it me? Am I just shooting blanks on the vocabulary range or is ‘servile’ a word you might not use to define ‘obsequious’? Again, assume that the person asking you to define obsequious doesn’t know what it means.

That’s like defining ‘lavender’ as a color similar to ‘mauve’. Is lavender similar to mauve? I don’t really know. I’m somewhat colorblind. If the color isn’t in the Crayola box of eight, it’s suspect in my book.

I’m worried about Google. I’m concerned that my next conversation with Google Maps is going to go something like this:

“I need directions to the airport.”

“A furlong is the length of a furrow that oxen can plow before they are rested.”

By the way, ‘servile’ for those that are interested, means:

In other words, obsequious, perhaps even rising to the level of being a sycophant.

Now, you are full prepared to read west-coast Dan’s post.

I don’t have any pictures of Portland, but I have some from the Loop Drive around Mt. Hood and a hike to the top of Multnomah Falls, taken in 2006.

On the Mt Hood loop drive, looking forward to the next stop.

Multnomah Falls – Our hike to the top will take us over that bridge, 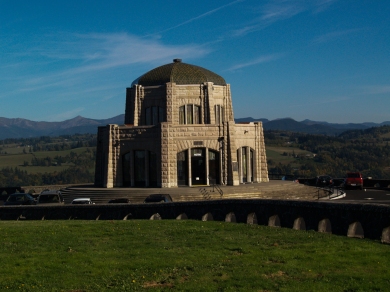 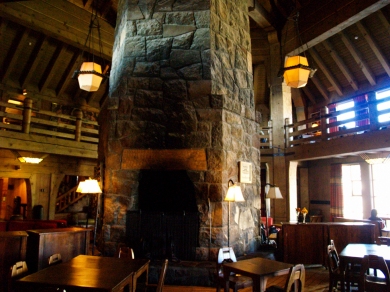 Inside Timberline Lodge on Mt Hood 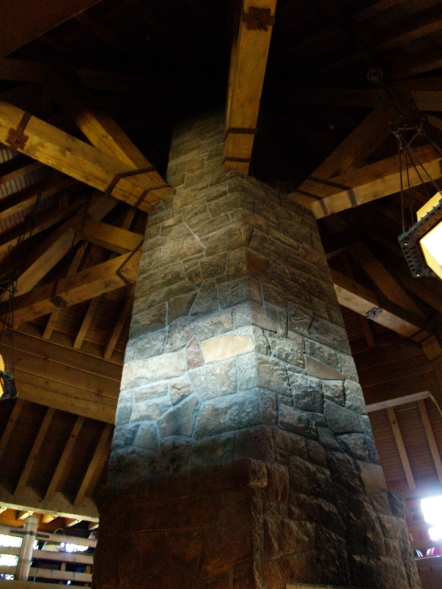 I’m not sure what peak that is. I think it’s Mt. Adams.

I’m not passing up a crane on the Columbia River

Bonneville Dam, on the Columbia River, east of Portland. 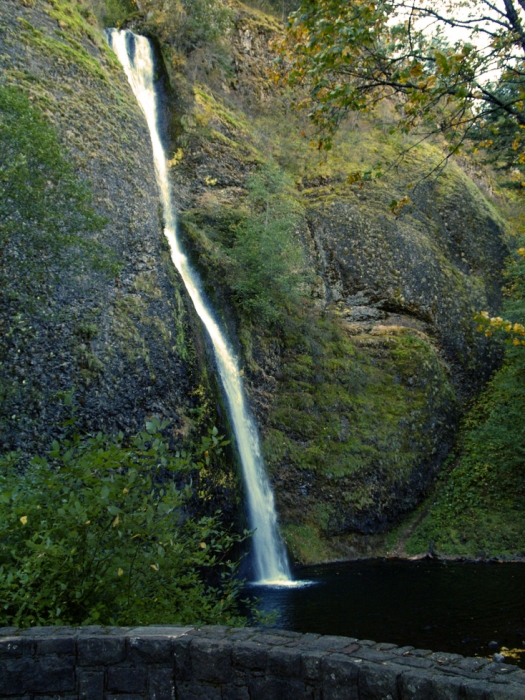 Horsetail Falls – also on the loop to Mt Hood. This part parallels the Columbia River. 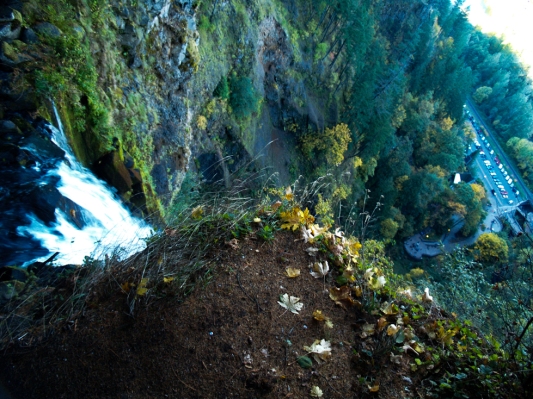 At the base of Multnomah Falls as we began our hike to the top,