Yeah, yeah, the kids will be out in full costumed force tonight, but by the time you venture back into Target, Wal*Mart, Sears or wherever it is you shop, it will be Christmas. If it isn’t already Christmas. Lest you think I left Home Depot off the list, I didn’t, they’re just ahead of the curve. I guess they don’t really sell much Trick-or-Treat stuff so, Christmas trees and decorations. Lights, lots of lights.

“Buying them is so much easier than untangling them!”

I was in Home Depot last week. I needed to buy some burlap. We use it to wrap things that the birds would otherwise make a mess on. Things that have to stay outside for the winter, like the hose cart and the iron bench near my wife’s Maddie’s patio. We might also use it to wrap a recently-transplanted bush. In any case, it’s the kind of stuff a person might buy in October because they might need to use it in October. Home Depot had some, but I couldn’t get to it. The aisle was blocked with stacks of boxes and pallets of stuff they will be selling on Black Friday.

Stores do this at this time of year. They stockpile stuff they’re planning to practically give away in a month, and if it impedes you from shopping today, so be it.

Last year, I needed a snow shovel. Yes, I’m one of those people who buys snow shovels before it snows. We also buy batteries, water and bread before it snows. Call us crazy, but that’s how we roll. Anyway, the snow shovel I wanted was one I had bought before at Home Depot. It’s a plastic job that can be used on Trex – no metal on Trex – and I wanted a second one for the back stairs. I saw a large bundle of them on the shelf at Home Depot.

I asked for help getting one down. Big mistake:

“Those are for Black Friday. We can’t sell any until then.”

“So, you can’t sell me one snow shovel, at full retail price today, because you’re saving it to sell at cost, a month from now?”

I should have just cut one lose and put it in my cart. I could just see the headlines:

Home Depot loses some of my money each year when they do this. As soon as I see those pallets in the aisle, I start avoiding the store. Every time I avoid the big box, I am reminded of how much simpler shopping in a smaller local store can be. First, I can go door-to-shop-to-door in less time than I can drive to Home Depot. Second, I know where everything is, and guess what, it’s where it was the last time. Some of the big boxes like to move things around. A lot!

I do look forward to Christmas. It is perhaps the most meaningful holiday in my life. I also enjoy the general spirit around the holiday season. However, as I get older, I enjoy shopping less and less. I enjoy the commercial nature of the holidays, less and less…and less. By the time Christmas gets here, I’ll be listening to CDs in my car as a way to avoid the “popular” Christmas carols. I’ll be watching my favorite actors portray Ebenezer Scrooge, because I bought the DVDs long ago, or I recorded them during their analytics-driven-perfect-time-slot, and I’ll be actively seeking ways to avoid stepping in a store. The sooner they put up the decorations, the sooner I’m putting them on the naughty list.

The only store I can think to put on the good list is REI. Last year, REI decided to close their stores on the Friday after Thanksgiving and encourage their customer to go hiking instead. The program is called Opt Outside, and at last count, almost 700,000 people are participating. Our daughter is one of them, and we’ll spend some money at REI this season, if when she tells us what she wants.

I don’t think I’ll be hiking over that weekend but I won’t be shopping. I may be watching some football, and eating some leftovers. If the temperature is mild enough, I may spend some time in my workshop. Hopefully, I will have given some though to the things in my life I am thankful for, and hopefully I’ll remember the reasons we celebrate these holidays.

A good bartender has candy

Those are Christmas lights.

Those are Christmas lights under the pumpkins. It’s over. 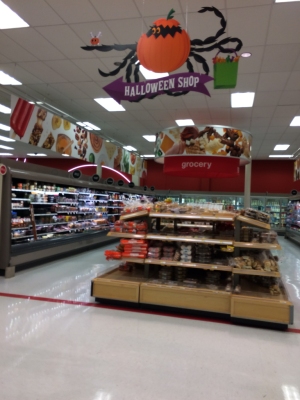 Not much left. Fruitcakes will be here tomorrow 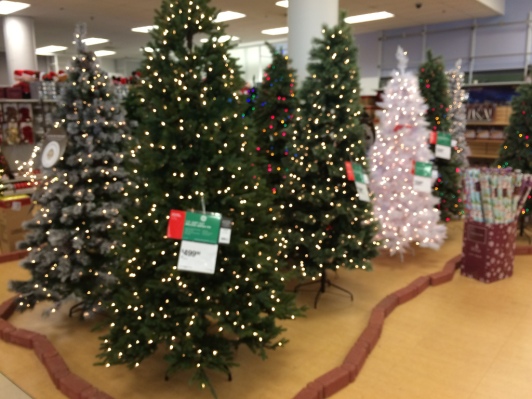 Yes, they are on sale 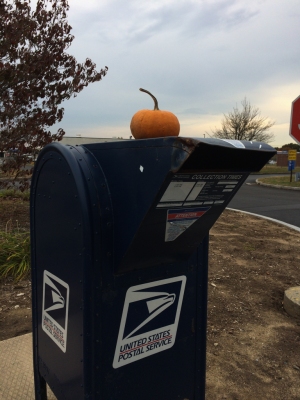 Maddie likes to sit on her patio 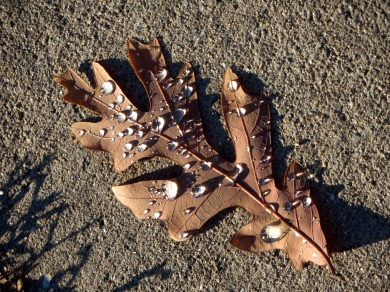 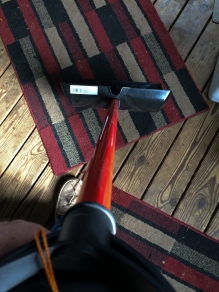 It’s almost time to put this guy back to work