When I was writing about my experience in English literature for last week’s SoCS challenge, I wanted to find a picture of Woodburn Hall, since that’s where I had several English classes. I haven’t been to West Virginia University since 2009, when I took our daughter on a whirlwind tour of some western Pennsylvania and West Virginia sights from my youth. Of course, I never expected to see much in the way of door photos, but I was pleasantly surprised by the photos I had.

In fairness to Norm, I have to warn you that some of the photos are more of entrances than doors. Norm, by the way, is the guy who runs the whole Thursday Doors enterprise. If you want to participate, or even if you just want to see a bunch of doors, scoot on up to Norm’s place. After checking out his doors, click on the blue froggy thing. That will lead you to the list of door aficionados and their collective catch of the week.

WVU is an urban university, spread across three campuses. To call it “urban” when I was a student was a bit of a stretch. Morgantown, WV had about 20,000-25,000 residents and WVU had about 20,000 students. Still, some pretty busy roads ran through the heart of the downtown campus where most of my classes were. The Evansdale Campus was home to Engineering, some dorms, the Coliseum and the Medical Center. That campus was about 2 miles away. You could drive, if you had a car and if you could find a parking space, (two pretty big ifs) or you could take the People Mover. Technically, that would be the Personal Rapid Transit system or PRT.

The PRT was built by Boeing and the US Government built the monorail style system in the 60’s when there were plans to have systems like this in every city in America. We had a test system like this near where I grew up, outside of Pittsburgh. Taxpayers killed the Pittsburgh plan. Boeing dropped out of the business but WVU has been maintaining the system on their own since it began moving people regularly in 1975. It was called “personal” because you summoned your own car, it showed up and you and any others who wanted to go, boarded the car and zipped along at about 30 mph (48.3 kph). Not exactly fast, but faster than afternoon traffic on University Avenue.

The Downtown campus has several buildings that were important to me. Clark Hall, a.k.a. the chemistry building and Chemical Research library and labs was where I spent most of my time. Woodburn Hall is where they taught Language Arts, and, as you may remember, I took English, Scientific German and Poetry there. Woodburn Hall is the anchor building of Woodburn Circle which remains the historic center of WVU’s campus. The other buildings in Woodburn Circle are Martin Hall and Chitwood Hall. I took classes in Logic in Chitwood Hall because they were part of the School of Philosophy.

Across from Woodburn Circle is the Mountainlair – the student union. The Lair, as it was known had a large cafeteria, movie theater, bowling alley, pool tables and other places to gather and relax. There was also a student bar in the lower level, but that no longer seems to be listed. I learned to play Backgammon in the Lair. The person with the fewest points, bought the next pitcher when required (the score was reset with each pitcher).

You will notice in some of the photos in the gallery, that West Virginia is hill country. Walking was exercise and driving a “three-on-the-tree” standard transmission car was exciting, to say the least.

WVU has over 30,000 students now. The campus has been expanding in the Evansdale area and there’s even talk of expanding the PRT – if they can find the parts.

I’ve gone back to using a gallery. I like the fact that if I need to reuse the photos, I don’t have to rewrite the description. The buildings I didn’t describe here are described in the captions. You can click on any one of them to start a slide show that will include the captions. Note: there are extra photos today, for some other WVU Alumni .to enjoy

I’ll leave you with a funny story about the day we visited the Alumni Center. We had driven down on a Saturday, toured the campus and decided to check out the Alumni Center on our way back out of town. That building didn’t exist when I was a student.

We walked inside and proceeded to give ourselves a self-guided tour. In the center of a table near the entrance was a basket of river rocks and some silver Sharpies. The sign said something like “tell us about yourselves.” I took a rock and a Sharpie and told how I had come down from Connecticut and really enjoyed my visit. Next, we took the stairs up to the second level, but found most of the offices closed. A security guard met us, and informed us that the building was closed to the public for a wedding reception.

Later, as we were eating lunch, I realized that those river rocks were for the wedding party…oh well.

In some late-breaking news, per the arrangement between Norm and Cee, this post is also part of Cee’s Fun Foto Challenge this week. You can head over to her page and find even more doors! 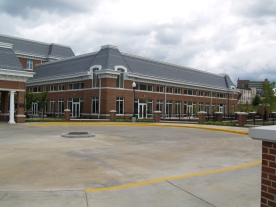 WVU Alumni Association – I’m sure there’s a door in there. Look, up on the balcony. 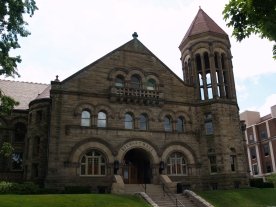 Stewart Hall was an administration building when I was a student. It was in this building that my advisor brokered the deal to get me out of Freshmen English

This is me, prior to defacing the river rock.

Life Sciences. This was a new building that replaced the Biology Building and a portion of the old Mountaineer Football stadium

These are People Mover cars at the downtown terminal. Yes, they do look like animal cracker boxes. 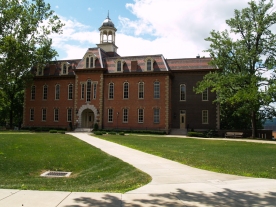 Chitwood Hall (with a little bit of door showing)

Ogelbay Hall – I took Physiology in this building

High Street – aptly named, home to several dormitories and fraternity houses. A beer keg or two was known to roll down that hill.

The Mountaineer, with the entrance to the bookstore behind him. Now run by Barnes and Nobel :(

This is the upper entrance to the Mountainlair. This is new. When I was there, this was just a bland, hard set of steps.

That’s the original section of Clark Hall, where I had all of my chemistry classes.

This is the Clark Hall annex. The research library is on the lower level and research labs are on the upper floors.