Apologies to Judy, if she hasn’t yet had her coffee, and to Mary (please don’t take away my bonus points), and to all the others who don’t like math, but it’s Monday, and this is a true story, so:

“If car ‘A’ leaves Hartford, Connecticut at 8:30 am going west at 70 mph and car ‘B’ leaves Ames, Iowa at midnight, going east at the same speed, what time is dinner on Neville Island?“

Wrapped around the weekend before this past one was an 1,107-mile road trip for Faith and I and an 1,800 mile round trip for my brother. Lots of people I know have told me that that’s a crazy amount of time to spend in a car, but I’ve driven farther. I’ve driven cross-country (twice). I’ve driven the entire west coast and a big hunk of the east coast. I love road trips.

The purpose of this trip was to experience Pittsburgh. To visit family graves, to have breakfast at Eat’n Park, to see the Pens win a hockey game and the Steelers…the less said about that, the better, and to snag some photos. Specifically, doors. I made a deal with Faith: “if we go to Pittsburgh, you have to help me get some door photos.” She agreed. Small price to pay, and all that.

I wanted to leave early. I always want to leave early, but Faith had worked very late the night before. We compromised. I left early for her house, which allowed me to avoid Hartford’s rush hour traffic but we agreed to leave her house at a more reasonable time.

Faith added that caveat to the deal, because I pace. I’ve always paced. My father used to compare me to some insect and tell me to “light somewhere” when I was little. As I grew older, “light” became “sit your ass” or he’d give me things to do.

I think Faith and my wife are also looking to expanding that clause to include “mental pacing” because, I do that too. I don’t know how they can tell. Maybe it’s the way I look at my watch, or my phone, or the comments I make, but it’s clear I’m pacing inside. It reminds me of John Lennon’s song “Crippled Inside” – I mean, it’s not the same, but kinda. I guess I can’t hide it.

The problem with leaving Connecticut early, is that while we avoid the CT/NY traffic, we hit rush hour traffic in Scranton, PA. Oddly enough, leaving later allowed us to miss traffic in both areas. The only downside to leaving later was having to admit to Faith that she was right.

The first time Faith and I drove to Pittsburgh, it was part of a hastily arranged trip when she was facing a “use it or lose it” moment with her vacation time at work. I was searching Marriott’s website for a hotel where we could stay using reward points, near places we could drive to:

“OK, there’s a Fairfield Inn on Neville Island, near Pittsburgh.”

“Ooooh, an island, that sounds nice.”

“Um, yeah, maybe not the kind of island you’re imagining.”

Neville Island, PA is an industrial island in the middle of the Ohio River. During WWII, Dravo Corporation built landing crafts on Neville Island. Not exactly white sand and palm trees. What the area lacks in ambience, the hotel makes up for in convenience. It’s literally under I-79. Take the off-ramp, drive into the hotel.

Getting there requires driving across I-80, a road well-known for heavy truck traffic and many, many deer strikes. Dead deer. Bloodstained highway. Faith dubbed it “carnage highway” as she was driving. The worst part of driving on I-80 is when a truck going 62 mph decides to pass a truck going 60 mph. Actually, the worst part is when that happens while it’s raining…which it was…when Faith was driving. On the plus side, central Pennsylvania is beautiful country. You roll through the Allegheny Mountains, over rivers and streams and past some picturesque farmland.

As for the answer to the math problem: It was a trick question. Delays and detours in Indiana caused my brother to be late. We had dinner in McKees Rocks around 8:30 pm. I explained during dinner that some of my readers like to see pictures of food, Faith pointed out that I should have taken them as the food arrived, but I’m still learning. 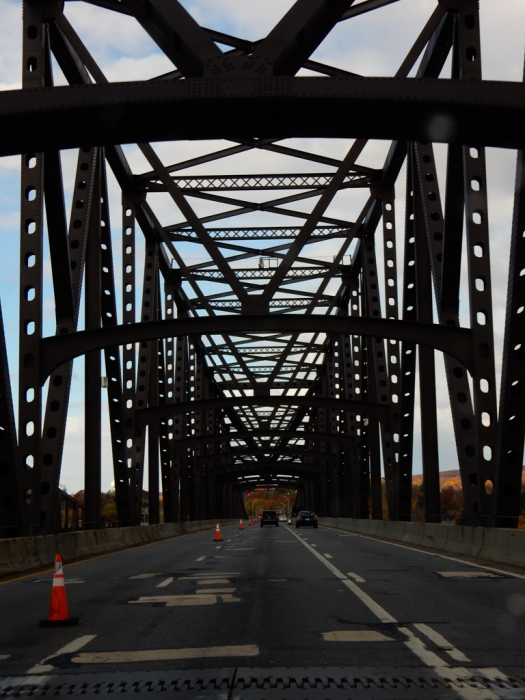 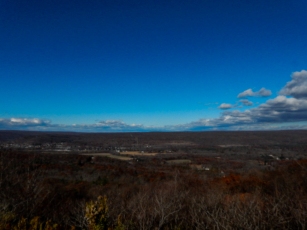 We stopped at this overlook in NY early on our trip

“Quick, get my camera – cranes! Cranes!”

Up and down and through the hills – for 6 hours

You know Faith is driving when you see the Jersey barriers. She always finds construction 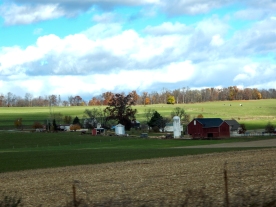 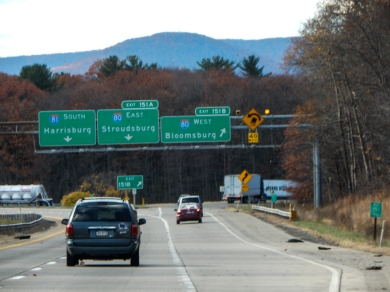 Hang a right up here but watch for tipping trucks 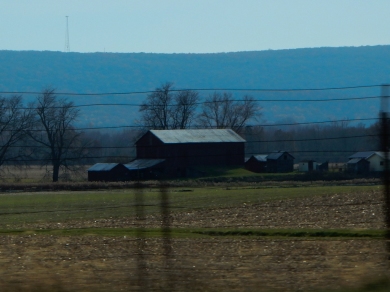 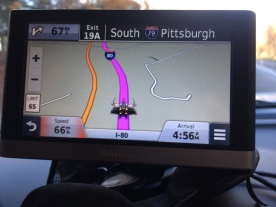 A good time to arrive

Neville Island – next exit. That’s our hotel, under the billboard on the left

Fried Mushrooms – One of my favorite appetizers. I had to leave some on the plate though.