“What’s with the palm tree photos?”

“I was in southern California early this week.”

“And you just had to put those out there so us schlubs back here in the cold would know.”

“I don’t really put a lot of thought into it. I take a lot of pictures. I post pictures all the time.”

“I know, I know. And, in case you aren’t aware, neither Great River Park nor Hartford have moved recently.”

“What are you saying?”

“Just that if you’ve seen one photo of Hartford from the park, maybe you’ve seen enough.”

“Hey guys. House Lager? Meiomi? By the way, you can take photographs at the same place every day and still keep it interesting.”

“Maybe you can, Cheryl. I’m not sure Captain Kodak has mastered that, yet.”

“I mix it up. Sometimes, it’s the city skyline, sometimes it’s looking south along the river or across the river at the Colt building.”

“Colt, ugh, feel free to leave those out.”

“The Colt complex – Coltsville – the old armory. All part of a National Park now. Big feather in Hartford’s cap.”

“Yeah, like the baseball stadium. Where are they getting the money to open it?”

“It’s a moot point, really. The city is broke. They can’t pay their sewer bill, but they want to open a National Park.”

“But the city needs attractions to entice people to visit and spend money.”

“Exactly, look up the meaning of ‘moot’ and you’ll see that I was right.”

“I’ll take your word for it. In any case, I’m looking forward to taking the walking tour next year.”

“Good for you. I’m busy that day. Did you do anything interesting in SoCal?”

“Not really. No time for that. In and out for a series of meetings.”

“I met a friend for breakfast at Bake-n-Broil.”

“Here’s your beer, your wine, and lemmie guess, pancakes and bacon were involved with that breakfast.”

Short stack on the side. 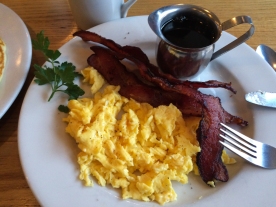 “What’s that supposed to mean?”

“Just that there had to be lots of trendy places for breakfast, but you found one that sounds like the west coast equivalent of a diner.”

“Well, my buddy found it, but yeah, diner. I love diners”

“Again, my point. What about lunch and dinner?”

“Other than that breakfast, meals were planned by someone else. Dinner the first night was pretty good. Local restaurant, steak and sides. After that, hotel food.”

“Continental breakfast where everything looks good but nothing really tastes good?”

“Sitting on smashed potatoes with two asparagus spears – Am I right?”

“Ooh, splurge. They must like you. What about desert?”

“Listen to you, raspberry glaze…”

“I remember it because I wore it home. The waiter dropped some and in a weird instinctive reaction, I trapped it between my sleeve and the front of my shirt.”

“They can dress you up, but they can’t take you out.”

“If my wife can’t get those stains out, they may not be able to dress me up either.”

“You guys need a refill? Your wife should send you off with a Stain Stick in your luggage when you travel.”

“When I travel, Cheryl? She thinks I should have one with me at all times. Like an Epi-Pen for klutzes. I think we’re ready for another round.”

“Then I’ll switch to Bourbon, Cheryl.”

“I always forget, order first, then volunteer to pay.”

So, three days out there with the pretty people, one good breakfast and one decent dinner, that’s not a bad average.”

“I left out the best part.”

“Lunch on the way to the airport. A buddy of mine from the meeting and I stopped…”

“We did – In-N-Out Burger – Cheeseburger, fries and a chocolate shake.”

Typical California. A fire in the fire place but the AC is on to keep it comfy. 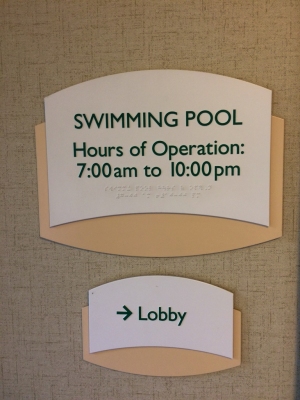 Yeah, not in Connecticut

It was nice to see green 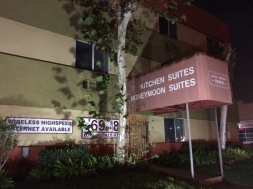 Not my hotel, but I had to take a picture.

I haven’t seen fresh-cut grass on the sidewalk for two months.

In addition to the usual bar banter, this post is part of Linda G. Hill’s fun series: “Stream of Consciousness Saturday”

Your Friday prompt for Stream of Consciousness Saturday is: “moot.” Use it as the theme of your post or just use the word in a stream of consciousness post about something else. Enjoy!

In case the title got that song stuck in your head, here’s a version you can listen to. It’s 22 in Connecticut, with snow and freezing fog.