The fight or flight response is ingrained in our DNA. Spinal cord, sympathetic nervous systems, adrenal medulla, the general adaptation syndrome, blah, blah, blah and a whole bunch of sciency stuff that I’m not sure we need to go into. At least not here, today. I like to leave myself room to return to the sciency stuff in the future. If you can’t wait, you can read more on Wikipedia. I want to share three stories I’ve collected that suggest that we need a third option, because some people are governed by a pathetic nervous system, or maybe a malevolent nervous system or a nervous system that is impaired.

For various reasons, mainly that I think these people have suffered enough at the hands of their own adrenal medulla, I’m not going to use real names or include links to the articles I’m quoting.

One story is about a woman who was trying to cut in front of a long line of people who were waiting to enter a popular bar. She ran into John Howell’s frequent character, Tiny the bouncer. Literally, she ran into him. Tiny said: “she took a three-point-stance like a football lineman, charged at me, and struck me with her shoulder.” Tiny, again literally, was unmoved. He pushed her away, causing her to fall – at the feet of two police officers. She got up and, according to the news report:

“…she began walking away despite officers ordering her to stop…when one officer placed his left arm inside her right arm to stop her, she punched him in the face with her left hand.”

The story ends with this woman in handcuffs, in a police wagon, kicking and screaming on her way to jail.

The second story begins when officers responded to a report of a domestic dispute involving a drunk man who was demanding to drive.

Officers in two police cruisers, responded to the incident, and when the second officer arrived, a pickup truck sped out of the driveway, drove toward the officer, crashed into his cruiser head-on, rendering it inoperative.

“The suspect then drove over a neighbor’s lawn, nearly hitting a tree and the other cruiser before speeding away, engaging officers in pursuit.”

“The suspect fled on foot and was captured by a police dog without further incident.”

See, this is where I think our nervous system needs to show some genuine sympathy and ask to see what’s behind door number three. Fight? Flight? Or, do I have another option?

Consider our second suspect, the police knew who he was, they knew where he lived and they witnessed him commit a far worse crime than driving under the influence. The woman trying to barge into the bar, probably would have been given a ride home, or spent a few hours in jail, throwing sobering-up. Tiny does this for a living, he wouldn’t have pressed charges. This would have just been one more story that he loves to tell.

The third story is one that I love to tell. It happened many years ago, and it starts with ignoring an axiom that has been passed down from father to son, for decades:

“You can’t outrun a radio.”

We join our third suspect while he was driving – erratically – impaired – speeding. When he noticed a police car in pursuit, he increased his speed. Traveling on a main road, he sped into the neighboring town. The pursuing officer had radioed ahead, and it became clear that he wasn’t going any farther. Undeterred, he made a U-turn and sped back toward the first town.

Once again, radio communication was in play and this man entered the original town with two police cars following him and two more waiting for him. The suspect tried to drive past the two waiting police cars, but ran into a ditch and flipped his car on its side. Time to pack it in?

Yep, the officer with the dog.

That man has one seriously messed up adrenal medulla:

“The suspect was apprehended and taken to a nearby hospital for treatment.”

I’m guessing the dog was treated to a steak dinner.

It snowed this weekend. Since I don’t have photos of our suspects, I’ve given you some or our usual suspects.

It starts with shoveling a path. 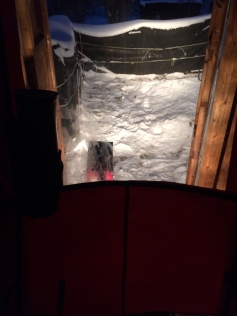 I had to start pretty early. Headlight and hot coffee.

This won’t take too long.

This was after I was done snow blowing the driveway.

This ball is fun in the snow, but lots of places for Maddie to hold on. 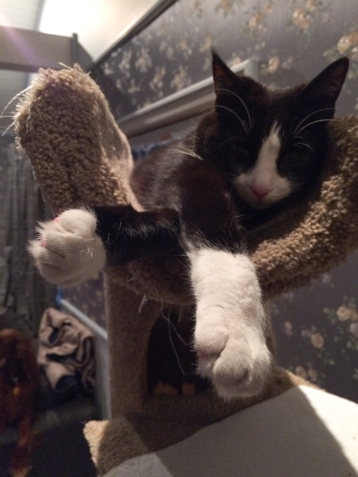 MiMi resting by the fire.

Not bothered by the snow. 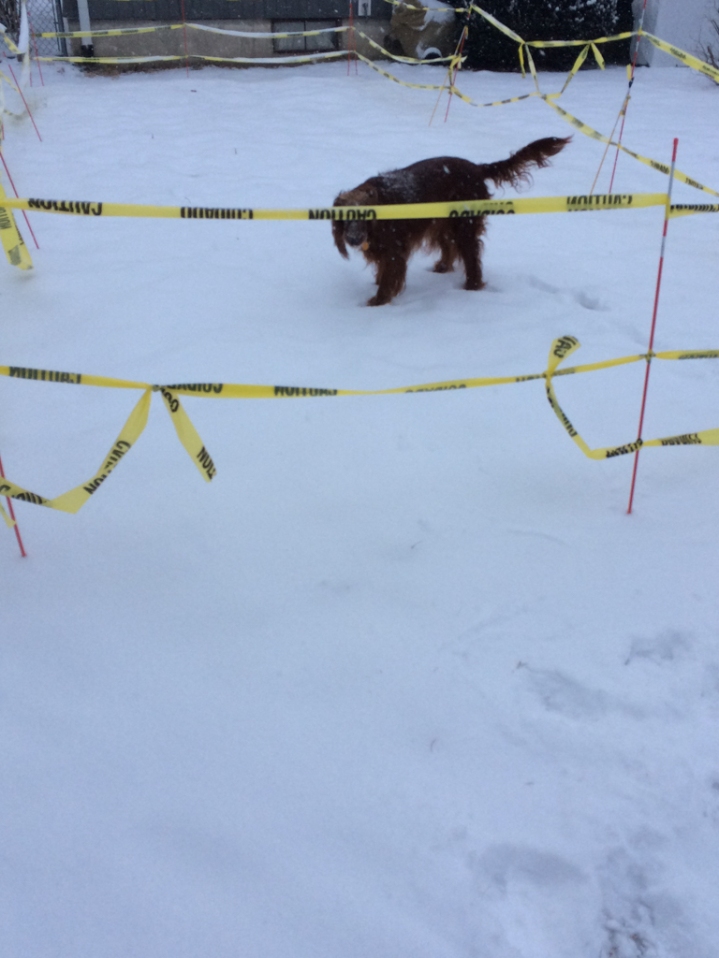 This should give you an idea of how well my “fence” idea worked.

And, if you want to watch the little redhead in action, here you go: