Almost exactly two years ago, I wrote about an occurrence of the Baader-Meinhof effect. A couple of months later, I wrote about some other interesting things that I wanted to categorize under the heading of a phenomenon, but I was struggling to find a name. Then, last summer, Baader-Meinhof, or something very similar popped back into my world. Perhaps not a real occurrence, but one of those weird things that happens and you don’t know whether to just shake your head, or if it’s something you should wonder about. If you haven’t guessed, this has happened again.

When we were visiting Pittsburgh in November, our daughter and I walked along the Allegheny river waterfront on our way to the Strip District. We crossed the Robert Clemente Bridge, walked under the Andy Warhol Bridge and also walked under the “other sister” the one I never remember.

You know that feeling when you know you know something but you can’t remember it. It nags at you, and you know that as soon as you stop thinking about it, you’ll remember it. A few blocks after my daughter asked “what bridge is that?” and I sighed and stuttered “some famous woman” it came to me: “Rachel, it’s the Rachel Somebody Bridge” – A few more steps and the whole memory shook itself loose of the cobwebs. It’s the Rachel Carson Bridge a.k.a. the 9th Street bridge, a.k.a. the third sister but the only sister who’s named after a woman.

“I think she was an author.”

Technically, I wasn’t wrong; she was an author. She was also a scientist who’s credited with advancing the global environmental movement. That had to be no small task in Pittsburgh in the 1950s when powerful industrial forces would probably have preferred to continue to have Pittsburgh be known by its nickname “Hell with the lid off”.

Actually, Rachel worked more to fight the widespread use of pesticides, and her book “Silent Spring” ultimately led to a nationwide ban on DDT as well as other chemicals.

So, how is this related to that pesky Baader-Meihof Phenomenon? Well, in case you weren’t here two years ago:

“Baader-Meinhof is the phenomenon where one happens upon some obscure piece of information–often an unfamiliar word or name–and soon afterwards encounters the same subject again, often repeatedly.”

I returned from Pittsburgh with Rachel Carson, author, firmly planted in my active memory. Then, I began to see ads for a documentary on PBS which premiers this month. (It’s on tomorrow night). It was while watching that ad that I realized that she was more scientist and activist than author. When I searched for her, I discovered that PBS had aired an earlier special by Bill Moyers in 2007. The truly weird part was when, early last week, a friend on Twitter posted a link to a book, “Always, Rachel” about the letters between Rachel Carson and Dorothy Freeman. The book isn’t new; it was published in 1995.

I knew about the book Silent Spring, but I was 8 years old when it was published. I remember the ban on DDT, the Clean Water Act and the Clean Air Act, and I remember many people in Pittsburgh complaining that those laws would ultimately cause the city to lose many good jobs.

I also remember wading in the waters of Lake Erie when you had to brush through pods of dead fish in order to get to “cleaner” water to swim in. And, I remember my brother coming home from an afternoon of water skiing on the Monongahela River and being able to pull his cut-off blue jean shorts apart with his fingertips after a cycle in the washing machine.

As for the bridges, I’ve always loved the Three Sisters because of their unique design. I didn’t know about their “new” names until I visited the city in 2009. The 6th St bridge was renamed on August 6, 1998, as part of a compromise after the Pirates sold the naming rights to what became PNC Park. There had been a large movement to name the park after Roberto Clemente.

The 7th St bridge was renamed for Andy Warhol on March 18, 2005, as part of a tenth anniversary celebration for the nearby Andy Warhol Museum.

I’m not sure why these coincidental encounters with Rachel are occurring. Maybe it’s just a good time to remember how important women are. I am proud of the contributions she made, and even though it took a lot of lobbying, I am proud of my hometown for honoring such an important woman of science.

I hope to watch the PBS Special. I also hope to read “Silent Spring.” Of course, from my earlier encounter with Badder-Meinhof, I still hope read “The Mystery of Edwin Drood.”

Note: Not only does my lovely editor own a copy of The Mystery of Edwin Drood, she owns a couple Rachel Carson books and was surprised by my ignorance on the subject of this remarkable woman. Sorry about the photo overload, but I like them all and my battery is dying.

Love-locks on the Roberto Clemente Bridge

From one of the books my wife owns

Two of the Rachel Carson’s books my wife owns

The Three Sisters, Rachel is in the foreground.

The Three Sisters, Rachel is in the foreground.

Stares up to Roberto Clemente Bridge

Roberto Clemente Bridge, from under And Warhol Bridge with PNC Park in background 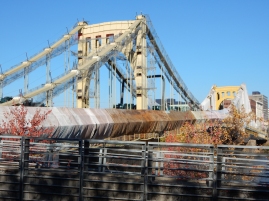 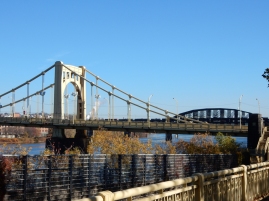 Walking to the game. The Roberto Clemente bridge is closed to traffic about 2 hours before the game starts

Roberto Clemente Bridge on the way home from a Penguins game 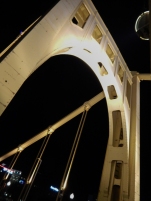 85 thoughts on “Rachel Somebody”