Apparently, I will never be completely done with posts about crazy drivers, dangerous drivers, self-appointed-important drivers and the more common clueless drivers among us. I could be done if I had to make up these stories, but these often fall into the “you can’t make this stuff up” category. Today’s stories, and accompanying diagrams, fall into the “if you made up that story, no one would believe you” category. If these things weren’t true, they would surely be bad fiction.

In case you haven’t guessed, as the title implies, today’s stories required two drivers or at least two people, working in an intellectual bar-lowering exercise. Not only can you not make this stuff up, you can’t even do it by yourself.  Please note: these events did not occur on the same day, but they did occur on the same road, over the course of about 7-10 days.

One: As I was coming to work last Wednesday, I was following a school bus. I was already a little late, which is to say I was less than an hour early, for work, having cleared the snow from my driveway, and ending up behind the school bus was an extra bit of frustration.

You should understand, that I am no longer bothered by the fact that the school buses stop at houses at which the child has not yet come outside. I could play the grumpy-old-man card and remind you that my father let me and my friends wait inside, but someone had to be at the door, watching for the school bus, and “don’t anyone be inside when that bus arrives.” That man was on a schedule and God forbid that you should alter that schedule. I’m willing to assume that schedules now allow for children to meander to the bus, after it arrives.

I crossed the “ok, now I’m frustrated” line when, not only was the child still inside, but no one in the house had shoveled the steps:

Two: A little farther south, the road takes on an interesting configuration. Two left turn lanes are carved out of the now four-lane road, but both left-turn lanes are taken from one side. Southbound traffic retains two southbound lanes and steals one northbound lane for turning left into Dunkin Donuts. Well, it’s a plaza, but Dunkin Donuts. Northbound traffic in the left lane must turn left at this intersection.

Except for our Furd*.

Furd decided that the person in front of me had failed in his duty to continue driving through the intersection once the light had turned yellow. Furd drove around me on the left in an attempt to go around both me and the guy in front of me, but had an “oh sh*t” moment when, opposite him, at the intersection, waiting to turn left into Dunkin Donuts was a cop. In addition, two cars were exiting Dunkin Donuts, turning right on the street ahead of us.

This left Furd in the intersection, under a red light, face to face with a police cruiser. Furd weaved left and proceeded to drive the wrong way in one of the southbound lanes, re-entering the northbound lanes behind the cop.

The light turned green and the cop turned into Dunkin Donuts. 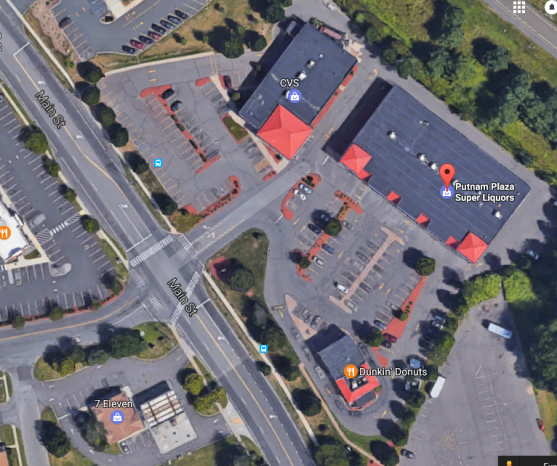 This is the intersection 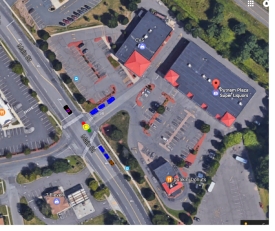 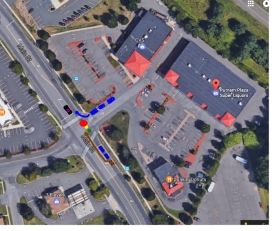 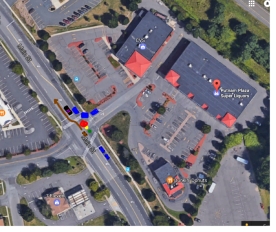 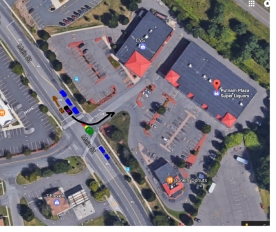 “I could arrest him, but I need coffee.” 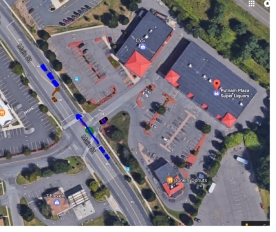 Three: My third story takes place about ¼ mile south of this same intersection, at a point in the road where there are two lanes going in each direction. A tractor trailer in the right lane put on his left turn signal. “This vehicle makes wide turns” and it was about to make one.

Except, there was nowhere to turn.

The truck driver was attempting to make a U-turn. Maybe his GPS said “make a U-turn.” My GPS does that all the time.

Tex* who was behind me and two other cars behind the truck, decided that his mission was too important, so he pulled into the left lane and sped toward the truck.

In addition to the truck and Tex, two cars had pulled up behind Tex. I was pretty sure we were going to have to pry a cop out of Dunkin Donuts to clear this mess, but after a flurry of expletive-laden instructions from the truck driver, people backed themselves up to let him make his ill-fated U-turn. In one last effort by Karma (to show she has a sense of humor), Tex found himself in the left turn only lane at the intersection with half-a-dozen cars in the right lane who wouldn’t let him merge.

This is the intersection 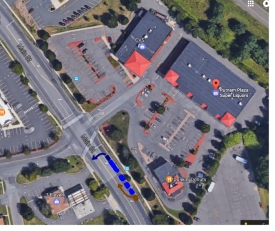 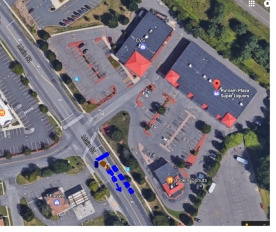 Lots of people have to move 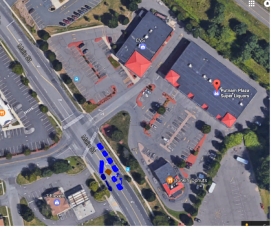 The truck was finally able to make the turn 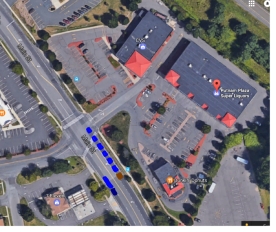 Yes, back where you should be

* I’m borrowing names from John Howell today. Where’s Tiny* when we need him? 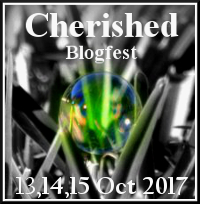