I’ve been fairly transparent here on No Facilities that I am an IT (eye-tea) guy. I manage the department that buys, configures, installs and develops and supports software for our company’s servers, computers, iPhones, iPads and phones.

Yes, phones. As in Voice Mail. Yes, I’m the guy, well, historically, I have been the guy who programs our company voice mail system.

It almost makes you want to buy our insurance, doesn’t it?

Why am I telling you this?

I received an automated call from “piggy boats” seeking payment of an overdue invoice. Piggy Boats isn’t a real company, but it’s how our voice mail system’s ‘Speech-to-text’ option interpreted the name of the real company that left the message. I’ll keep their name out of this, except to say that they make postage machines. I don’t need to use their real name. As far as I’m concerned, they are Piggy Boats from this day forward.

Piggy Boats sent us an invoice for $96. We didn’t know what the invoice was for. After crawling through their 100% non-human voice mail system, I hung up and sent an email to the woman who negotiated the lease for the postage machine. The cost was for insurance.

“Yes, insurance. If your building is destroyed by fire, we need to know that our postage meter will be covered by insurance.”

“$96 a month? According to the commercials on ESPN, I can get $50,000 of term life insurance for less than that. Besides, we have insurance on everything in our office.”

I sent my Piggy Boats salesperson the name of our insurance company, the policy number and some other insurancy stuff. She verified the existence of the policy and told me that she would take care of the invoice.

Which is now overdue.

The voice mail I received from Piggy Boats included a phone number that I could call to pay our bill with a credit card. I called the number, with the hope of being able to correct or at the very least complain about this matter.

I tried saying: “Representative” “Operator,” and “Human effing being!” – “I don’t understand, please press ‘1’ for Billing.”

I pressed one for billing, which is how I know I can pay an invoice or get a copy of an invoice, but not speak to a human being. Not even an unhelpful human being in a far-away land.

I could make our voice mail system impenetrable. I know how. I could program it to sit silent when you ask for an operator. I could reroute you to the main menu. I could hang up on you if you say: “operator” “representative” or “human effing being!”

Instead, we pay a small amount of money, less than the amount that term-life policy would cost, to have some nice human beings in Florida answer your call.

To all my fellow voice mail people: “There should always be an option to let your money-paying customers speak to a human being!”

I emailed my salesperson, the one who’s going to regret talking me into leasing this machine, and I dropped this mess into her lap. Maybe she can find a human being.

For the record, my use of the term “Piggy Boats” is in no way meant to offend, insult, or cause any upset to piggies, or boats. As the gallery shows, I like both piggies and boats. 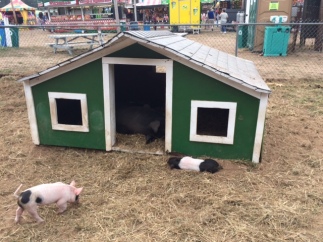 Pigs at the 4-Town Fair

A conference activity was sailing around St Augustine 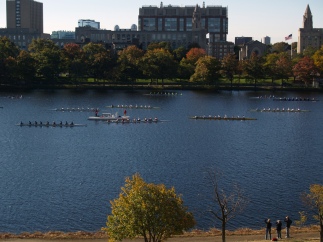 Head of Charles River Regatta. From my hotel room 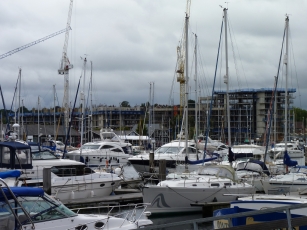 While visiting David in Ipswich

Rental boats on the Charles River

Two ships passing in the harbor entrance in Ft Lauderdale

We stopped to see a working water-powered flour mill and spied this boat.

This boat was built in the ’30s, lost in a storm, salvaged and restored.

That’s the fountain at Point State Park in the background. In the foreground is one of the boats in the Gateway Clipped Fleet shuttling fans to Heinz Field