Breaking the Rules of Good Blogging?

If we were having a beer, you would be trying to talk me into paying, again.

“I think you should pay for our drinks today.”

“No, it’s not that, I have some advice for you. Some things that will make your blog better.”

“Really? Since when did you become an expert?”

“I haven’t, but I read someone else’s that listed some rules for successful blogs, and I think you’re breaking them.”

“Dan? Breaking the rules? That doesn’t sound like him. He’s pretty dependable. For instance, I’m guessing he’s going to have a Yuengling, now that we have it in bottles.”

“I’ll even pour it in a frosted glass.”

“What about you? You’re not so predictable.”

“Oh, I think he’s having wine today, Cheryl. We haven’t decided who’s paying yet, so I don’t think he’s going for Bourbon.”

“Wrong, my young friend. I will have a glass of Woodford Reserve, on the rocks.”

“I’m surprised, you usually only have that when I’m buying. Which, I’m not.”

“You haven’t heard my advice yet.”

“We’ll see. Let’s start with the basics, do you self-host your blog?”

“Do you even know what that means?”

“No, but apparently, you should self-host. I checked. Several people say so.”

“I don’t self-host, it’s a pain. Also, a lot of the self-hosted blogs I follow, are slow to load. The speed depends on the hosting company.”

“So, why don’t you spend some money and hook up with a fast provider?”

“You have to manage plug-ins, upgrades, security…it’s too much bother for not much benefit. What else you got?”

“Well, I hesitate to bring up the next one.”

“I know you’re breaking it, but I’m not sure I want you to stop. They say you should post every day.”

“Because if he spends too much time tending to that blog, he won’t have time to come here. Here’s your beer, and here’s that Bourbon.”

“I understand. But, this next one seems important, and it also seems like you ignore it.”

“Oh my, it’s a wonder I have any followers at all. What now?”

“Several places say you should establish a niche, and then cater to your audience. You don’t do that.”

“You’re right, I don’t. Unless you consider ‘random’ a niche.”

“Hang on. Cheryl, what are the specials today?”

“Look, suppose someone stumbles onto your blog on a day when you’ve managed to write something funny. They decide to come back, and you’re preaching about women’s rights or something. How are they going to feel?”

“I like to think that, if I tell a good story, they’ll stick with me.”

“You don’t want to focus on one thing and grow that?”

“I had two technical blogs before starting No Facilities. Writing about the same thing gets old.”

“Um, you know what else gets old?”

“Uh oh, Cheryl, have we been neglecting you?”

“You’ve been neglecting your drinks, and the menu. Lately, you guys sit and yack like you’re in the park watching the birds.”

“I think we’re ready for another round.”

“So, does that mean you aren’t paying today?”

“Not only that, I’m going to order some wings.”

Now, about those birds in the park…

Those nests were mostly built by squirrels

We feed them a little more often when the ground is covered.

Snoopy has been visiting us lately. I don’t think she’s building inside yet.

This guy found something to eat 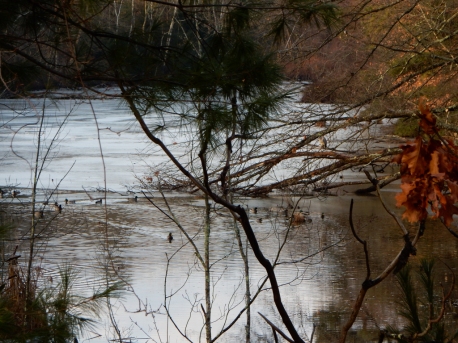 Finding some clear water on a frozen pond 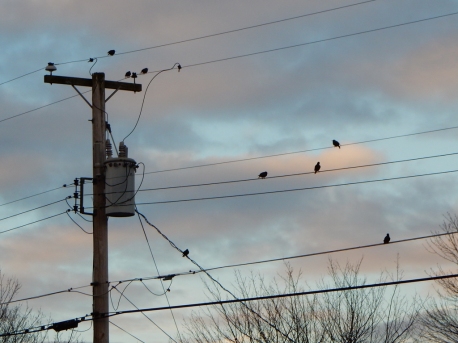 It looks like it’s going to be a good day

These guys manage to build a nest where two gutters meet. I don’t like the idea, but… 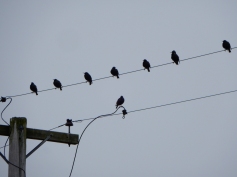 We lost a few of these guys to the hawk, but there are still some hanging around