The Over-Exposed Power of Turnips

The title might not mean much to you, but it saved you from a recap of the conference I attended last week. I was going to try to wrap a story around Intelligent Information, or perhaps intelligent information managers – a group in which I hope to be counted. Still, this isn’t a technical blog – been there, done that – so I should spare you the talk about the AIIM Conference and information management.

I was going to go that route because the snow storm which forced me home ahead of schedule also forced me to change the schedule of my blog posts. I had a post written and scheduled for today. It was to be published as I was traveling home from Iowa. I was going to complete the illustrations while I was in Iowa. Which I wasn’t, so I didn’t, so…the AIIM Conference. I figured you guys could handle one work-ish-related post. But, you were saved by Ellen, Teagan and Janet.

How’s that? You ask.

The title, remember the title?

Maybe this would make more sense if I told you that the title was going to be “Unintentional Inspiration.” Unintentional, because if you read those three blog posts, I don’t think the lovely ladies were trying to inspire. I might be wrong. Ellen may be trying to urge us to activism, you never can tell with her.

I’m sure you understand the way blog posts that we read often inspire us to write a similar/opposing/supporting blog post of our own. When I see a post like that, one of three things happens:

2) I add the link to a note in Evernote so I can come back to the subject in the future.

3) Options one and two seem like oh so much work, and I just reblog the original post.

I read Ellen’s post on Friday. I didn’t want to rattle off another in-response-to-Ellen post on Saturday, lest you think that that’s all I know how to do these days. Read Ellen, respond to Ellen. Teagan’s story arrived on Saturday and I added it to the list. I normally wait until I have three items to write about, so that list could stew for a while. Then, on Sunday, Janet posted, and the list was complete.

Ellen told a humorous story about being arrested in New York, and in our comment discussion, we talked about an issue that has always held my attention – the way that people with small amounts of power abuse that power when dealing with others. Since I had just returned from a trip, I had a fresh example.

Airports are steaming with power. Uniforms, weapons, body-scanners and people who give instructions. Do you notice how some people give instructions to politely inform and some give them to convey the notion that: “this is my domain and this is how you will act”?

“Flight ### to New York is NOT open yet. We will open the flight an hour before departure and we will answer your questions at that time.”

Each time more terse. Each time, an embarrassed person returned to their seat and the attendant returned to pecking away at her phone. 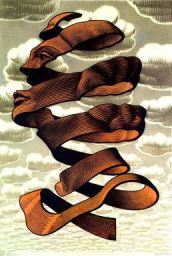 Teagan’s inspiration was much more personal and clearly unintended because, well, because I don’t know how she could have known what I think about turnips. ‘Turnips’ was one of the three things in Teagan’s story.

Note: If you’re not familiar with Teagan’s serial stories, you really should take a look.

Anyway, Teagan wrote about turnips and it reminded me of my dad. My dad loved to eat raw turnips, and I followed the way a child often follows a parent. We used to have a game. We would each get a turnip and start peeling it with a pocket/paring knife. The objective of the game was to peel the turnip in one long strip – like that really cool M.C. Escher drawing. I thought of that while reading Teagan’s story, and it made me smile. I like to remember the things that make me smile.

Janet completed the trifecta – three unintentional inspirations in three days – by posting an over-exposed photo of a china pot for Cee’s Oddball Photo Challenge. It made me think of the photo below:

That’s the Javits Center in New York. I had been trying to learn how to use the manual settings on my camera, but I had forgotten to put it back on ‘Auto’ before snapping that shot. As Janet says in her post, “I like it.” The gallery includes some of my other photos of the Javits Center – I’m fascinated with the building.

Thanks for the inspiration ladies! 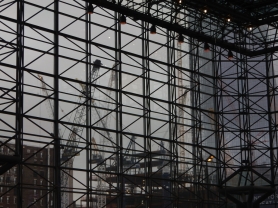 Cranes outside the Javits 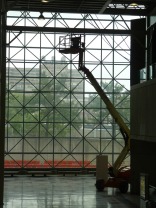 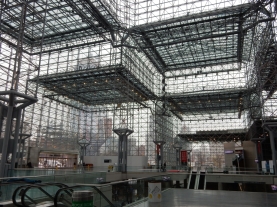 Looking up into the main lobby 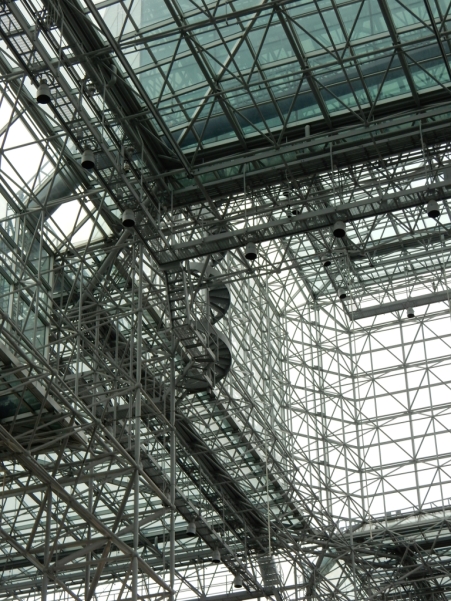 I would love to climb up there. 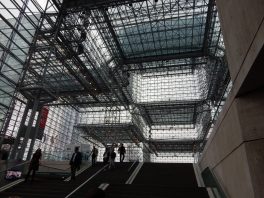 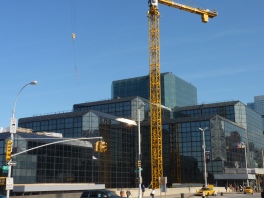 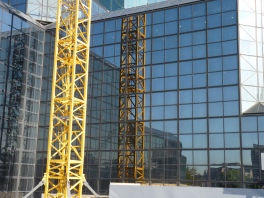 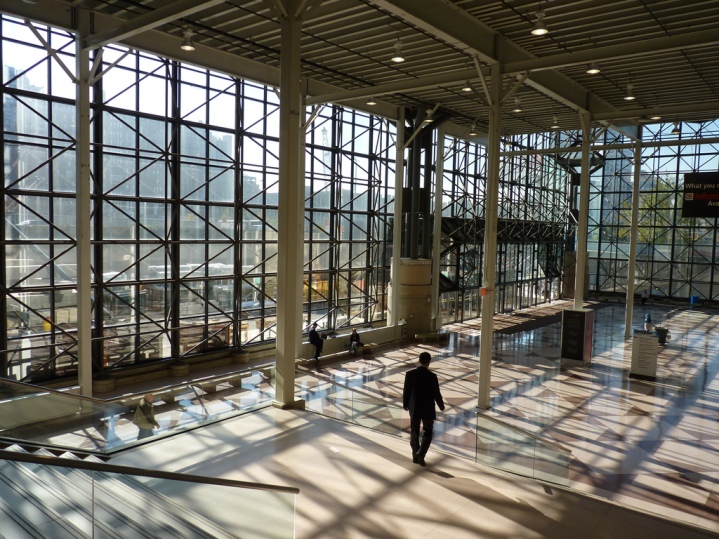 I attend a lot of conferences in the Javits Center in New York and I never leave without snapping a few photos of the glass and grid.