Since Windsor is arguably Connecticut’s first town, it should come as no surprise that it contains an abundance of historic buildings. Few, if any date back to the 17th century, when the town was founded, but since they were here first, they expanded earlier than other towns. As the population grew, the town needed a Town Hall, a Post Office, a Library, and all the things you would expect to find in a modern town. The Town Hall was torn down and replaced. The Post Office was given to the Veterans of Foreign Wars (VFW)  and a bit of the library was added onto to build the current library.

One, actually two, of the things Windsor needed early were firehouses. Firehouses from the late 19th and early 20th centuries were difficult structures to keep in operation. As fire apparatus grew in size and capability, fire departments eventually outgrew the buildings they called home. Fortunately, a lot of towns in Connecticut have kept their historic firehouses alive to serve other purposes. Maybe they house the parade truck. Maybe they’re used for storage. Maybe they became a bar.

Two of Windsor’s oldest firehouses have been repurposed. One as a financial services office and one as a restaurant. These two former stations are related, and share important roles in the rich and turbulent history of the Windsor Fire Department’s early days.

The first firehouse in the gallery is on Maple St. This was one of the first firehouses in town, but it almost wasn’t ever built. Like many of the fire departments in CT, Windsor’s firemen are mostly volunteers. You would think that with a volunteer brigade, the town would be more than willing to buy equipment, build firehouses and supply water, but that hasn’t always been the case. Early volunteers actually contributed to the purchase of equipment, and at least the land for the Maple St. firehouse was donated. I say ‘at least’ because one source says the land was donated and another says the building was donated as well.

The interesting thing is that, initially, the town rejected the gift. I’m not sure why, the facts are a little murky, but eventually, the land was donated, with the provision that it be used for a firehouse, and the town accepted. The building, according to the National Registry of Historic Places nomination form, is an:

“Example of a late 19th century village firehouse in handsome yet simple Victorian Italianate style. Building has a simple charm due to its small scale and fanciful detail. Note the relieving arches and the denticular cornice.  Both are examples of fine masonry craftsmanship of the period.”

That firehouse was active for about 40 years, when, in 1927 the town agreed to upgrade equipment and the vehicles they purchased would not fit. It was at that point that the Union St. Firehouse was built on the opposite side of the Town Green. The Union St. Firehouse was a nice two-story, two-bay affair and served the town until 1964 when it was replaced by a larger, more modern but not nearly as attractive building near the Public Safety Complex, a.k.a. Police Station.

The Maple St. Firehouse was sold to a private owner in 1939 and was eventually turned into offices for a small financial firm. The Union St. firehouse was turned into Union Street Tavern in 2004. We have eaten there several times. They have a nice bar, with a good selection of draft beer and they have pretty good food. There is some fire station memorabilia scattered about, but not so much that you’d call it a theme.

The oldest “fire station” in Windsor is no longer standing. Ironically, it burned down. Again, from the history pages:

“The volunteer fire company that served Windsor center was formed in 1830 by twenty men who each subscribed five dollars. Their early apparatus and a storage building were destroyed by a disastrous fire in 1869 that burned more than a dozen large buildings in the center of town.”

Since the firemen’s building was the first building to burn, they were unable to bring a serious effort to fighting the expanding blaze. 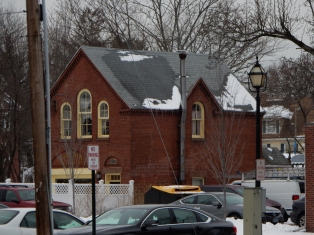 When you see a building like this in the distance, you just hope it has nice doors.

The picture window is a poor replacement for a firehouse door, but the building is pretty. 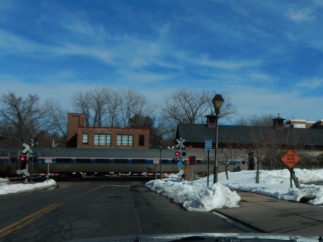 Stopped by this on my way to get photos. I never mind waiting for a train.

This gives you a sense of what the doors looked like.

Side door to Union St Tavern 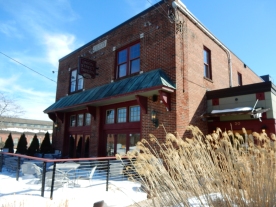 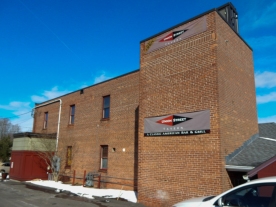 Union St Tavern. Not much to look at from the back. 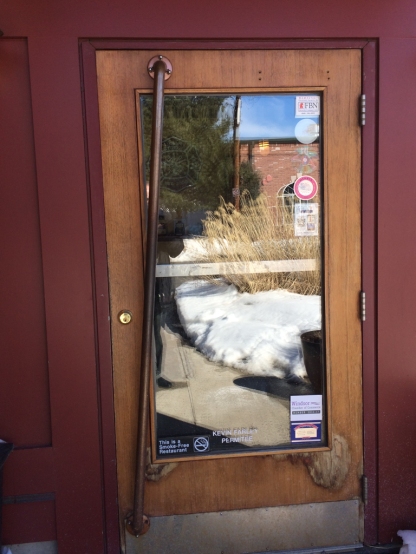 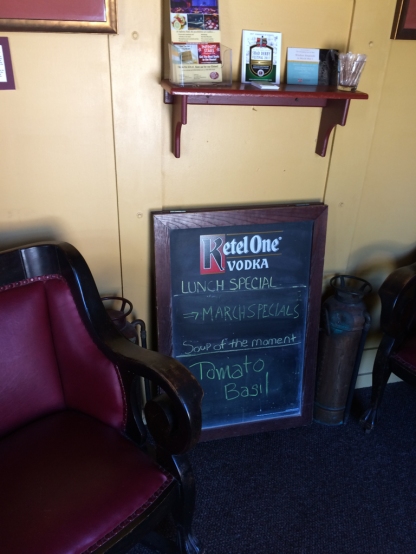 Inside the front door 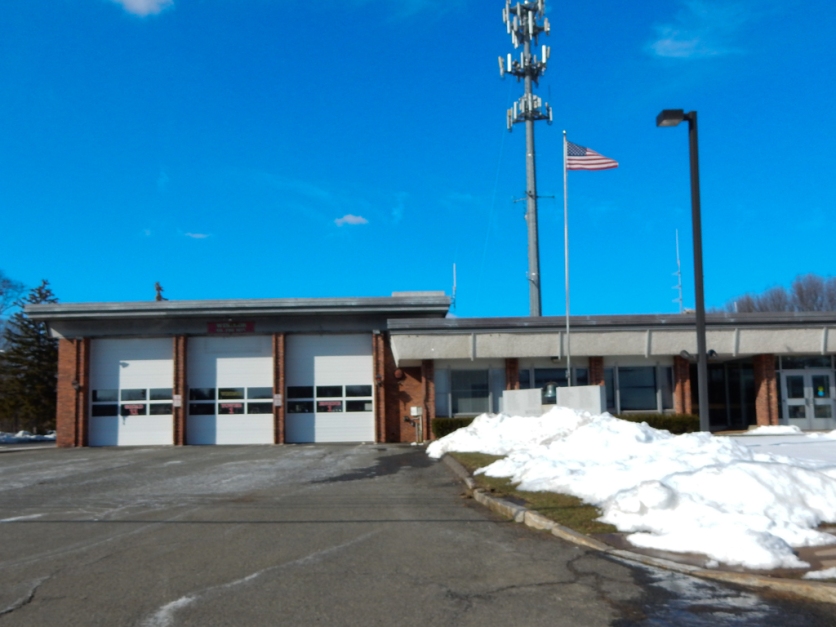 The new fire station is functional and convenient, but pretty boring if you ask me.

This post is part of the fun and interesting weekly series called Thursday Doors brought to all us wanna-be firemen by Chief Norm Frampton. If you want to participate, or if you just want to see a collection of doors from around the world, drive your fire engine up to Norm’s place. Check out his doors and then look for the blue frog. Click and off you go.