I always wonder if there’s a limit to how many blog posts you’re allowed to squeeze out of one experience. I guess if it’s a major life-changing experience, all penalties would be waived, but if you try to write for the 4th time about going apple picking, you might raise a few eyebrows. Unless you were picking apples on the Whitehouse lawn or outside of a shabby bar in Port Aransas, Texas.

I had taken some notes on my hastily-arranged flight from Florida to blizzardville, Connecticut, but I thought I had milked that bit of hectic travel dry. Then, Dan, the other Dan, the one who lives where it never blizzards, but who routinely travels half way around the world, wrote about flights.

Anyway, Dan has had his share of travel issues, which, when you’re collecting stamps on your Passport, I guess are to be expected. I’m merely experiencing the nuances of domestic travel under various conditions.

When I was trying to find a way to get home from Florida, I was competing with a lot of people. It was 5:00 Monday afternoon, and every flight into Hartford (BDL) on Monday night and Tuesday had already been cancelled. I was trying to fly on Wednesday. I found two possible flights. One through Atlanta that left around 5:00 pm, and landed around 9:30pm. When I first checked, that flight was a little over $250. The other flight, through Minneapolis (MSP) left at 2:30pm and arrived around midnight at a cost of $312.

I’ll spare you the details. Suffice it to say that in the 10 minutes during which I tried to coordinate my plans with my wife, the folks at the conference at which I was speaking, and the hotel in which I was staying, the $250 flight through Atlanta jumped to $669 and the flight through MSP rose to $410 and then sold out.

Then I noticed that there was one 1st class seat left on the flight through MSP, for $440. $440, minus $35 for my second bag (1st class luggage is free), would actually be cheaper than the original flight. Momma didn’t raise no fool, I upgraded myself to 1st class.

I haven’t flown in 1st class since my wife and I were on our honeymoon. I didn’t pay for that. That’s long story and I’ll save it for another day. I normally fly economy comfort, to get the extra legroom. I wasn’t the classic 1st class newbie, but I was unfamiliar with, or had forgotten a few things. This is how Dan got my attention. Dan mentioned a guy who was thrown off a Delta flight for having to pee while still on the tarmac. He doesn’t say if they returned to the gate, or just tossed him out, but Dan did go on to muse about the restroom situation:

I don’t know when they lock them, but those toilets are different. They are bigger. The one I used was big enough to almost get comfy in. It also had a hand lotion dispenser (no room for that in a coach bathroom) and a supply of toilet seat covers. You know, those paper things that keep your bottom from touching the same seat other bottoms touched, but require you to wad up and throw out. I once knew a guy who called those “ass-gaskets” – fairly apt. A few other observations from my five hours up with the pretty people:

Barring another emergency, I don’t think I’ll be paying for those privileges in the near future.

I’m still collecting pictures of spring stuff. I have pictures of the 1st class bathroom, but I think these are better.

Russian lilac. We planted these several years ago and they are blooming now.

This is small quince bush that rooted itself from a larger one.

Lilacs and Sand Cherries. On the perimeter walk with Maddie. 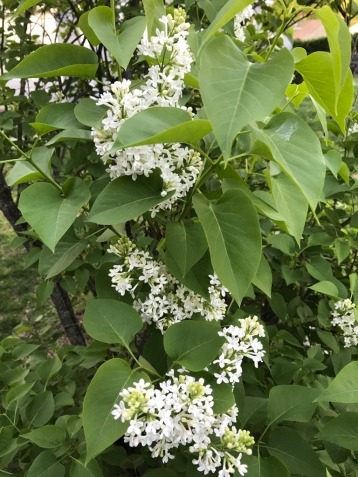 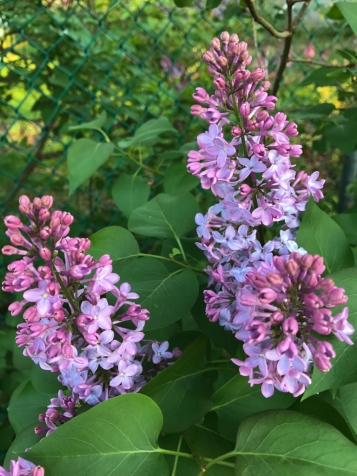 Lilacs are so pretty

I’m not sure what these are, but they are pretty. 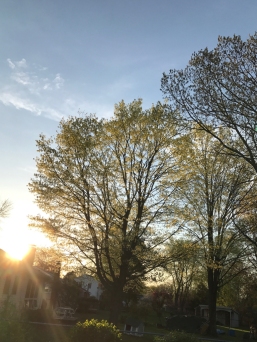 It’s getting harder and harder to get out before sunrise.

Sitting with Maddie on a stormy night 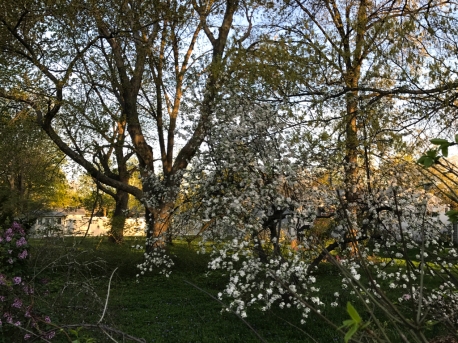 Neighbor’s tree caught as the sun is rising 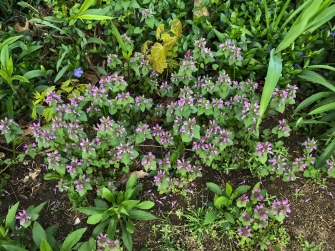 Lilacs, Dogwood and the neighbor’s crab apple tree all starting to bloom