If we were having a beer, the conversation starter would be obvious.

“Holy crap, what happened to you?”

“You fell? That’s like Bill Gates saying ‘I made some money in software’ what did you fall from, or into?”

“I fell at home, in the bathroom. The exact details are less than clear.”

“Yikes, Dan! What the heck happened?”

“I didn’t say that. I fell in our bathroom. I’m just a little sketchy on the details.”

“But, other than the obvious, you’re OK?”

“Yes, Cheryl. Thanks for asking.”

“OK then, for the critical detail. Are you on any medication that prevents you from drinking alcohol?”

“Good. Then I prescribe one Yuengling, administered orally, via frosted glass.”

“Add a glass of Meiomi to that order, and put it on my tab Cheryl.”

“…at which point you would have retracted the offer. I cut my head, I don’t have a concussion.”

“What were you doing in the bathroom before you fell?”

“Um, guys, let’s remember that people are trying to eat here. Maybe a light touch on the details is in order. Here are your drinks.”

“Agreed, here’s to good friends and a light touch.”

“You guys have a point. Can you tell me when it happened?”

“My wife did. After she helped me up, asked those annoying questions and helped me control the bleeding.”

“You know, ‘what day is it?’ ‘How old are you?’ ‘What’s your birthday?’ those things to see if you’re still thinking straight.”

“The police arrived first, followed in a few minutes by the ambulance.”

“He offered to help and then asked all those annoying questions.”

“Did you get to ride in the ambulance? I mean, did they take you to the hospital?”

“They took me to St. Francis.”

“Lights and sirens the whole way?”

“Yeah, but I got to ride the stretcher down our ramp.”

“Wow! That must have been quite a thrill.”

“It was! I heard one of the paramedics comment about how smooth it was. I built that ramp, that’s quite a compliment.”

“I’m happy for you. How long were you at the hospital?”

“You watch too much television.”

“ER is on in syndication.”

“Wow, in two months, you’ve had an MRI of your head and a CAT scan. I guess that proves there’s something in there.”

“I came to ask if you boys planning on eating, but I need to know, are you going to stick with ‘Dan’ or switch to Scarface?”

“I’ll stick with Dan. The doctor promised a minimal scar, if I get these out within five days.”

“Come on, I’ve had stitches, they aren’t magic.”

“I just have to give it some time.”

“About a year. Cheryl, how about putting an order of 20 wings on his tab?”

“I can do that, but are you sure you want to look at napkins covered in barbeque sauce?”

The gallery includes some June leftovers from the Solstice and the high water at Great River Park. And, if you’re not too squeamish, there’s a shot of the new look I’m sporting. I kept it small, but you can click on it or any photo to start a slide show.

From the park, looking up the levy at the rising sun. 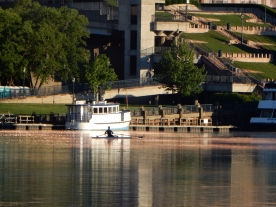 ♫ Row row row you boat, gently down the stream… 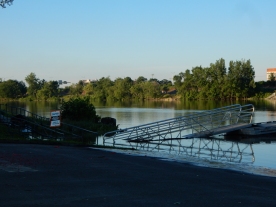 That’s not the sunrise reflection, but the sun burning through clouds. 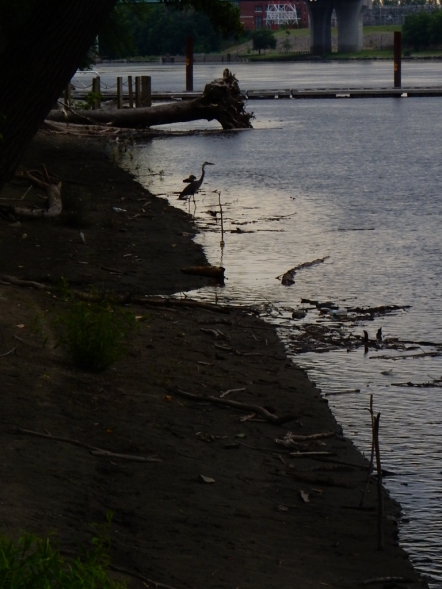 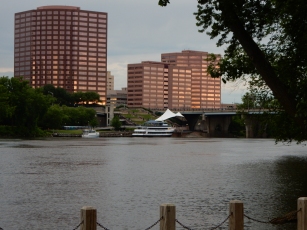 The CT River is running high after some heavy rain. That’s not the sunrise reflection, but the sun burning through clouds. 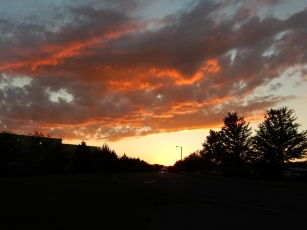 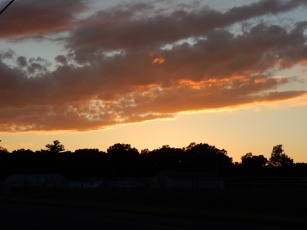 “Hey! That’s where I wasn’t sitting” Maddie stole my place on the couch while I was getting some coffee.