I wanted to talk about Sears (yes, again) because the closing of our local Sears store has hit me hard. The prospect of Sears not surviving hit me even harder. Still, I wasn’t going to tell the story, because I’ve talked about Sears before and I don’t remember what all I’ve said. Then Greg at Almost Iowa jogged my memory. I was about to make a snarky comment about that probably being the only jogging he does, but I don’t know him that well, so…oops. Anyway, I added a comment to that post that Ikea, his post was about Ikea, doesn’t have a tool department so you can’t hide there like you ustacould at Sears…before they closed.

I used to wait in Sears when we shopped as a family and my wife and daughter needed to go somewhere and try stuff on. We would have parked outside of Sears, the entrance to the tool department, so when they were done, we were done. One time, before my daughter had her driver’s license, I was roped into driving offered to drive her and three friends to the large Mall in not-so-nearby Holyoke, MA. I told them I’d drive, but I wouldn’t drop them off and return later – I wasn’t interested in making two 90 minute round trips. Faith was worried that they might run into me. I said: “just stay out of Sears.”

Entering through Sears and staying close to Sears is a family tradition. There’s a funny story about my dad and Sears that I thought would be good summertime reading. I thought I had written about this before, so I checked – that’s the kind of transparent blog-guy I am. I’m not trying to pass off a bunch of summer reruns for new stuff.

Uh-oh. I may have just dated myself. How many of you remember summer reruns? How many of you remember that, if you missed an episode of your favorite show during the season, that summer reruns were your one last chance to see it. Back then, we didn’t have VCR, DVR, Internet, YouTube, etc. etc. It’s why we said things like “they’re the best thing since sliced bread, or bottled beer” when they started showing reruns. There were people alive when I was a kid who remembered a time before sliced bread.

Bottled beer had been around a lot longer than sliced bread, but the impact had staying power. Lots of stuff was invented between bottle beer and sliced bread (steam engine, camera obscura, typewriter, telegraph, sewing machine, etc…) but we’re still left with those two milestones.

Among the things we didn’t know back then was the fact that old TV series would eventually go in to syndication. Lots of people didn’t know that. In fact, Dawn Wells, the woman who played Mary Ann on Gilligan’s Island was the only cast member to ask for a slice of the syndication revenue. She and Sherwood Schwartz were the only two members of the show that made money in syndication (Schwartz made about $90 million).

Wow – I took a wrong turn somewhere. Oh yeah, with the reruns.

Anyway, the story starts when Sears agreed to join Nordstrom-like Joseph Horne’s and Gimble’s to anchor South Hills Village, the first major shopping mall in our area of Pittsburgh. Prior to that store, interacting with Sears was mostly a catalog process for us. Joseph Horne’s, Gimbles and Macy’s-like Kaufman’s all had downtown stores, I don’t remember where the closest Sears was. My dad didn’t care, he wasn’t much of a shopper. Mom was.

One day, Dad burned up the saw blade on his table saw. He decided to go to Sears to buy one. He asked my mom if she wanted to go to South Hill’s Village. Mom was thrilled. That mall had 102 stores!

We hopped in the car, and drove to the mall. Of course, we parked near Sears. The entrance led to the Hardware and Paint departments. We stepped inside, dad bought a saw blade, and we left.

We never entered the mall.

When I wanted to see if I had told this particular Sears story before. I checked, and I found this old one. I really like it. You can read it if you like.

Not much in the gallery today. A few photos from around the house, from which I wasn’t going very far.

MiMi is a little cat, but she sure knows how to block the stairs. 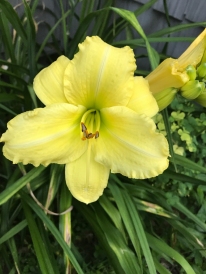 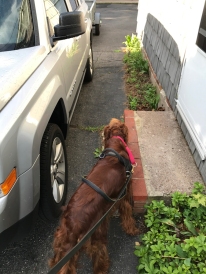 “Come on, you can squeeze through there.” Things you don’t say to a woman, even a dog.