I spent a lot of time in the shop this weekend, so not a lot of time for writing, unless I tell you about that work. I’ll try not to do this too often, but you know what they say about Mondays…can’t trust that day. One of the projects I am working on is the doors that allow access to the storage space in the attic of the garage. If you’ve been following my Thursday Doors posts for a while, you may remember a post about attic access doors. We like the look of those doors, and they work really well, so we decided to replicate them on the garage.

Of course, the previous doors are inside the comfort and security of our home. The new set will be exposed to the weather, and creatures curious and nefarious. Weather-proofing will be accomplished with a PVC skin. Security remains a mystery for now. I hope to avoid having to set up a ladder to unlock the doors.

As you can imagine, I’m going to wait until the doors are completed, maybe until they’re installed, before featuring them. Today, I just want to show some photos of the initial construction and give all those people who hate it when I get mathy, a chance to giggle at my expense.

The initial plan for these doors was to match the style and shape of the interior set. The doors were going to have to be shorter and sit lower on the wall than the existing doors, because I want to add a small overhang to the gable end of the garage. We didn’t think that would be a problem. Then, I noticed the upper doors on the barn in Georgetown, MA that was included in last week’s Thursday Doors post. I like that shape, the editor likes the shape and it would allow us to make the doors almost as tall as they are now.

My first task was to determine the angle of the roof. I won’t go into all the measuring and calculating involved, suffice it to say, it’s 31-and-a-few-pieces-parts degrees, which is convenient because my power miter box (Word wanted to change that to ‘litterbox’ – who has been using this laptop…MiMi?) has a preset ‘detent’ at 31.6°. A ‘detent’ for those unaware, means that the saw clicks into a stop that is at exactly 31.6°. That detent is used for cutting Crown Molding, but what the hey?

This is why you always make a mock-up!

I made a better mock-up. More measurements were mathed. Actual boards were cut at the proper angles. Jigs were made to hold things in place. Cleats were screwed to the table to keep everything in line. Clamps were used to hold everything in place. By the way, if you ever need to buy a gift for a woodworker, you can NEVER have too many clamps.

The threshold needs to extend beyond the siding so that water falling/running onto the threshold doesn’t get behind the siding. The threshold is cut from a piece of 1” composite decking. The bottom of the door jamb is cut at a 10° angle so that water will run away from the door. 10° seems to be the angle Noah used on the main entrance door to the ark. It’s been forever.

The gallery has a few of the woodworking photos and a few of the standard weekend fare from around this place. I hope you all have a great week! The song hinted at above is under the gallery, just in case you need it.

“I’ll just lay here and keep an eye on that bunny.” 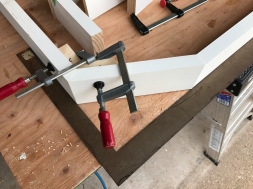 It’s the 90° between the side and the top that I have to check.

I was happy to see this setting until I realized that I can’t use it.

That’s a lot better. I’ll save the mock-up since I have to cut trim and backer boards.

The joints are held together with glue, screws and biscuits. Biscuits are little oval plates that fit into slots that are cut by this little machine. 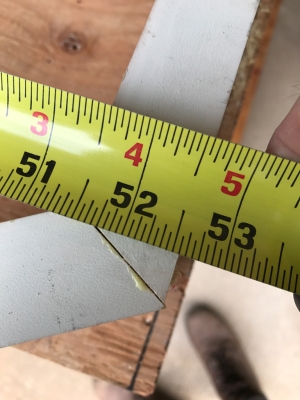 The Rose of Sharon is blooming and it’s something to look at while out with Maddie.

Complete jamb and threshold, ready to be tested on the wall.

We are lowering the height of the threshold by about 4½” – I think it’s going to look good.

That looks big enough to get most of the stuff in the attic in and out.