…near the one and the little hand is on the six. That’s how I learned how to tell time. My dad would ask me to go check the time and I would report back. He would then quiz me as to proper way to tell him the time. By the way, that was “it’s about five after six.” He didn’t need the extra 0-59 seconds’ worth of precision.

And neither do I.

I don’t own a digital watch. I don’t use my smart phone as a watch. I, that is my editor, uses it as a timer, because I’m supposed to lay on that foam roll for three minutes and she doesn’t like me estimating. Still, she could do the job with a watch that has a second hand. I have a digital alarm clock, but that’s because it was the option with the least annoying lighted dial. The most annoying lighted dial would be the one they advertise in the airline magazines and sell at Bed Bath & Beyond that projects the time onto the ceiling of your bedroom. I can’t imagine sleeping under the image of a clock – taunting me all night.

This post isn’t about watches and clocks. It isn’t about the stunning degree to which today’s children lack simple skills like telling time and writing their name. It isn’t about sump pumps, but it was inspired by Almost Iowa’s post “My Sump Pump” which arrived in my digital mailbox the same day as a flier from my local woodworking supply store arrived in my analog mailbox – you know, the one on the post, next to the porch.

The woodworking store’s flier was advertising a “smart drill press” that costs about $1,000 more than my dumb drill press that is the same capacity. I took note of the warranty “2-Year Full Replacement for Motor and Controller and 5-Year Full Replacement for all other parts.” My dumb drill press is almost 25 years old and it works fine. I can just imagine spending $1,400 on a drill press and having to spend another $1,000 in three years to replace the controller – a.k.a. the part that doesn’t rotate, move up and down, hold a drill bit or otherwise put holes in things.

The digital drill press has “Digital Quill Depth Readout.” For those of you unfamiliar with the anatomy a drill press, the quill is the part of the drill press that lets the drill bit go up and down. If you want a more accurate and less helpful definition, see below:

The digital readout is designed to help you control the depth of the hole you are drilling. For example, if you’re drilling a hole in the seat of a stool, in which you will insert the legs, you want the holes to stop below the surface and you want all the holes to be the same depth.

Ever since forever, depth on a drill press has been controlled by a rotational limit thingie. You run the bit down to where you want it to stop, set the limit-thingie and you’re done. If the hole you’re drilling isn’t deep enough, you adjust the depth limit a bit; you scootch it up or down. You nudge it one way or the other a tad, a touch, a smidgen. I don’t know what the decimal equivalent of a smidgen is. I barely know the decimal equivalent of a 1/16″ and that’s way bigger than a smidgen. That’s measurable. That’s actually on the dial of the rotational limit thingie.

The digital drill press has a “Dial Knob for Precise Speed Adjustment” – My drill press has 12-speeds. Changing speeds is accomplished by moving two belts that connect with three pulleys in a first-this-then-that arrangement that makes you remember math and geometry and physics all at the same time. The 12 speeds are discrete, not variable. Still, I rarely have a need for 1,137 rpm. Usually, if 1,200 is too fast, I’m good with 1,000.

The digital drill press has “Intelligent Speed Selection” that “Offers the Correct Speed for the Application.” I have the memories of shop teachers Mr. Wells and Mr. Paulsen telling me to “slow that damn thing down, you’re going to burn the bit” and threatening me with “or I’ll give you ten and a half where it will do the most good.” 10 ½ was Mr. Paulsen’s shoe size. I haven’t picked the wrong speed since 10th grade.

Digital controls on human operated machines is a fallout from the robotic workforce. Robots understand that a 0.06253125” deep hole is 0.05% deeper than a 1/16” deep hole. Maybe that’s a smidgen, I wouldn’t know. Since manufacturers have gotten so good at building digitally controlled machines, they are now selling them to humans.

As we move ahead to a time when more and more things are being done by robots, watch for the disappearance of things that are designed to be operated by humans. Hopefully, my drill press will still be working.

About the gallery. In addition to the requisite drill press photos, there are a couple of Maddie and one of the bunnies. There are also two videos that I made. They aren’t very good, but fortunately they aren’t very long – they illustrate the depth gauge thing on my drill press. 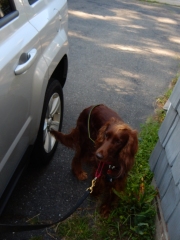 Legs for the stool. Those tenons at the top need a mortise to sit in.

The stool seat is pinned at an angle as I drill the mortises.

I could angle the table, but I usually angle the work piece.

With the depth gauge spinning free, this bit would travel through the table.

It’s really not that complicated. The belts are super easy to move and the chart shows all possibilities. 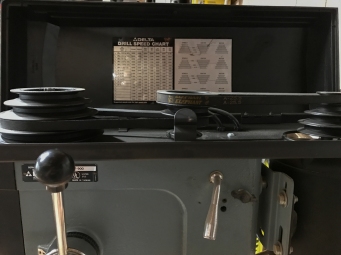 My wife was holding Maddie and I was sitting next to them. This guy kept getting closer to us. He’s about 10′ away. 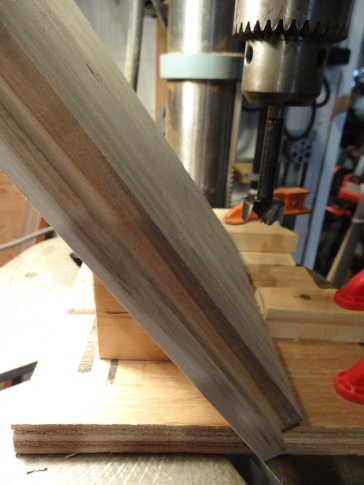 Drilling a stopped, wide hole will provide a finger pull for a slide-out shelf.