This is your idea of doing us a favor, giving us the prompt on a day you’re filling in for Linda? You think that somehow that lets you off the hook of: “don’t give this too much though.” We got news for you, you’re not often guilty of giving things too much thought. That’s just our observation from the corner of your brain that you tried to keep us tucked into.

What are you afraid of?

Lots of people listen to the voices in their head, and they aren’t all serial killers. See, you could have used serial/cereal as the prompt. Do you realize you had the entire SoCS universe in the palm of your hand and you went with do/dew/due. Anyway, listening to us has never gotten you into trouble. Okay, maybe it has, but not the kind of trouble you’ve gotten into with the so-called “professional” part of your brain. That’s the part that decided that telling your wife:

“you don’t even really look pregnant, you just look a little fat”

…was a good idea. Remember that? You thought that would make her feel better about her early pregnancy weight gain. Good job bozo. You could put that on one of John Howell’s top-10 things not to EVER do list. It’s a good thing Tiny isn’t some distant relative of hers.

Of course, you know us too well, and you know the temptation of bonus points is too hard for us to resist.

So, we’ve taken care of the ‘do’ part of doing the prompt, and we’re all set on ending with ‘due’ but ‘dew?’ – that’s hard. I guess we could refer to some dew-covered grass and flower photos, but in all honesty, that was fog, not dew. Do you know the difference? Well according to one source:

“To describe fog, one must be familiar with the term cloud. Cloud is a visible accumulation of tiny…”

Oh, my goodness, make it stop! That’s the kind of thing you would write! You lock us in the corner of your brain with the cobwebs, and go on for three or four paragraphs about atmospheric phenomena while most of your readers are looking for the “slap the author of this blog” button.

We know, we know, No Politics on No Facilities! Sheesh, you’re so up-tight. Remember up-tight? Yeah, from the 60s…kinda. It’s actually from the 30s but you wouldn’t know that.

No, it’s OK to talk about the origin of a word – that’s not a phenomenon – that’s a jazz term and by definition, jazz terms are OK.

Since we’re in the 60s, remember Mountain Dew? No, not the pop – hey, it’s your childhood, which means Pittsburgh, which means pop, not so-dah like they say up here in snooty New England.

We’re talking about Hee Haw. No, not Hoo-Ha – that’s entirely different – stop trying to get us in trouble. Hee Haw was the country music variety show you used to watch with your dad and grandmother. Remember Grandpa Jones? The old guy on Hew Haw. He played the banjo and sang “Good Old Mountain Dew” while jumping up and down like an 8-year-old (instead of 80-year-old). Go find a link for that on You Tube while we finish without you looking over our shoulder, and trying to make us bore your readers to death.

We miss variety shows. Variety shows were like the voices in the head of television. They were spontaneous, and less well thought-out than situation comedies and dramas. Variety shows were more of a stream-of-consciousness exercise than even the so-call “reality” shows we are stuck with today. Sure, they were written, planned, and rehearsed, but they were live and they were fun to watch. Hee Haw, The Carole Burnett Show, The Jackie Gleason Show, The Red Skelton Show – we could go on, but that’s where we learned to be wise guys.

Those guys always knew when it was time to go, and they all ended with a signature song, or statement: Hee Haw – “May your pleasures be many, your troubles be few…” Carole Burnett – “I’m so glad we had this time together…” Jackie Gleason – “Goodnight, everybody!” and Red Skelton – “God Bless and Good Night.”

What do we have?

We have bonus points and they are long overdue!

This post is part of Linda G. Hill’s Stream of Consciousness Saturday challenge. I filled in for Linda today, but the challenge emanates from there:

The gallery includes a few of those foggy shots and beneath that. Grandpa Jones is ready to entertain you. The video is only 2 minutes long and it’s super fun. 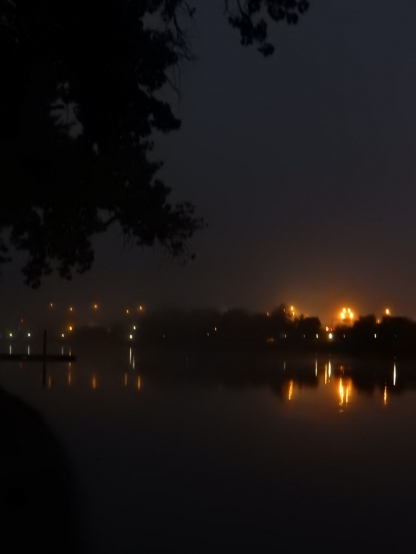 Ducks basking in the reflection of my favorite building.

The boat dock will be removed next week. They have to get the river ready for winter.

Do you see the ducks?

Starting out for work on a foggy day

The park was closed this day. This picture is from the road above the parking lot. 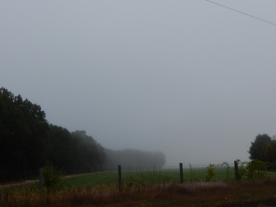 There’s almost 80 acres of tobacco field back there. 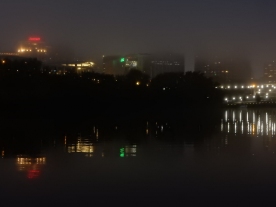 Our city is cloaked in fog.

There are some taller buildings than the one we can see here. the lights on the right are a bridge