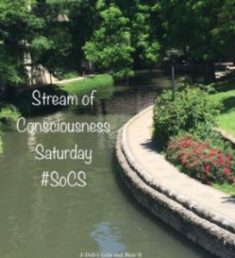 Maddie doesn’t approve of shortcuts when we walk. She’s suffers a little from OCDog. She has her routines, and she has her routes, and when we walk, we take one of two routes. Our “normal” walk is over to Veterans Park, into the park, around the ball fields, back up the walking path and then home. When it becomes necessary to cut short our walk, I tell Maddie “we’re going to take a short walk” and she alters to Plan-B.

Plan-B involves walking precisely to the driveway of the apartments for elderly residents. I used to call that the “old folks home” but I’ve long since passed the point where I would be eligible to live there. In fact, it used to be a school. Lots of towns in Connecticut made a huge mistake with respect to schools in the 70s. Southwest School was ours. Southwest school was built in 1954, the same year I was built. In the late 70s, Southwest School was one too many elementary schools in our town. Like other towns, we put it in mothballs.

Not literally in mothballs. You can’t actually pack a school in mothballs. I mean, I guess you could, but you’d need a few tons of mothballs. I don’t know why, probably the influence of the voices in my head that I’ve unchained, but that makes me think about the movie “Animal House”. There’s a scene at the end, before the “parade incident” where Flounder goes into a store and says: “may I have ten thousand marbles, please.” I think you’d need more than 10,000 mothballs to cover this school.

Anyway, back to our walk. Oh, I didn’t explain the mistake. I’d edit this if I could, but you’re just going to have to follow this circuitous path with me – no shortcut. And, if you’re a fan of the old movie “Holiday Inn” no shortcuts to the shortcut. You see the problem was that, in the 80s, when we took that school out of mothballs, you know the ones it wasn’t really in, it had to be made to be compliant with the Americans with Disabilities Act (ADA). That would have cost more than building a new school. Although, I never understood that, it’s a single-story building, how hard could ADA compliance be?

So, we spent a big bunch of money renovating the other schools in town, adding on here and there, improving this and that, and making those schools ADA compliant. We turned Southwest School into apartments for what I considered back then, old folks. That probably also required the building becoming ADA compliant. Don’t try to understand. Just do what I do, mutter “government, pfft, can’t trust them to do the simple things…”

OK, now we can go back to our walk. When Maddie is on a short walk, she pulls me to the middle of the entrance driveway to the apartments and then we cross the street. We don’t cross before and we never cross after the driveway, in the middle. It’s like when Maddie goes out to pee. She walks the perimeter first, and then she pees, unless she smells something interesting, or hears a noise, or a bird. No shortcut on the way to the bathroom, or on that walk in the park.

Yesterday, Maddie did what Maddie sometimes does. She balked at the idea of a short walk. I said: “let’s take a short walk today, pup” and she got her Irish up. She can do that, she’s Irish. She does this in a predictable way. She acts as if we’re going to walk to the old folks place – what the heck, if I am one, I guess I can say it. She acts all calm and stuff, but when we get to the driveway to the park, she hunkers down , leans into my left leg and pushes me into the driveway. It’s as if she’s saying: “no shortcuts, dude, not today.” We turn. We head down the driveway, and she’s a happy pup.

This post is part of Linda G. Hill’s Stream of Consciousness Saturday prompt. Her instructions for today were:

Your Friday prompt for Stream of Consciousness Saturday is “shortcut/cut short.” Use one, use both, whatever strikes your fancy. Enjoy!

Maddie was right yesterday. Taking the long way around the park allowed us to catch a glimpse of some beautiful fall foliage.

I like when the limbs start to show through. 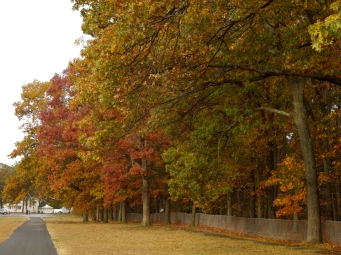 This is the walking path. I would have missed this if Maddie hadn’t insisted on the long walk.

This tree has given up most of its leaves.

This park is across the street from Maddie’s park. 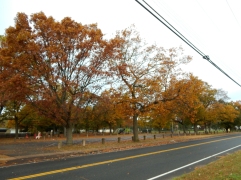 Not many leaves left, but they are pretty.

The walking path was deep green the last time Maddie and I walked.

We have to cross this field to get to the path.

“Yes! We’re going the long way. That leg-nudge gets him every time.”

I need a wire filter, but I think you can see why I took this photo.

This is “Family Park” – opposite “Veterans Park” a.k.a. Maddie’s park.