Faith came over on Sunday, ostensibly to finish a bench she has been making in my workshop. Maddie and I delayed her entry into the shop – Maddie with some oooh-oooh-oooh-Faith-is-here-Faith-came-to-see-me time and me with two heavy desks located in the basement family room and a dumpster in the driveway. Maddie was mad at me, because when we were schlepping stuff up and out, Maddie had to be in her crate. So, when we were done filling that dumpster, Faith agreed to take Maddie out with the clear and present expectation that sitting would be required.

They were only gone a few seconds when my phone rang:

“Can you please bring some peanuts out here…”

Faith managed to capture the encounter with Sammy on video. For any of you who have wondered whether Sammy and Maddie really have a friendly relationship, Faith’s video (below the gallery) should suffice as evidence. The best part is at the end, when Maddie points at Sammy as if to alert us to an intruder.

The photos, offered as additional proof, were taken earlier, after Maddie and I returned from our walk and a few minutes after Faith’s encounter when we sat with Maddie, Sammy and his merry band of neighbors. I think they were trying to decide how many peanuts I had brought to Faith’s rescue.

This post is part of Linda G. Hill’s fun weekly series One-Liner Wednesday. If you have a one-liner, I’d encourage you to join in on the fun. You can follow this link participate and to see the one-liners from the other participants. 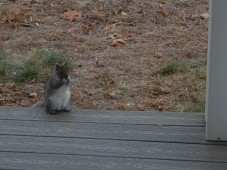 “Hold up there! Can we talk about those peanuts you’re supposed to have.”

“So, do you have those peanuts?” 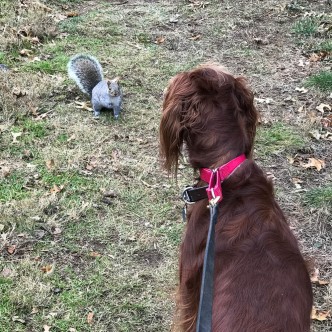 “Hi there. You’re new around here. I’m Sammy. They should have given you a bag of peanuts before sending you out here…”

Sammy does get scared now and then.

When Maddie is on her cot, she really doesn’t care about the squirrels.

Yeah, this guy doesn’t look hungry, but he’s got to keep up his weight as it gets colder. 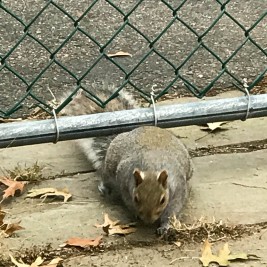 “Yikes. Can you raise this gate an inch or two. I’ve put on a few ounces.” 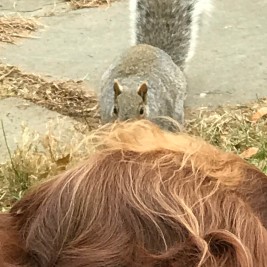 “I love this photo that Faith took of Sammy.”

After Faith finished working on her project, she helped me clean up te leaves. She likes using the leaf-blower.

After our work was done, it was off to the bar. I forgot to snag a picture until we were almost done, but we started with an order of BBQ Tots

After sharing those tots, I had an order of Mussels