We’re still on a break from Thursday Doors, so I thought I’d rewrite a post
from a few years ago when not too many of you were following me.

I think it was in 1964 when I received a chess set for Christmas that had apparently belonged to my paternal grandmother. Sita (Syrian for grandmother) and I had always had a special bond. People said I was her favorite grandchild. I won’t argue. I was the youngest child of her youngest child. We lived next door to her until I was ten. She liked the fact that I had a Biblical name and in her eyes, I could do no wrong.

When I was about twelve, she suffered a stroke that left her with no short-term memory. She needed constant companionship, so I spent a lot of weekends with her. I enjoyed those days and as you might guess, I dreaded those days.

I understood the notion of service, but spending whole days with your 80-yr-old grandmother was tough duty. Well, maybe not so tough for an introvert like me. However, being with a person with no short-term memory is hard. We would talk but she would forget the conversation as we were having it. We would watch TV but we couldn’t watch anything with a plot. We watched variety shows, and we watched cartoons. She had always seemed so serious so it was fun to see her laugh. We played a card game she called Basada which appears to be the game Bastra. If she fell asleep, I would do homework or work on models.

Once I had the chess set, I started taking it to her house. I was trying to learn to play better by reading a book of historic games. The book included the moves of these games along with some commentary. I would step through the game, trying to understand the strategy. One day, after Sita fell asleep, I set up the board and began working my way through a game. After a while, Sita woke up and came into the dining room. She looked at the chess board and said:

With an age-appropriate male attitude, I suggested that she probably was thinking of checkers.

She said “no, checkers, all men same. This game, men different” then she asked if I wanted to play with her.

My first thought was how awful that could be. If she didn’t really remember how to play, there was no way I could teach her; I would have to explain the rules of chess to her every time it was her turn to move. So, continuing in my arrogance, I asked her: “do you remember how the men move?”

She picked up a Pawn and said: “he moves slow.” OK, that’s not how I would have described it, but it was accurate.

I pointed to the Rook and asked: “what about him?” She said: ‘he moves straight.” OK, now pointing to the Knight, I asked again if she knew how it moved. She said: “crooked” and she drew an “L” in the air with her finger.

I was surprised. I started to feel a little bad about testing her but I continued. I pointed to the Bishop, and she seemed a little confused, I think she was also getting annoyed with my questions. She didn’t remember the term ‘diagonal’ but she remembered that it had to stay on its color. Then, without my prompting, she picked up the King and the Queen together.

She said: “these are married.” I laughed, thinking yes, I guess they would be married. Then she said: “in marriage, the man is important but the woman is strong” and she held the queen for me to see.

That made me think about how she had immigrated to this country from Syria when she was not much older than I was at that time. How her husband had died, leaving her with six children, my father only four years old, to raise just as the Great Depression was about to begin.

In remarkable fashion, this woman, with no marketable skills, a poor command of English and a limited understanding of the world around her, managed to survive and provide for her children. She was the very picture of strength in my view.

She remembered enough about chess to play without too many reminders and she managed to beat me on occasion. Playing with her made the chess set even more special and it was one more way we could pass the time without the visible signs of her condition. Playing seemed to evoke memories from her childhood which she would share with me. Of course, she told the same stories over and over, but it didn’t matter. She remained in her role as grandmother, telling stories to pass along her knowledge and wisdom to her grandchild.

During those games, she was taking care of me and the world was right again. 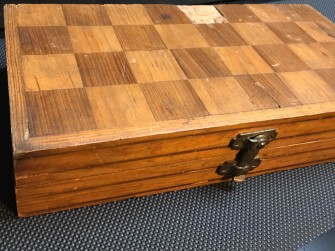 The square has always been missing. 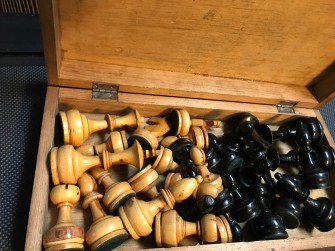 Pretty much the way I found it 50-some years ago. 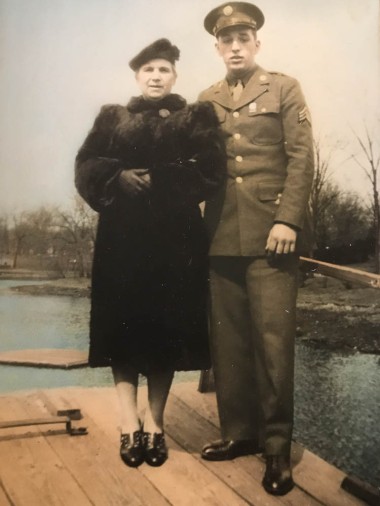 My grandmother and my dad before he shipped out for the Pacific. 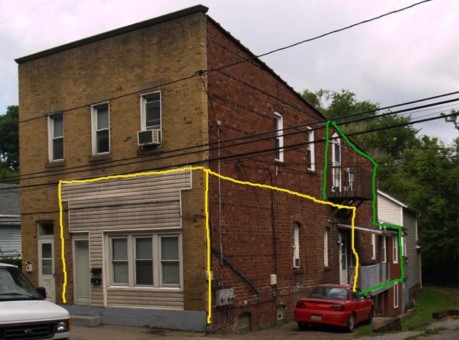 Her apartment is outlined in yellow. Ours was the one outlined in green. My favorite aunt live in the house in the back. 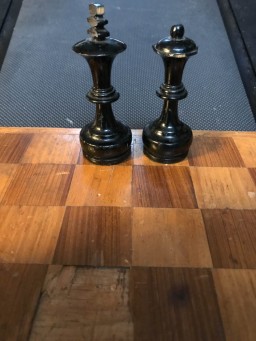 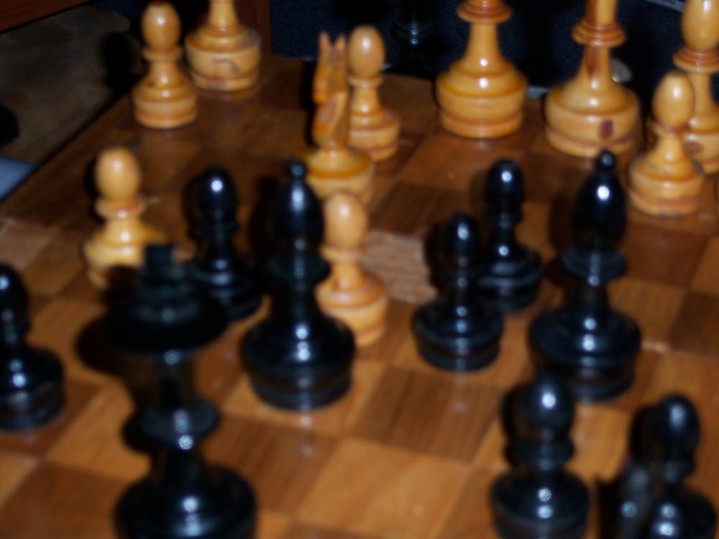 A couple of slow-movers, one moving crooked – quite a crew.