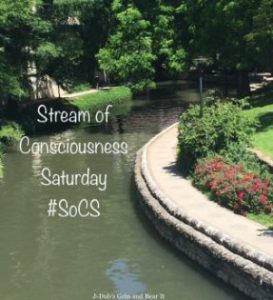 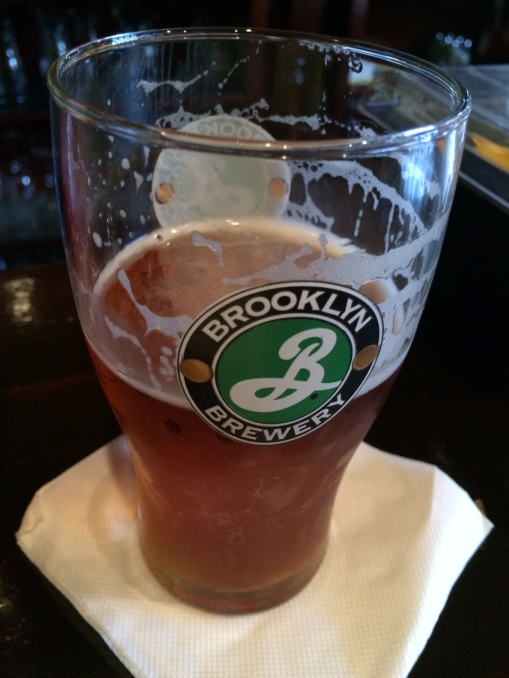 It’s a good beer. It’s even better when it’s unexpected.

If we were having a beer, you’d be the one who is late.

“Hi Cheryl. No sign of the old man yet?”

“Nope. That’s OK. Whenever he’s here before you, he grumbles about your being late.”

“Well, I won’t be grumbling. And I won’t be waiting, I’ll have a Brooklyn.”

“I had anticipated that. Brooklyn Lager in a tall frosty glass.”

“Thanks. Here’s to your new blog.”

“Aw, thank you. It feels good making a new start.”

“What the? You started drinking without me?”

“So, that means you opened a tab…”

“Nope. His beer is on the house because he was one of the first people to follow my new blog.”

“I would have followed if I knew there was a free drink involved.”

“Your support is overwhelming. Wine? Bourbon?”

“I guess that means this is on me. Oh, what the heck, I’ll have Bourbon.”

“With a glass of seltzer and a separate glass of ice…coming right up.”

“Wait, Cheryl, what’s the stuff next to that bottle? The bottle with the horse on top.”

“That’s Blanton’s. You’ve had it before, our distributor doesn’t always have it.”

“You say I’ve had it before…I don’t recall.”

“By the time you decide, I’ll be ordering a second beer. If you don’t remember having it, it will be a new experience. Think of it as a benefit of a failing memory.”

“My young friend is right, I’ll go with the Blanton’s.”

“OK, here’s the ice, the seltzer and a nice pour of bourbon.”

“So, why were you late today?”

“I was wondering if you were going to ask.”

“I just did…care to answer?”

“It’s a long story. I had to spread ice-melt on my driveway.”

“You scoop it out with a bucket?”

“No. I put the ice-melt in a bucket. Actually, I just use the salt-sand mix from the town.”

“Our town has a pile of the salt-sand mix they use on the roads that residents can take. I fill up a couple of five-gallon buckets each year.”

“They just give it to you? For free?”

“Not really… they bought it with my property taxes.”

“I guess. But my taxes are way higher than yours and my town doesn’t give us squat.”

“Cheer up, it’s not like a bag of ice-melt is going to break the bank.”

“It’s not the cost, it’s the weather. This stuff caught me by surprise. It was fifty-two degrees yesterday.”

“Probably a good thing. If it had been colder, that rain would have been a huge amount of snow. We’d still be digging out.”

“Instead, we’re worrying about flooding. Do you get water in your basement?”

“We never have, but I don’t take that for granted.”

“I put drain tile in to route the water out away from the foundation, and I clear the snow that piles up against the house.”

“How many Irish Setters have you had?”

“So how come you’re not drinking in an Irish pub?”

“What kind of question is that to be asking him? And you wonder why you don’t get a round on the house.”

“Offense accepted. Would you boys like another round, perhaps some food? We make a very good Shepherd’s Pie.”

“I’ll have another beer.”

“I’m still nursing this bourbon. Shepherd’s Pie sounds good, but it’s a bit much for an afternoon snack.”

“How about some fried mashed potatoes? They’re stuffed with the same spicy meat we use in our Shepherd’s Pie.”

“That sounds good. Is the order big enough to share?”

“As an appetizer, maybe, if you were eating with your wife”

“What’s wrong with you? Sharing an appetizer…”

“OK then, two orders. They come covered in a melted queso sauce, you boys OK with that?”

“I think we can handle that.”

Linda gave us quite the challenge for Stream of Consciousness Saturday:

“Your prompt for #JusJoJan and Stream of Consciousness Saturday is as follows: read closely. When you’re ready to sit down and write your post, look to the publication (book, newspaper, permission slip from your kid’s teacher, whatever you find) closest to you, and base your post on the sixth, seventh, and eighth word from the beginning of the page. Enjoy!”

Since we’re at the bar, and not counting the title and the price, the sixth, seventh and eight words on the Specials Menu are: “fried mashed potatoes.” And please be sure to check our Cheryl’s new place. She’s not only the best bartender in WordPress, she’s a great writer/photographer/poet/friend.

Great River Park in the fog

Flag in the fog

From Dunkin Donuts on a foggy day 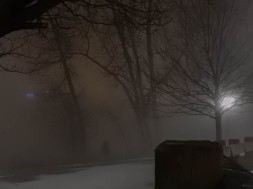 Hartford across the frozen CT River 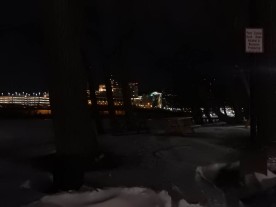 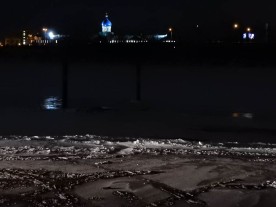 Ice at the boat ramp 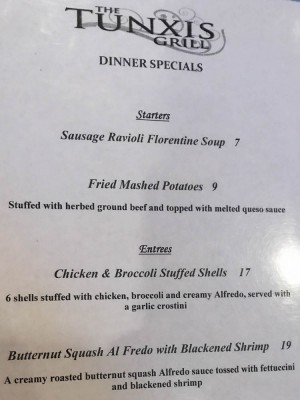 Maddie playing with what’s left of the broccoli toy.