I recently discovered that the “back way” I was taking to avoid highway traffic jams was really an out-of-the-way-run-through-the-woods kind of shortcut. The editor wasn’t surprised to hear that. She has pointed out many times that I am inclined to go what “appears to be” the faster way, but that my routes are often much longer. My father used to say the same thing.

I could go on, but I’ll let the map explain. I could make a lame argument about congestion and spillover traffic, but my new back way also promises to offer many more doors than the old back way, so…

During my second trip home via this new route, I decided to make a quick stop and snag three doors I had noticed the first time I drove through. These doors are the usual suspects in a New England doorscursion: Town Hall, Town Library and The First Congregational Church.

East Hartford used to just be the big hunk of Hartford that was on the east side of the Connecticut River. You would have thought that in 1635, when Thomas Hooker and his band of settlers from Cambridge, MA established Hartford, that including land on the opposite shore of a substantial river would have been a problem. After all, the first bridge across that river wasn’t built until the late 1700s and that was in Vermont.

In 1783, the General Assembly agreed to let East Hartford incorporate as a separate town, but in 1701, they were granted the right to have their own minister. That brings us to our first set of doors. The first Meeting House in East Hartford was built in 1699. It was replaced in 1740. The current church was built in 1835 and extensively modified in 1876, after a fire.

A block down the road, East Hartford’s Town Hall, opened in 1937 and was expanded in 1950. The thing that caught my attention was the sign mentioning the Hockanum River Linear Park Town Hall Trail. Of course, I had to take a peek. I couldn’t get very far, as I was dressed for work, not hiking but I did get some nice pictures of the frozen river.

Sitting in between Town Hall and the church is my favorite find, The Raymond Library. As soon as I saw the building, I knew there had to be a story. If you look closely at the photo in the gallery that shows the library behind the bare branches and shadows, you will notice that the building was expanded in a big way. You might also notice the attention to detail to make that expansion look like the original building. It’s a good thing, but it almost didn’t happen.

Albert C. Raymond donated the land the library sits on in 1879. He died in 1880 and included money to build the library in his will. Library was founded in 1885, and the building was built between 1888 and 1889 at a cost of $6,500. Regarding the expansion, I found this excerpt from “Only more so: the history of East Hartford” by: Lee Paquette.

“In 1968 the Raymond Library opened a large addition, and remodeled the old structure inside. The new portion blended in with the original structure, to preserve and enhance the town’s oldest public building. Before the remodeling, several officials had talked about demolishing Raymond Library and replacing it with a modern building…”

I am so glad they decided not to do that.

Thomas Hooker was the founder of Hartford, Connecticut, but Norm Frampton is the founder of Thursday Doors (as we know it), as well as Chairman of the Grand Counsel of Door Folk. Norm has graciously granted us our independence to embark on doorscursions and share door photos at the Capitol Door Page in Montreal, CN. To visit the Capitol, follow the Doorframe Trail to Norm’s page. Look for the blue frog and click him to gain access to the official list of doors.

The gallery includes a few photos from the Congregational Church Nomination form for the Registry of Historic Buildings. More information is available in the captions. To fully reveal those, click on any photo to begin a slide show.

First Congregational Church circa 1979, at the time of nomination to the NRHB 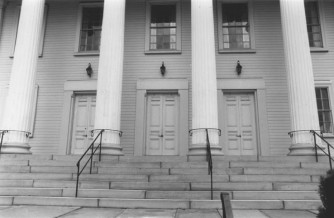 First Congregational Church circa 1979, at the time of nomination to the NRHB

Inside the First Congregational Church

I had to check that out 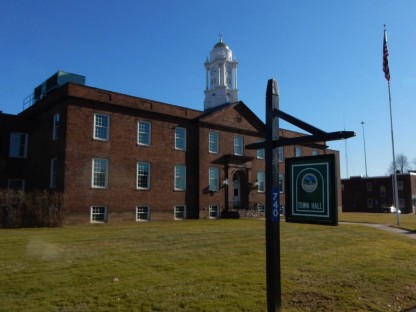 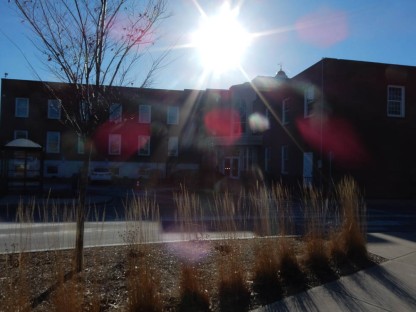 The original building is the section on the left (1st 4 windows) but the details are identical.

Side entrance to the Raymond Library