When I posted about donations, I got a not-so-surprising number of comments about what made people mad about the organizations asking for money. The day after I published that post, I got an email that caused me to realize that it isn’t just people asking for money. Communication today is a mess. Here are some examples of things that bug me:

1) The company that assembled our office cubicles and “system furniture” groupings constantly sends me emails showing new furniture options. How often do they think we’re going to change? On the other hand, when we’ve called them to come and make a modification, or repair, it takes weeks to get their attention. Even when we’re clearly going to spend money.

2) Organizations that send me a thank you for a donation I never made and include a request to make a similar donation this year – Um, if you’re already lying to me, why would I want to give you money?

3) Companies, like Amazon, Amazon and Amazon that browbeat me into reviewing something I haven’t received yet or something I purchased as a gift. Think about it Mr. Big-Data Bezos, why am I buying stuff in December? Granted, I might be one of those I-buy-everything-on-Amazon folks you love so much, but I can’t believe they’re reviewing every purchase. As I said before – You had merchandise, I had money, we exchanged same and we’re done. It’s called shopping. Humans have been doing it since they stopped hunting and killing for every meal.

5) Similarly, I have a favorite hotel chain. If I have a choice, I will always stay in a hotel that is part of that chain. I am a member of their “rewards” program and I have used reward points to stay in Pittsburgh on the weekend of a baseball game, a hockey game and/or a football game, several times. I have also paid money to stay in their properties (in Pittsburgh) on similar weekends.

Imagine my initial delight when I received an offer to “Enjoy World Class Hockey in Toronto.” Of course, I assumed this would be a game between the Maple Leafs and the Penguins. Now, imagine my surprise when I opened the email and saw an offer to fly to Canada to see the Detroit Redwings play the Maple Leafs.

What bothers me the most about these odd bits of communication is that I understand how much data about me these companies have. All of these “offers” were doomed to fail and all the senders should have known that. All of those companies should also know that the more useless email they send me, the more likely I am to ignore all their email.

I work with data and information. I have been doing this work for over 40 years. I know what companies CAN do with the data they hold. I know how they can analyze that data, and the other data they have about me, and how they could combine that accumulated knowledge about me and send me fewer but much more relevant offers. I’m not looking forward to marketing that will, in fact, seem creepy, but I am looking forward to the end of marketing that just seems stupid.

We had a snow storm pass through Saturday night, leaving us with about 6” of snow to clear before we head into warmer days, reaching 67°f (19°c) on Wednesday. 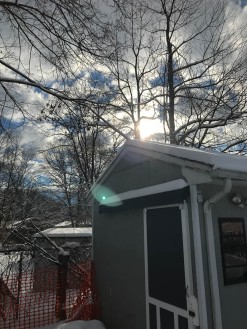 The storm has passed, the skies are clearing.

Time to get the snow blower started

It snowed overnight, but it’s a beautiful morning.

The storm is over

6″(15cm) of snow after the plows push it off the road onto our sidewalks.

Still trying to get the discharge in the sun.

“Thanks for playing. I’m ready to go in now.”

Maddie doesn’t seem to realize that she’s laying on half her toys. 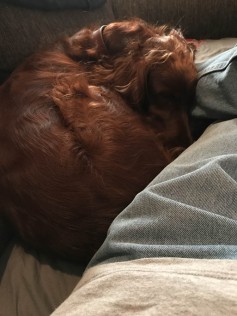 My legs have been arranged to support the dog.

“I can’t get comfortable. Do you think we could sit outside?”

Of course, this is why I cleared the snow from that par of the yard.

“Is is time to go back inside?” “Yes Maddie. We’ve been sitting for almost an hour.”