“I replaced the toilet paper and I wiped the smudges off the faucet.”

Today marks the one week anniversary of Ash Wednesday, a.k.a. the beginning of Lent. When people ask: “what are you giving up for Lent?” I try to explain that I started a practice, several years ago of adding in the little things that others normally do. I wrote about this back then, but I don’t expect you to remember. In fact, I hope you forgot so you won’t go all: “oh geeze, not again…” on me.

Just in case you want to incorporate this technique into your Lenten routine, here are a few guidelines as to what counts, and what doesn’t:

It doesn’t count if you normally do it or should do it – I normally iron any of my work shirts that need to be ironed. Other things of mine that need to be ironed, I usually toss in the hamper, clean, with the goal of putting them away before they get wrinkled the next time. Hmmm, maybe that’s something I can work on.

It doesn’t count if the other person doesn’t want you to do it – I will not be cooking, and I won’t be doing my wife’s laundry. I won’t be doing mine either, because she doesn’t trust me with the washer and she lives in fear that I will burn the house down after using the dryer without cleaning the lint trap.

It doesn’t count if it benefits you – I like to go and get take-out for dinner, so I can sit at the bar and have a beer while it’s being prepared. “Honey, how about we just have pizza tonight?” isn’t a sacrifice.

The one-liner stems from something my wife normally does. She starts new rolls of paper towels and toilet paper before the old one is completely finished. She leaves the little bit that’s left on top of, or near the new role, so no one has to deal with replacing the roll in a moment of need.

This post is part of Linda G. Hill’s fun weekly series One-Liner Wednesday. If you have a one-liner, I’d encourage you to join in on the fun. You can followt this link to participate and to see the one-liners from the other participants. 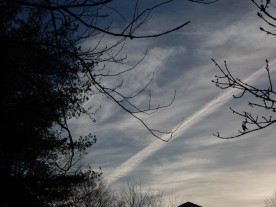 One contrail fading and one being created – can you find the new one? 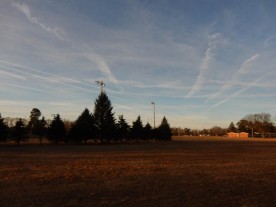 We’re on our way out of the park.

No skating today, it’s not cold enough to freeze. 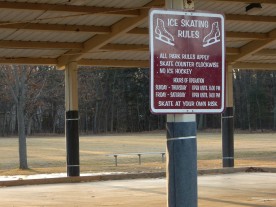 Rules, always with the rules.

We’re walking though the back of the ball field because there are people on the path.

Sunrise over an empty ball field

I like the way the sun reflects off the chain fence.

The Colt Dome and an earie halo around the lights.

It’s the path at Great River Park, but I’m visualizing a lonely walk in a bad part of town. 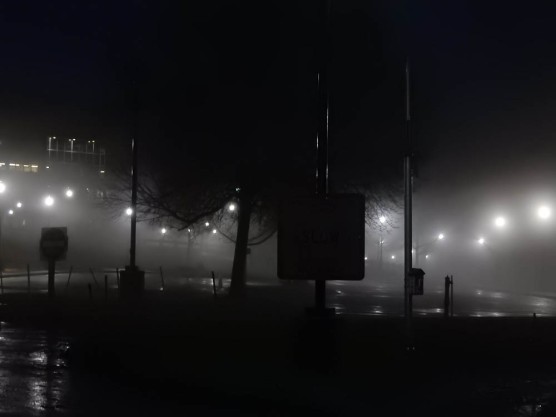 Hartford and its multi-colored reflections.

Me and my shadow, i.e. Maddie