When I went to visit my friend in Chicago, he had suggested that we take one of the Chicago Architecture Foundation’s (CAF) walking tours. He invited me to choose the tour I wanted to go on, but given the timing of my flights, there really were only two choices – Chicago Modern and the River Cruise. Chicago Modern wasn’t the kind of architecture either of us is drawn to, but it was a walking tour, and we both enjoy walking. A compromise was reached that fell somewhere between unlikely and absurd – we would go on the walking tour, then stop for a beer, and then, if we felt like it, take an evening cruise. As I mentioned in an earlier post, the place we stopped for a beer had over 100 beers on tap.

Iconic modern and contemporary skyscrapers, as well as works by world-renowned artists, are featured on this 90-minute walking tour. Chicago was at the forefront of Modernism, the style that revolutionized our visual world during the mid-20th century…

Modernism…imagine the sigh in my voice as I say that. I describe Modernism as the “what were we thinking?” phase of architecture. The function beats form the way bland paper covers an interesting rock phase. The phase in which someone realized that humans just need to go to a place that will keep them dry, somewhat warm, and where they can work without their papers blowing around. No need to enjoy going to work. “No need for beauty in your day – you have work to do.”

Sorry for being a little harsh. In fact, one of the hallmarks the modern building movement in Chicago was the mandated inclusion of public art. So, even though you’re going to work in a huge, bland, pug-ugly box of steel and glass, you’ll pass a beautiful piece of art on the way in. I knew about the public art thing, albeit from an unlikely source. If you recall, near the end of the epic chase in The Blues Brothers, we have this bit of dialog:

Elwood: This is definitely Lower Wacker Drive! If my estimations are correct, we should be very close to the Honorable Richard J. Daley Plaza!

Jake: That’s where they got that Picasso.

And, it’s fitting that Elwood called attention to the Richard J. Daley Plaza, because Mayor Daley was an instrumental force in the modern architecture boom in Chicago. Again, according to CAF’s website:

“Richard J. Daley didn’t much care for modernist architecture. But his personal preference for classical design didn’t deter him from championing the development of sleek, steel-and-glass buildings like the Chicago Civic Center, the Sears Tower, the Inland Steel Building, and the Federal Plaza complex.”

Richard Daley wanted to showcase Chicago as a modern city, to help it grow and prosper. I’m not sure it’s the only reason, but Chicago certainly did grow and prosper. And, from my one-day visit, today, it’s one of the most active cities I’ve seen. On a cold, almost-rainy Saturday, the city was alive with people, and the skyline was dotted with residential towers and commercial buildings under construction.

Speaking of a man with control over his empire, this is supposed to be a post about doors. From his desk in the frozen wilderness near Montreal, Canada, Norm Frampton wields his power over the landscape of doors and door aficionados. Norm summons his followers to bring forth new doors, old doors, historic doors, crazy doors, colorful doors, remnants of doors and metaphorical doors in the form of gates, portals and openings. To see this vast collection, visit Norm’s site. Near the bottom of his doors, you will find the docent of your (virtual) walking tour – Mr. Blue Frog. Click on him and prepare to be amazed.

To be honest, I didn’t find many interesting doors on our walking tour. Fortunately, there are some, but even more fortunate was seeing the older, classical buildings that were pointed out in contrast to the modern subjects of our tour. Along with the beautiful art work, the juxtaposition of old and new, short and tall, absorbing and reflective all team up to make a beautiful city. I look forward to visiting again, perhaps with enough time in the city to take the: Historic Treasures of Culture and Commerce tour.

I’ve put as much as I can remember from the tour in the captions of the photos in the gallery. If you have time, click on any photo to start a show. If not, enjoy the collage, but thanks for stopping by today. 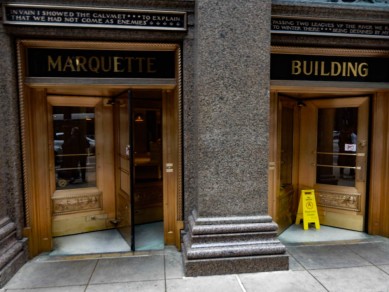 I have a soft spot for revolving doors. 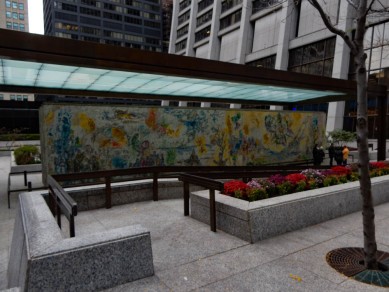 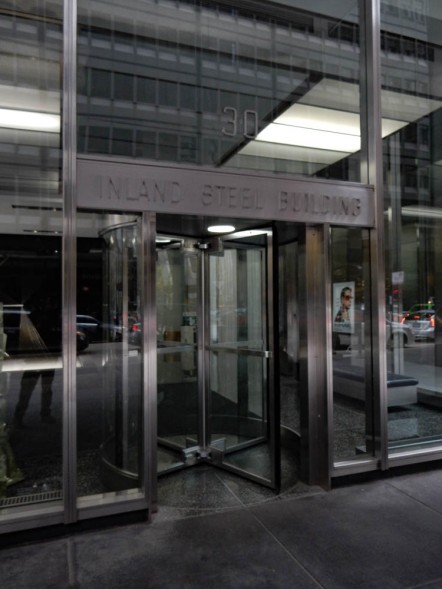 The Inland Steel Building was built in the years 1956–1957. It was the first skyscraper to be built in the Chicago Loop following the Great Depression. The building is clad in brushed stainless steel. 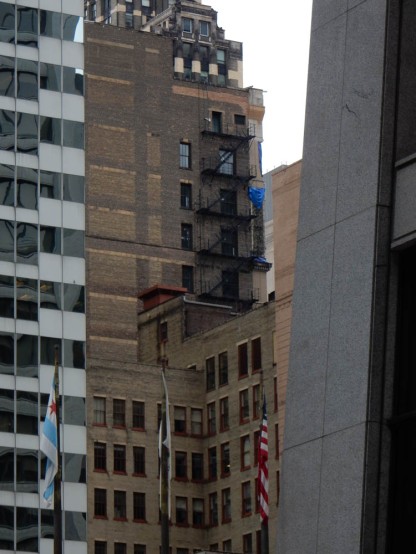 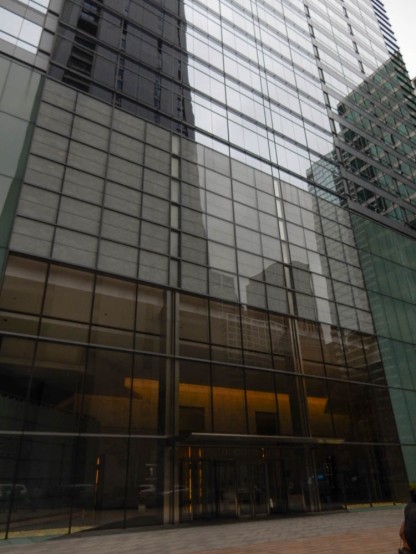 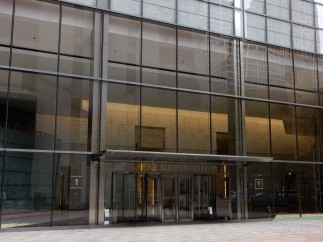 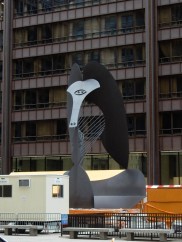 “That’s where they got that Picasso.” “Yep” 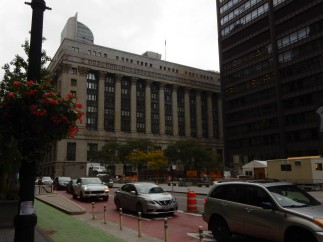 If you’re a fan of The Blues Brothers, you are currently saying “hut hut hut” to yourself. 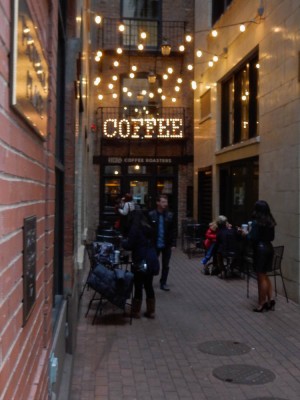 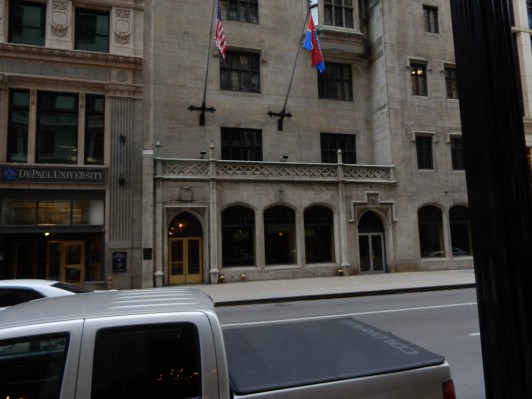 Old and new – On the left, well-preserved. On the right, nice doorway ruined with modern door. 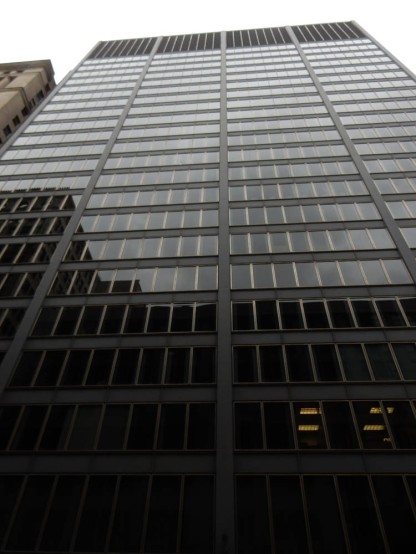 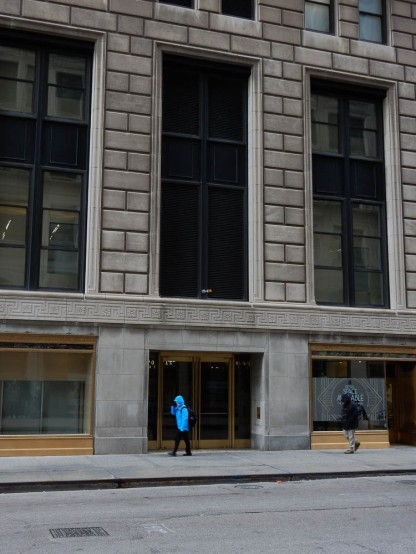 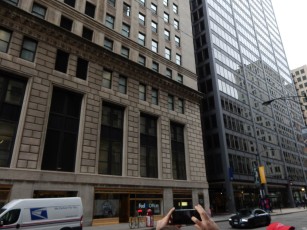 Older buildings often had lower floors that were different from upper floors. 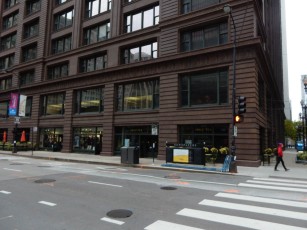 Not modern – still sporting decorative elements. I like it. 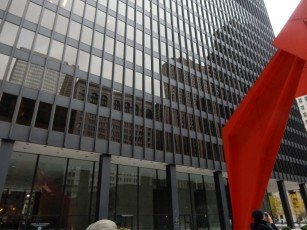 Public art – the open spaces provide a nice break from the tall boxes. 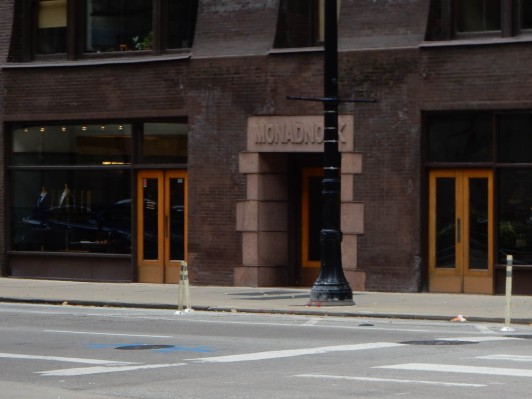 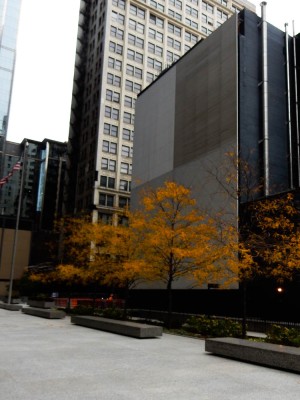 The four (square) ventilation panels on the building to the right are part of the public art projects.