Maybe Less Random Than I Planned

I’ve been debating whether or not to publish this post for quite some time. The tag line mentions “Random Thoughts” but there seems to be a well-established pattern. Also, there seems to be some confusion. I’ve answered questions in response to comments, in response to emails (yes NoFacilities has an inbox at gmail dot com) and on Facebook. After a recent flurry of questions, I decided to add this post to my About page and link to it on the sidebar.

Of course, not a lot of people visit the About page, or notice the sidebar. But still, if I hang this there, I can always point to it.

I probably will still respond to questions, because I was taught that it’s impolite to point. It may not be impolite but pointing does have that “I’m too busy to answer you. Go see this” connotation. Like when you ask a person in Home Depot for assistance and they tell you to download the app. I want to avoid that.

What does that mean? Is it still relevant after five years? And how does it relate to the burgeoning pile of stuff found here?

Random is hard to explain and often causes confusion. I have a number of followers who signed-up after a rare post about politics, education or religion. In looking at their sites (something I do whenever someone follows me) I realize they were probably expecting a steady diet of the topic du jour. In most cases, they don’t come back. I switch topics based on my state of mind, where I’ve been, what I’m working on and the weather.

Life lessons is exactly what the term implies, but I’m talking about my life. My life began in a somewhere-south-of-middle-class neighborhood outside of Pittsburgh, Pennsylvania. I grew up in Pittsburgh. I’ve lived in Georgia (for less than one year), New York City (for just over one year), Seattle, Washington for about three years and Connecticut for more than half of my life, and I’ve worked forever. Seriously, I was a pin boy in my father’s bowling alley when I was 13.

Hopes and dreams – well, we all have those. What you see here are mine, or mine coming to fruition, or my attempts to bring mine to fruition, or the ones I’ve abandoned because they were false.

About the schedule: Mondays are for posts like this. And Mondays are for those rare religion, politics and education posts. Mondays are also when I like to rant. Finally, Mondays are when I give up and just throw pictures against the virtual wall and see what sticks. Yes, I know, Maddie sticks.

One-Liner Wednesday is self-explanatory, as long as you don’t expect me to think of “one line” as a limiting factor. One line is important to the story, but there is a story. Linda hasn’t sent me home with a note to the editor…yet.

Thursday Doors IS self-explanatory, and you can expect to find it here as long as Norm keeps it alive and humming. Note to Norm: we need a theme song.

Saturday. Oh Saturday. The biggest source of confusion. Let me try to explain:

The conversations are something between questionable journalism and fiction. Parts of them have happened, but not always at a bar. They are offered for entertainment, although you might find me sneaking some of those controversial and polarizing topics in from time to time.

As for the characters, I am real. I exist. I go to bars. I have friends. Cheryl is real, and sometimes I check with Cheryl to see what she would say. She’s not behind the real bar, but she might like to be, and she would be an amazing bartender. The person behind the bar is Cheryl-like, unless she’s not. When the person behind the bar shows qualities that are unCheryl, Skippy takes Cheryl’s shift. Skippy is not real.

My buddy is based on real people, who have sometimes said real things, but my buddy isn’t real in the you-can-poke-him-with-a-stick sense. However, if you met most of my friends, you would say for each of them: “oh, he’s your buddy at the bar.”

Lately, I have been trying to write the bar conversations in stream-of-consciousness style, based on the prompt Linda give us. Since real conversations are spontaneous, I think these posts might benefit from that approach. Sometimes, editing is required. I will let you know when I fail at the SoC part.

I hope this helps explain things. If not, please check out the pictures I’ve thrown against the wall. Thank you for visiting this space. I appreciate your time, your ‘likes’ and your comments. 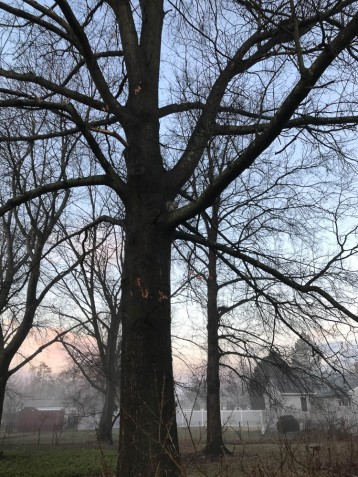 A little bit of fog left in the neighborhood.

It rained pretty hard overnight. that leaves puddles and reflections. 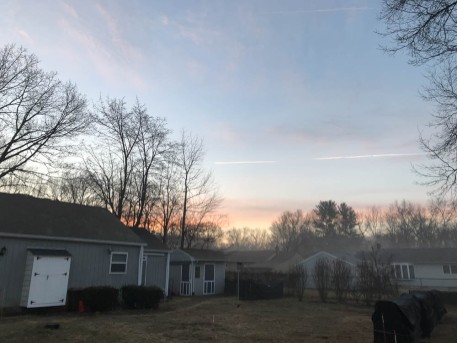 The sun is about to finish off what’s left of the fog. 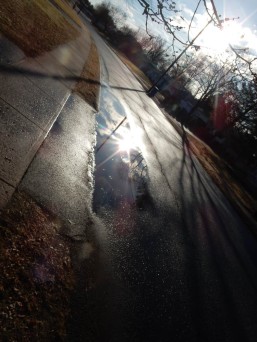 We made it out for one walk this weekend. 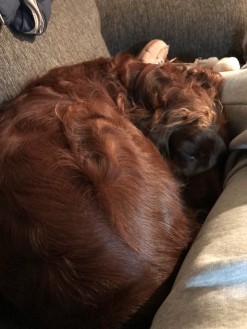 It’s late. It has been a tough weekend to be a dog.

We passed this house and watched the guy back over his newspaper. All I could think of is what my dad would say.

“I don’t think we’re going for a walk today.” 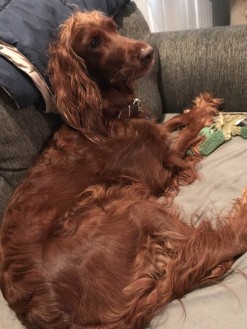 It’s cold and raining. Maddie has been out, but only for necessaries.

The raindrops are hanging on tight. 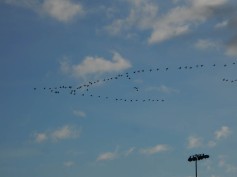 Heading back to Canada.

It rained most of the weekend. We snuck out for a walk during a short dry spell. 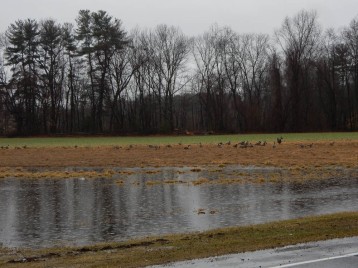 DOesn’t look like the geese made it very far.