I’m writing this on Saturday while I’m supposed to be doing my taxes. I’ve already read every blog in my inbox, including Teagan’s. I always read Teagan’s, but I usually save them for a quiet time because I don’t want to rush through the story. I’m worried, though – Bob the hummingbird is in trouble, and I somewhat identify with Bob. He’s quick to jump into action, but his train of thought is easily derailed. Yes, taxes, that’s what I supposed to be doing right now.

I also had a friend call to ask for some help with a Microsoft Windows/Office technical problem. I stink at giving support. I mean, I know what I’m doing, and I can usually walk a person through to a solution, but I have a lousy bedside manner. I guess that’s computer-side and I guess I have none. That’s because most of the technical support requests that I get are from coworkers and most of those are self-inflicted wounds, or things that they’ve been warned not to do, or trained how to fix. I help them, but I remind them about the training and warnings and stuff.

I know – it’s not what they want to hear. It’s like when your mechanic says: “you might want to replace these brakes” and you say: “can we wait a little bit?” Then, a few months later your brakes sound like the Radio Flyer wagon your son left out in the snow all winter, and the job costs $1,200 instead of $600 and you’re angry. It’s your fault. You’re mad at your mechanic mainly because you know it’s your fault. He refrains from saying “I told you so” because he needs your business.

Now, there are a few of you who might come to my defense because I’ve helped you with a WordPress problem in the past, and I was nice about it. Well, that was email. It’s hard to be snarky in email ‘cuz I actually have to look at my comment and ask myself: “do I really need to say that?” and of course, the answer is “no, no you don’t” and I delete the snarky bits.

As you’ve probably guessed, I’m procrastinating on the taxes. If I don’t finish this post, I’m going to make a bunch of notes, go visit Teagan’s site to get the URL so I can link to it here, and before long, it will be time to go to the bar, you know, to conduct research for those posts.

My wife just told me that a branch may have fallen out of our neighbor’s tree. Actually, the branch fell in 2011, but it got hung up in the tree on it’s way down. It’s been hanging there lifeless for seven years. Tree people call those ‘widow makers’ ‘cuz they can fall out of the tree at any point. Anyway, she thinks I should check to see if it fell into our yard (between the fence and the side of my garage). Normally, I would say: “yeah, yeah” and check in October when I clean the gutters. But, with those taxes looming in my future, I’m thinking I should check now. If I have to get the chainsaw out, that could really mess-up this day.

OK, the branch is 100% totally in my neighbor’s yard. But, all was not lost. I mentioned to the Editor that the slipper-like shoes I wear when I just need to run outside might be good for wearing on the treadmill thingie we have. It’s not a treadmill that goes by itself and you run along, it’s one that resists the belt so you have to move it with your feet. I’ve been on both types – I think this is harder because your legs are pushing against a force, not just keeping up. Of course, I had to try it out. The shoes do work, so maybe I can easily add this machine to my routine. I also had to take Maddie out, because I had been outside without her and she doesn’t like that.

I like the idea of the treadmill because it fits with the recommendation of an article I read recently that says you should try for ‘three-tens’ a day, instead of 10,000 steps or other such nonsense. ‘Three tens’ refers to three 10-minute periods where you get your heart rate and respiration up. Not so much that you can’t talk, but far enough that you can’t sing. Anything that prevents me from singing is a good thing for those around me.

It’s Sunday. The taxes are done, but I fought a good fight.

Can you find him? Hint, there are two.

The two black squirrels are chasing each other through the tree.

These guys were having too much fun.

“Thanks for the peanut” 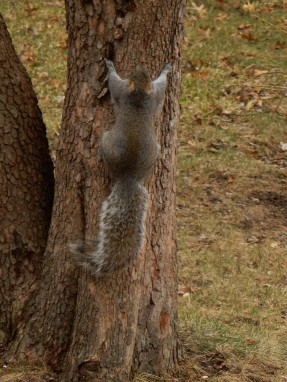 He jumped from the ground a few feet away. 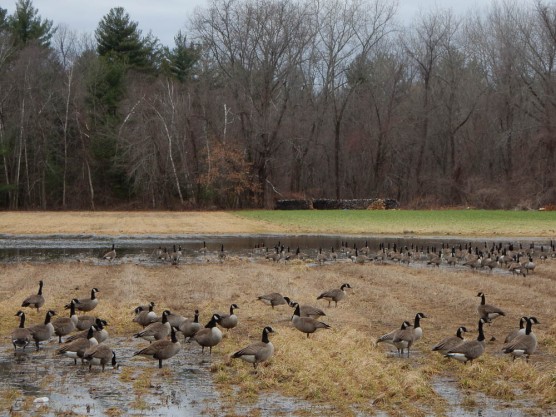 “This place is a mess”

I guess there’s a lot of stuff to eat here.

Yes, Maddie, I know someone is going to want to see a picture of you.

It’s a cold day at the park. 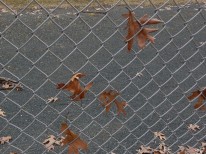 The storm left many leaves stuck in the fence at the ball field.

Responding to the call of peanuts.