Today’s doors belong to either St. John’s Episcopal Church or the Calvary Congregational Methodist Chapel in East Hartford, CT. The latter’s name is on the sign in front of the church, but the former has all the history – none of which says it doesn’t exist. There was an article in the Hartford Courant in 2014 about the building being for sale, but the article hinted that the congregation was hoping to still be able to use the building. Good thing I came for the doors.

I am going to lean heavily on the National Registry of Historic Places (HRHP) nomination form, because 1) it’s extensive and 2) it sent me on a research journey that was quite interesting:

“St. John’s Episcopal Church, East Hartford, is located north of the center of town on the southeast corner of Main Street and Burnside Avenue… there are two structures on the site, the church itself and a hall. A house on the site was demolished in 1970.”

St. John’s Episcopal church lists an address on Main St. The Methodist Chapel, lists an address on Burnside Avenue. This suggests to me that both congregations are still involved with this building. The fact that there was a house on the site, as recently as 1970, gave me hope that I might be able to find a picture of it. I especially wanted a picture after I read this in the nomination form:

“The front portico with handsome entablature, raking cornices, and cornice returns was removed by the Antiquarian and Landmarks Society and continues in possession of the Society. For photograph of the house, see the cover of The Connecticut Antiquarian, XXII (June 1970).”

In searching for that cover, I discovered a wonderful resource for historic books – Resource Books, LLC – which turns out to be located in a neighboring town to the one in which I live. I bought the book, because I wanted to use the photo and because this edition has information on another CT historical site that I hope to visit. Tami, the nice woman who runs Resource Books was kind enough to send me a photograph of Pg. 12 of the book, the page on which the story of the above referenced “front portico” ran. Even more ironic is the fact that the Antiquarian and Landmarks Society, has stored the dismantled portico in the Hatheway House Barn in Suffield, CT – the very same building I am hoping to visit.

“The dominant features of the exterior of the church are the brownstone masonry, the high gabled roof covered with multi-colored slate, the Gothic lancet windows, and the projecting entrance tower at the southwest corner that serves as a porch. The tower, almost free-standing, rises as a truncated pyramid under open belfry, trumpet spire and weathervane finial.”

The other building that remains on the site today is a social hall, that was originally built as a gymnasium. In fact, it was the home of the first indoor basketball court in East Hartford. I mention that in honor of today’s opening round of the NCAA Basketball Tournament. The interesting thing about the social hall is the fact that it’s constructed of precast concrete blocks, that look remarkably like the brownstone used in the church.

Given how well my crude illustration of architectural details at Christ Church Cathedral was received, I have included additional illustrations (in the overstuffed gallery) to accompany this final section from the nomination form:

“There is a heavy, wooden double door in each of the three sides of the entrance tower, … Corner buttresses of the church and the tower flank the west doorway. The sides of the doorway are chamfered and its arch is supported on consoles. A recessed doorway surround, in which the heavy wooden doors are set, also has chamfers that are embellished with a raised quatrefoil and foliate motif. The wooden double doors, shaped at the top to fit the arched opening, have a raised pattern of diagonally crossed chamfered boards. There is a small central triangular opening in the gable above the doorway. The other two doorways are similar. The slated tower rises behind their gables.

The front, or west, elevation toward Main Street, is filled by five tall, narrow windows with lancet arches. They are graduated in height, following the slopes of the gable, with the tallest in the center. A small lancet window is in the gable end above. The lapped brownstone coping of the gable edges leads up to a finial at the peak, while at the eaves level the incised year numerals “18” (to the left) and “67” (to the right) are carved as parts of foliate designs in the footstones.”

So much for my blog posts getting shorter.

I am done, but I want to mention that Thursday Doors is fun weekly blogfest, hosted by noted antiquarian and landmarks guru, Norm Frampton. Each week, Norm gathers photos of doors from around the world and stores them in his virtual barn in Montreal, Canada. If you have a door(s) to contribute or if you just want to see more beautiful doors, visit Norm’s site and click on the blue frog. 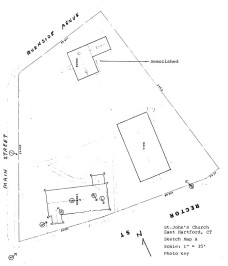 NRHP – map showing where the parish house used to be. 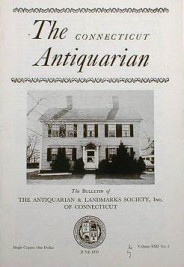 This is the book I purchased. That’s the old parish house on the cover. 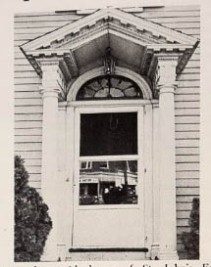 This is the portico to the parish house that was demolished. The portico has been preserved. 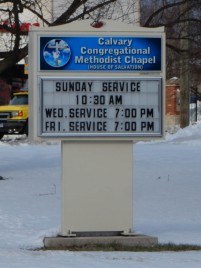 This appears to be the new owners. 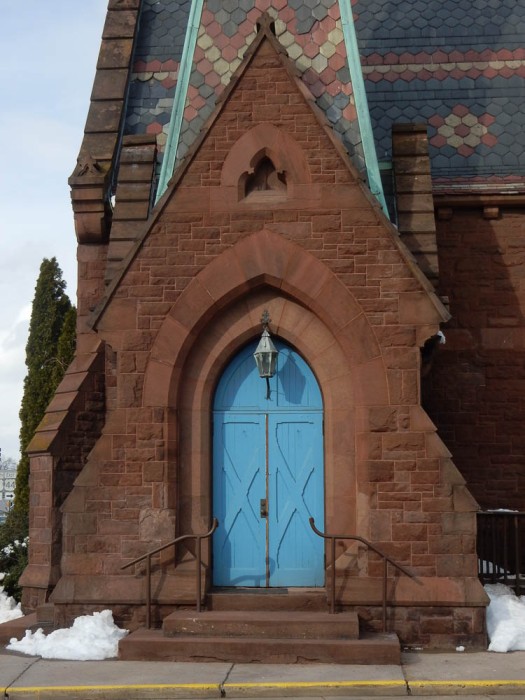 This is the most used entrance door. 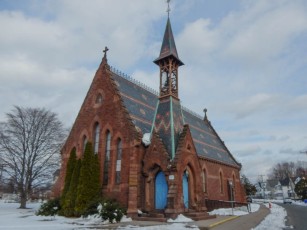 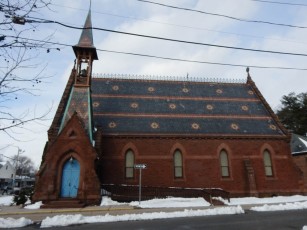 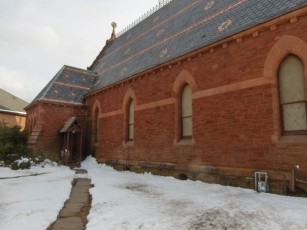 Looking back toward the vestry. Note the corner butress ( for decoration, not structurally required on that portion) 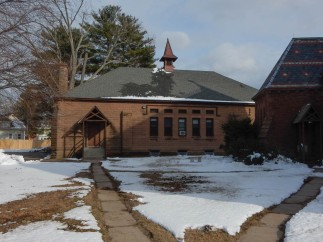 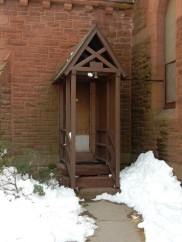 Entrance door to the vestry. 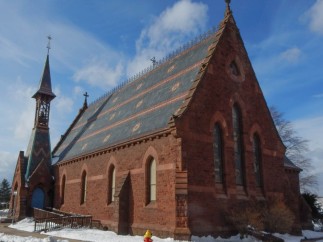 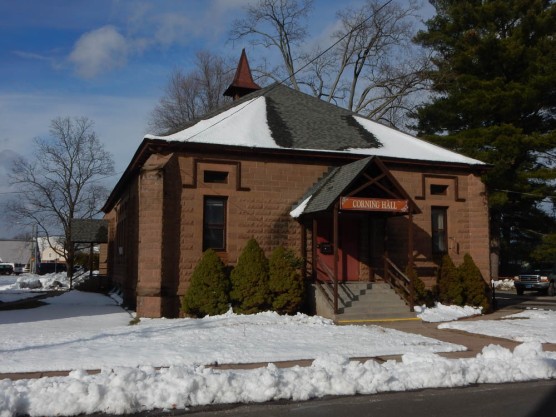 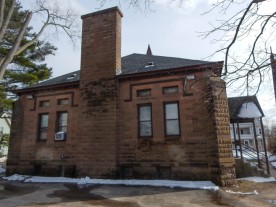 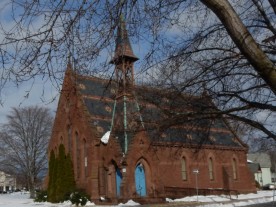 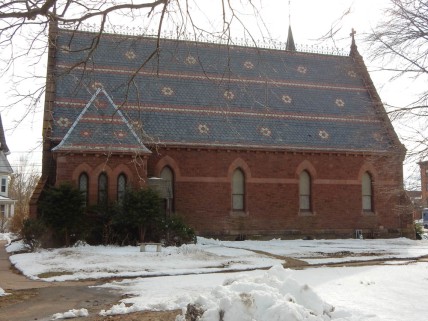 North side of the church. Window details of the vestry. 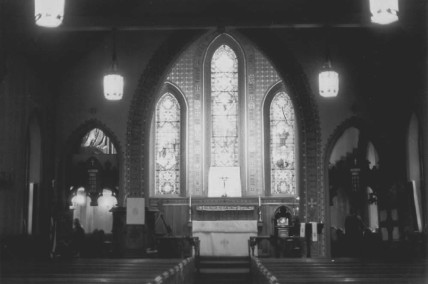 NRHP – Inside, looking east (toward back of church). 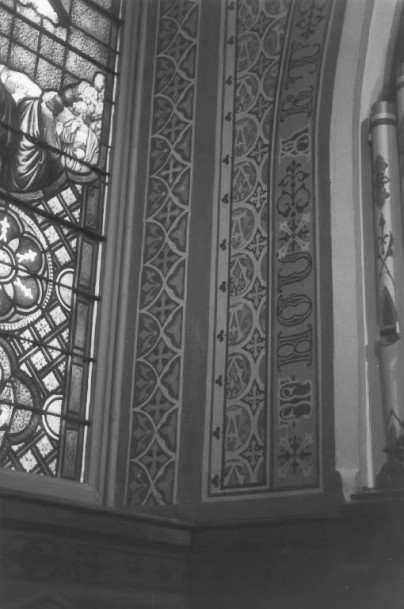 HRHP – Stenciling inside the church 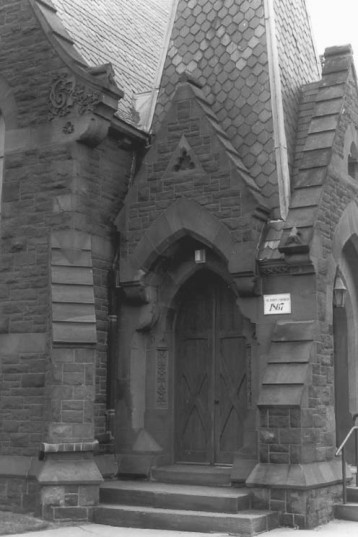 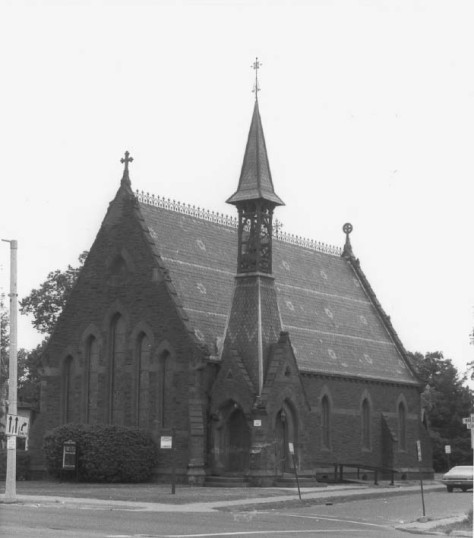 NRHP – This is the southeast corner of the church building. 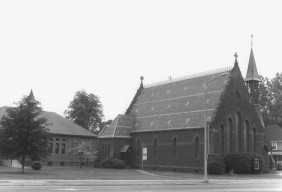 NRHP – Northeast corner. You can see a small Vestry at the northwest corner. 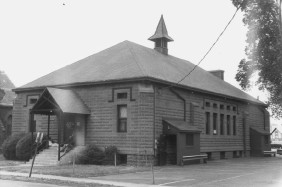 NRHP – Church hall, built from precast block, but with the look of brownstone and in the Victorian Gothic Style, including corner butresses and butresses near the windows, and a similar tower. 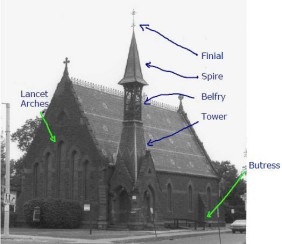 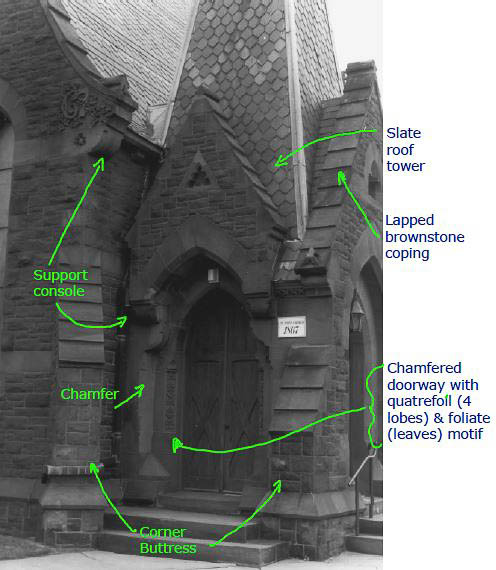