My new ‘back way’ home from work has brought me in contact with several interesting doors. In addition to the doors I featured from the library and town hall and those of St. John’s Church, I’ve collected several random doors. Those of you in the door business know how that goes – you’re photographing the doors you’re interested in, and suddenly every door looks like a potential star. You use the main doors but decide not to use the other ones. Then, one day you find yourself with a bunch of understudy doors waiting for a chance to get on stage.

I kept thinking that I’d find a reason to talk about my work day. This week, I have just such a reason, and the reason is characterized by the featured door. You’re probably thinking: “it looks empty and dark.” That’s because it is EMPTY and dark!

That’s the office of a former training center for a Hartford-area financial institution and my coworkers and I could not be happier that they have moved o-u-t-out. The regular employees were nice enough people, but the students were slobs. You could tell when they were holding a class, simply by opening the door to the Men’s room (and, I’m told, the Ladies’ room). I’ve seen cleaner bathrooms in gas stations. The floors would be covered in paper towels, the sinks, counter and surrounding walls would be dripping with water, as if someone had given a dog a bath. I won’t take you any farther into the room, but let your imagination run wild. It would sometimes be so bad, that I would walk down to use the Men’s room in the lobby.

I don’t know what it is about people that makes them think that the floor is as good as the trash can, and that others should have to deal with their mess. However, I do know that you came here to see doors, and I have a collection of understudies ready to fill in for more famous doors.

Thursday Doors opens with a new cast, every Thursday in the Frampton Center for the Performing Arts in downtown Montreal, Canada. Thanks to Norm Frampton, Ltd. Each week’s production features stars, understudies and swings from around the world. Produced and directed by Norm, himself, the pageantry of a Thursday Doors run is not to be missed. Put on your finest jammies and robe, fill your glass with orange juice and head to the theater. Look for the usher – a stylish little blue frog – who will gladly seat you for the opening. Feel free to bring your own doors, there is always room in the cast, and even the extras shine.

Today’s gallery includes some doors along Main St. in East Hartford. I like them all. I’ve tried to explain in the captions. You can click on any photo to start a slide show if you want to read them. Note: The “usher” is a composite of icons from The Noun Project. I have a subscription, but I’m happy to attribute the work to them. You can use thier work for free, with attribution.

The tenants who left also had offices at the other end of our floor.

A dance studio and a barber shop and I suspect, a number of apartments in a beautiful building.

The doors are somewhat plain but the brick and stone details are amazing. 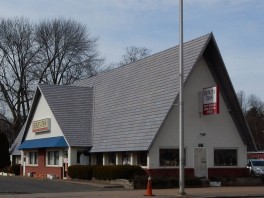 If you’ve been around as long as I have, you know that this used to be an iHop. Mmmmm, pancakes.

East Hartford Trust Company. The little red box in between the windows on the left side says “Vault Alarm.”

The Hooker Building – Thomas Hooker is known as the founding father of Connecticut. He spend a good deal of time on the east side of the CT River, before East Hartford was a separate city.

I love the spiral staircase up to the fire exit for the second floor.

Augie & Rays – Hot dogs, hamburgers, fries and the like. This is about 1/4 mile south of Pratt & Whitney’s main plant. My friend John and I have lunch hear a couple of times a year.

The Prospect Cafe – Looks like a good place for a quick bite and a beverage.

Comstock Hall was built in 1899 to house a theater (later converted to a roller-skating rink and then demolished) and offices.

There is a fairly large bottling plant in East Hartford.

The south end of Pratt and Whitney’s (jet engines) main plant. That overhead door at the lower left is pretty big.

I’m not sure if this firehouse is still in operation. I’ve never seen any signs of life as I drive by. 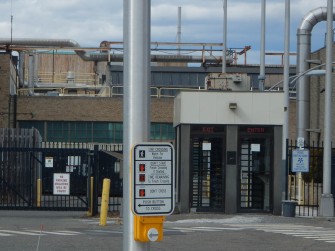 Comstock Hall – The two buildings are joined by a continuous first-floor storefront cornice, but the 1899 structure is taller and has a more elaborate classical revival design.

Wells Hall looks like it might have been a school. It’s now home to the Board of Education.

A boarding house with some retail on the lower level.