A couple of years ago I was going to surprise none other than Norm Frampton with a quick doorscurrsion when he breezed through the Hartford area. Norm and I had been planning to meet and to have lunch at Tunxis Grill, as he and his wife traveled from New York north to Montreal. They were heading into Vermont that evening, and It didn’t seem like there would be time to go looking for doors, but as I said, I had a surprise. Less than a mile from the restaurant where we planned to meet is the stately St. Joseph’s Catholic church.

I was going to surprise Norm, but a bad bit of photographic luck brought a bigger surprise to me. Early in the week of Norm’s visit, scaffolding went up around the church. Oh well, the people were great, the food was great, and the beer was cold, so all was not lost.

St. Joseph’s fell back into my someday-when-you-need-an-easy-door bucket. Unfortunately, when that day came, the history of this church made the photography more complex than I planned – it now required pictures of three churches.

St. Joseph’s is located in what is known as the Poquonock (po-qwan-uck) section of Windsor. Windsor is arguably Connecticut’s first town. Several of its neighboring towns used to be part of Windsor. The town split into sections, some sections became their own towns and we’re left with South Windsor being directly east of Windsor (across the CT River) and East Windsor being north of South Windsor. Windsor Locks is north of Windsor. To the west and northwest of the original settlement, Windsor retained control over large sections of farmland, much of which has been developed. Poquonock is in that general area, but neither remains agricultural, nor has it been commercially or industrially developed to excess. It is a pretty area, home to the bar I have been known to visit as well as Elm Grove Cemetery which was featured among my earliest door posts.

Falling between towns, Poquonock’s spiritual matters were originally assigned to the guidance of priests in Hartford, and then in 1852, to St. Mary’s Church in Windsor Locks. Downtown Windsor’s Catholics were also under the parish umbrella of St. Mary’s from 1852 until 1892 when St. Gabriel’s Church in Windsor was established. In 1892, St. Joseph’s was made an independent parish, and St. Gabriel’s began independent operation in an old Episcopal church in downtown Windsor. The current St. Gabriel’s was dedicated in 1916. In 2017, as Catholic parishes struggled to maintain sufficiently large independent congregations, Saint Joseph Parish and Saint Gabriel Parish were merged into Saint Damien of Molokai Parish

Although I failed in my attempt to share a few New England doors with Norm, I should not fail to point out that he remains the organizer and administrative head of the legions of door gatherers across the world. Each week, a large number of door aficionados find, photograph and organize images of doors. Then, we head north to Norm’s site, where the little blue frog grants us passage into the large gallery of doors. Check it out – take a look at Norm’s doors, click the blue tadpole and share your doors, or just take in the vast quantity of doors on display.

Today’s gallery includes St. Joseph’s (as it still is being called) and a few photos of the churches of St Gabriel and St. Mary.

The truck on the right is parked at the bar. The tall steeple above the trees on the left is St. Joseph’s. 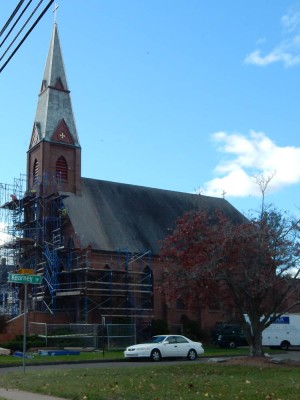 There are some doors behind the scaffolding.

The week before Norm arrived.

Norm shared this photo earlier – no doors, but a very good day.

The brickwork is beautiful. 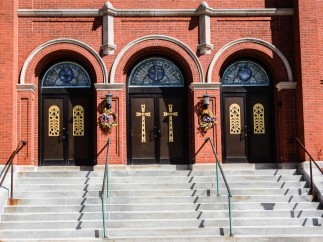 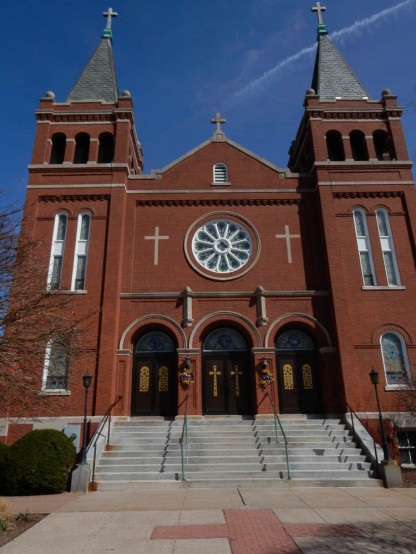 Along side St. Joseph’s Church

I wish I had a wire filter, but…

A lot of history in a few miles.

St. Mary’s – Windsor Locks, CT, from the back 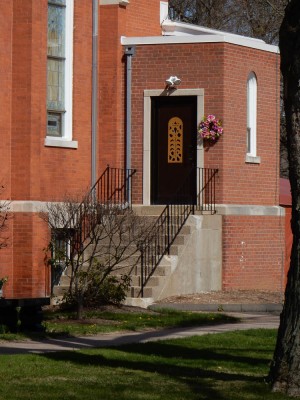 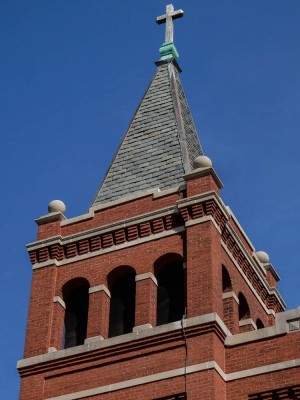 Brickwork on the bell tower of St. Gabriel’s.