No, I haven’t written a story. However, if you believe all the hype about Big Data and artificial intelligence (AI), you would think imagine realize that I didn’t have to. That story can be gleaned from everything I’ve ever bought online, tweeted about, posted on Facebook and described on LinkedIn – except that’s not me. I mean, it is, but only from the point of view of the gatherer. That seems to be what the up-to-snuff organizations who are pouring money into AI and Big Data, like the proverbial drunken sailors of yore, seem to think. Hmmm, what kind of confidence level should I have when “seems to be” is in the same sentence as “seems to think?” Is “seem” additive or multiplicative? Maybe they cancel each other out like a double negative…

I raise that silly question because I don’t think the data-mining people, or the data-mining robots the data-mining people programmed understand the data they’ve collected. As evidence, I give you an example from one of the data-miningest organizations on Earth – IBM. The folks who brought Watson to Jeopardy, remember Watson? He’s still out there…he’s a product now, or rather a service. You can hire Watson to figure stuff out for you. I know, because IBM keeps offering to have Watson figure stuff out for the company I work for. If Watson could read, perhaps, oh, I don’t know, maybe our website, he would know how crazy an idea it would be for us to employ Watson.

That’s not fair, Watson reads, he just doesn’t read like you and I read. He sifts through written words, looking for keywords and maybe placing them in context, but again, the context seems limited. I think we’re at ‘seems’ cubed – Seems3 – for shorthand. Seems times seems times seems (does it seem like I am intent on pushing math into my Monday posts lately?). I ask that, because you might have noticed that trend – Watson might not. He might not notice the degree of snark going on here (I’m trying to be subtle) or the humor (I’m not trying to be subtle, you can laugh) or the fact that I am baiting him and all the other Watson-wannabes.

You see, within hours of this post being published, if previous behavior is to be used as a predictor of future activity, somebody will follow me on Twitter, put an ad up alongside my Facebook timeline or pop something up over what I’m trying to read, and that thing that will talk about Watson, Big Data or AI.

Then they will tell me their story. They didn’t read mine. They don’t care about mine, and they don’t even care if I care about theirs. Well, they do, but not the they they. The they that cares are the people or robots, probably robots, who select what ad to put in front of me. They make money if I click on their ad, or if they are the annoying kind of person/robot, if they can make it pop open, start playing or burst onto the screen with little hope of escape. Oh, wait, that’s the story I wanted to share about IBM.

This post isn’t about Watson at all. Of course, it’s too late for Watson to figure that out, or so it seems. Yes, seems4 – thanks for keeping track. How are you doing it? In your head? Most people don’t do even the simplest math in their heads these days. If you really cared, you might have a note on the bottom of a piece of paper, or your napkin, or maybe a scribbling app that looks like “||||” by now. You’re waiting for the next ‘seems’ in proper context, to draw that diagonal line – Five! Woohoo!

Earlier today, I clicked on an IBM link that was supposed to lead me to a story about “Five Myths about AI” – Only, it wasn’t an IBM link at all, it was an IAM link. I guess IAM had a spot in the acronym draft 26 places ahead of IBM – get it? More math, now combined with football – sorry. The reason I associated the link with IBM is because before I could read the article, IBM popped a survey up over the screen. I couldn’t take the survey, because I hadn’t read the article, and because I couldn’t close the pop-up without taking the survey or saying, “no thanks.” I hadn’t read the article because I was eating cereal and I didn’t want it to get soggy.

Watson, or whatever robot popped up that ad, seemingly didn’t count on my eating cereal (yes, that’s seems5, go ahead, draw the diagonal, you know you want to). They gave me enough time to read the article, but not enough time to finish it and leave the page. They wanted me to complete that survey. They, by the way are The Washington Post. I’m sure they would have gotten a nickel from IBM if I had taken the survey. Instead, I closed the page.

So, IAM, IBM and the Post don’t know why I didn’t take the survey. They don’t know why I followed the link, but adding the fact that I did to my ever-expanding profile will ensure that I get another opportunity. If you’ve kept track of anything besides the Seems-Factor, you now realize that they don’t know that I made a mistake but they’ll predict future behavior based on that mistake. 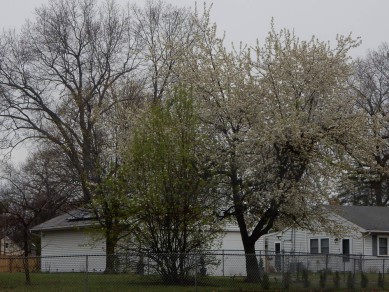 Spring is starting to show its stuff. 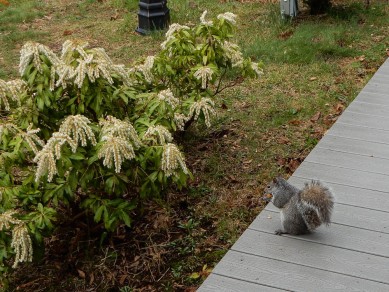 Rainy day. Wet squirrel, but he has a peanut, so he’s happy. 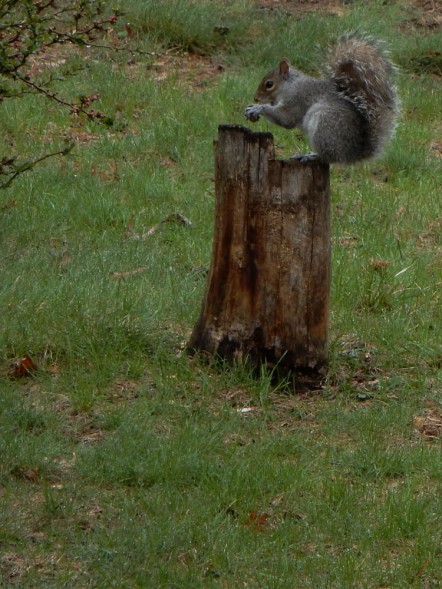 We almost removed this stump, but now, it’s a fixture in the yard. 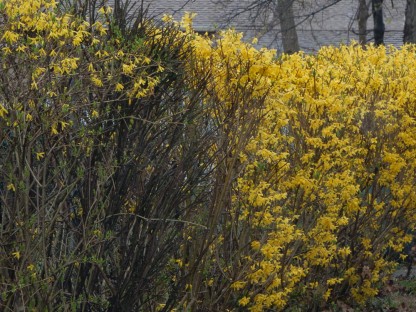 Our Forsythia is breaking out. 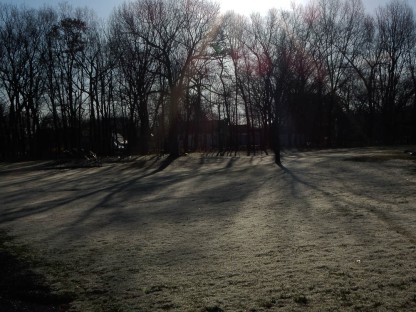 It won’t be long before this playground will be totally shaded when Maddie and I walk. 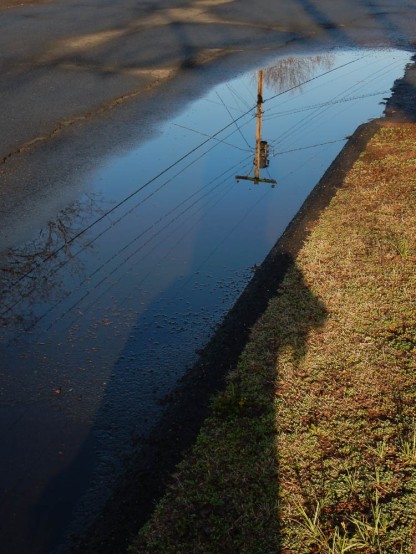 “I think my shadow adds to this photo.” 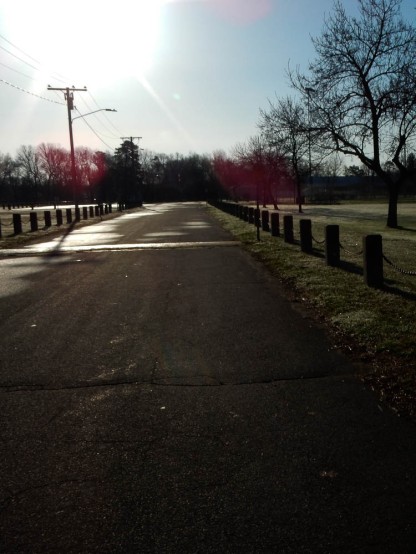 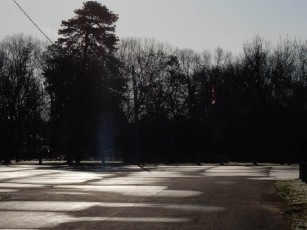 The geometric layout of the sun and shadows caught my attention. 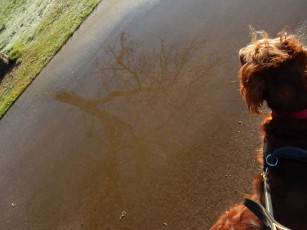 “I see it, but I don’t think it makes much of a picture without me.” 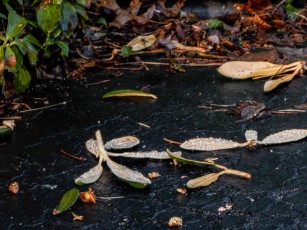 Last night’s storm brought some damage to the rhododendrons. 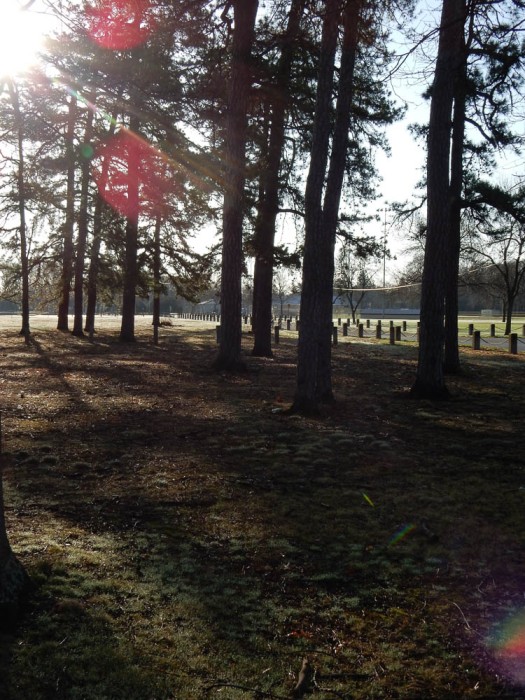 On our way home. That’s the path we took at the start. 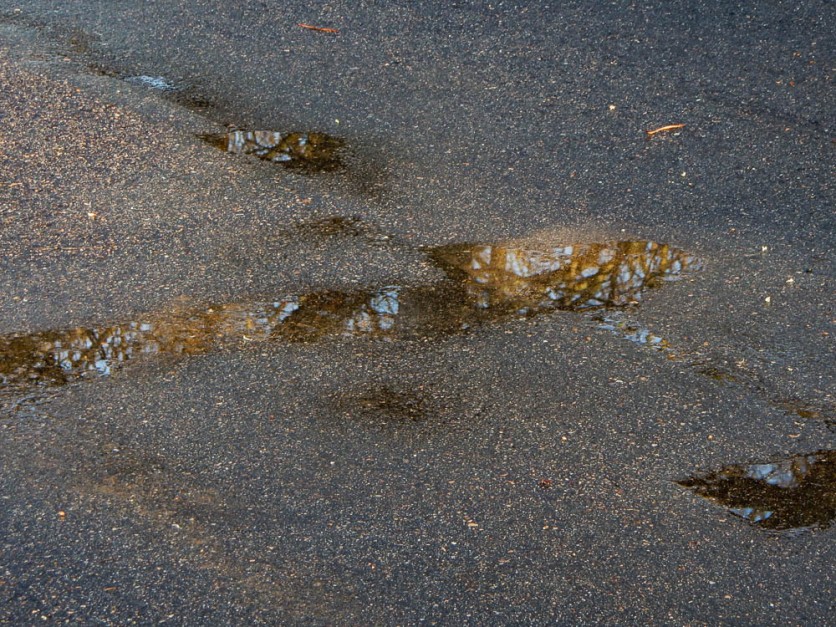